Chemistry - How were urolithins discovered and named?

The identification of urolithins as products of human metabolism of ellagic acid was reported by Cerda et al. in the European Journal of Nutrition in 2004. The full reference is

have also been found as constituents of ‘clover stone’, a type of renal calculus found in sheep which can also ingest large amounts of ellagitannins[26]. In fact, the metabolite d (3,8-dihydroxy-6H-dibenzo[b,d]pyran-6-one) has been previously named as ‘urolithin B’ [22, 26].

That explanation seems sufficient to understand the source of the name, but if you are interested in the specifics of the original discovery, reference 26 is to the Dictionary of Natural Products published in 1992 by Chapman & Hall, which is available only by subscription. Perhaps someone with access to that Dictionary can look up the entry on urolithin and provide more info.

UPDATE: Since this answer has received a decent amount of attention, I dug a bit deeper to find the references for the first isolation and naming of the compounds (thereby actually answering the question).

In 1963 at the 430th meeting of the Biochemical Society in Oxford, England, Nottle and Pope first reported isolating two compounds that they named "urolithin A" and "urolithin B". Their report was published among the proceedings of the meeting in the Biochemical Journal, which are available for free from the journal here. The full reference is

The Nottle and Pope report is on p. 67P. In that report, however, the structures of the urolithins were not described, as they had not yet been determined. In a subsequent paper, Pope reported the structures of the urolithins, noting that they were actually previously known compounds (specifically urolithin A is identical to pigment I of castoreum, isolated from beaver scent glands), but despite the compounds already being known, Pope and others continued to use the new name, which seems to have stuck. That report is also freely available from the Biochemical Journal here. The full reference is

As @Zhe says, the name urolithin A seems to have derived from the word urolith which is basically kidney stone. Quoting from here1:

The name urolithin was first given to two metabolites isolated from the renal calculus of sheep (Trifolium subterraneum has been reported as the cause of clover stone and might be a relevant source of ellagitannins) that were named urolithin A and urolithin B. These two molecules coincided with pigments I and II previously described from castoreum and beaver glands

Also, a strain helps metabolizing urolithin to isourolithin-A and was named accordingly2:

Recently, a specific strain also isolated from human microbiota was able to further metabolize EA up to isourolithin-A and was named as a consequence Ellagibacter isourolithinifaciens. Nonetheless, until now, no other bacterial strains that could metabolize EA to urolithins B have been reported.

OP's request: I am curious as to how it (urolithin) was discovered but cannot find the story.

3,8-Dihydroxybenzo[c]chromen-6-one or 3,8-dihydroxy-6H-dibenzo[b,d]pyran-6-one (CAS #: 1143-70-0), now known as urolithin-A is first discovered as a metabolite of ellagic acid from mice in 2003 (Ref.1) by the same research group who also discovered that in as a metabolite in humans later as Andrew noted elsewhere: 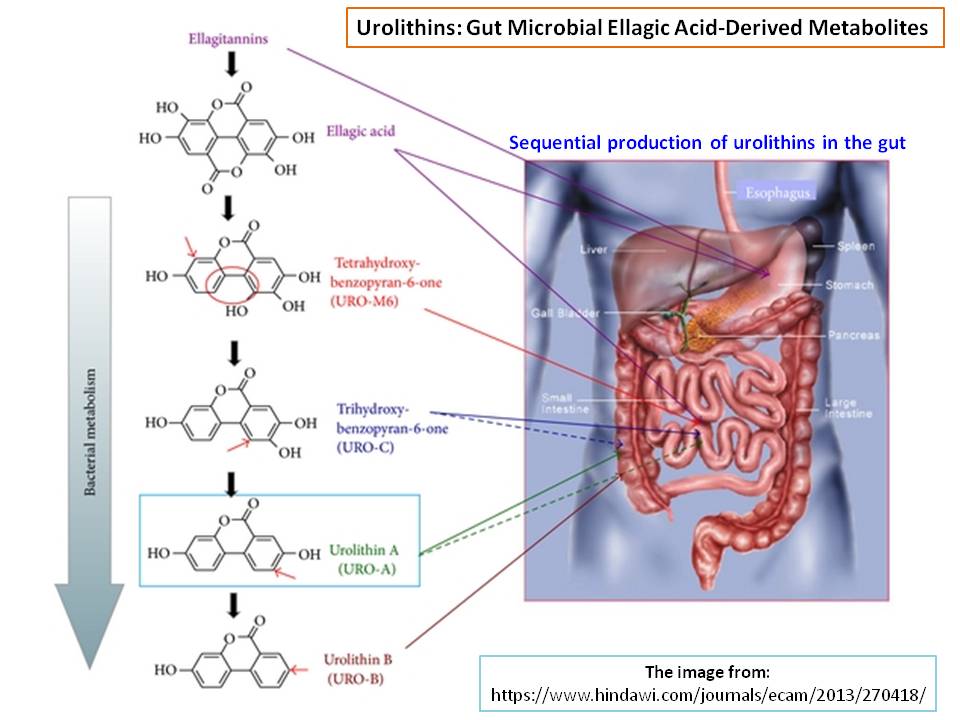 However, given that urolithin-A has a CAS number of [1143-70-0] (and 3-Hydroxybenzo[c]chromen-6-one or urolithin-B; CAS #: 1139-83-9), it should have been known for an awfully long time. However, the important biological activity of this group of compounds is not known until 2003, yet keep in mind that pomegranate (Punica granatum) fruits have been used for centuries in folk medicine. The antioxident activity of this specific fruit was scientifically analyzed in 2000 and compared to that of red wine and green tea (Ref.2). However, urolithins are not identified, but the presence of ellagic acid ($301 \ m/z$; $\mathrm{M-1}$ peak) was confirmed among others with similar structural features such as gallagic acid ($601 \ m/z$; $\mathrm{M-1}$ peak). The presence of punicalagin ($1083 \ m/z$; $\mathrm{M-1}$ peak) was also confirmed. Following is the proposed metabolic path of urolithins (Ref.3): 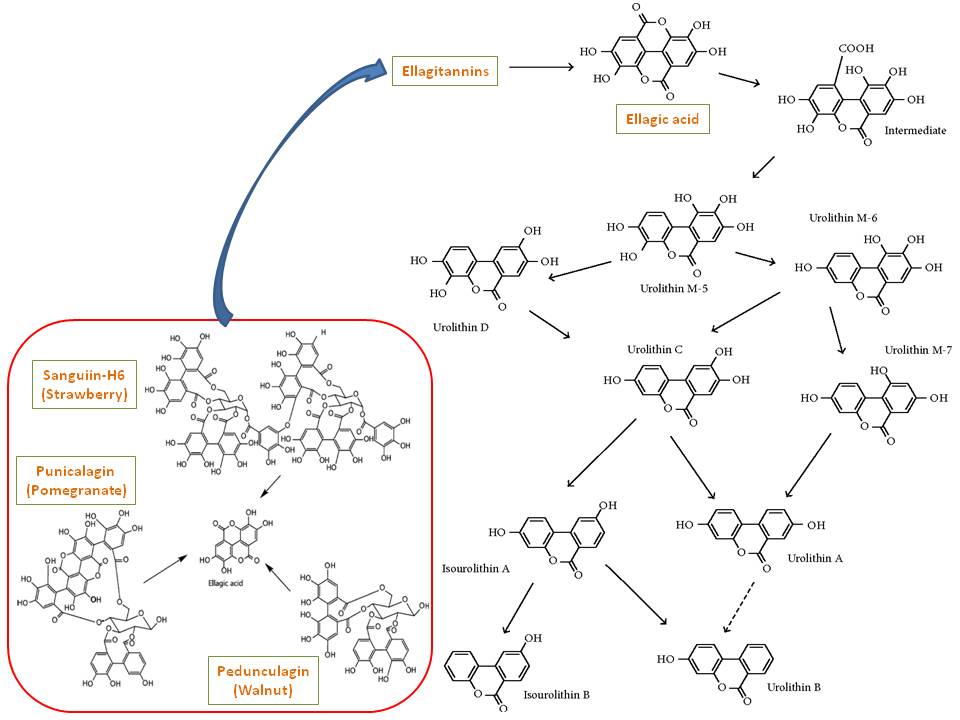 It is interesting that the very first modern reference to urolithin and its identification is in 1963 in the article cited as Two constituents of clover stone, a type of urinary calculus found in sheep by Nittle, M. C.; Pope, G. S., in Biochemical Journal, 89(1), pg 67 is wrong even in SciFinder and in Google Scholar. If we check the journal website, there is no such paper with this title. I am surprised. Can anyone double check?

Anyway, looking up German sources from Google books from 1836 brings up a Homeopathy Pharmacopea, here. It shows the Greek etymology of urolithin, which is obvious "der Harn = urine" and "Stein = stone".

However, this "Urolithin hominum" indicates that is referring to human urine stones, but at least the etymology is confirmed :-)

Chemistry - Could blue flames arise within the hull of a burning ship? Chemistry - Defining general acidic strength Chemistry - Help with determining concentration of magnesium hydroxide for a specific pH level Chemistry - Mechanism of conversion of Cr from FeCr2O4 (chromite) Chemistry - Why does the internal energy increase when ice melts to give water? Chemistry - Limitations of Henry's law Chemistry - What does K° signify in this reaction? Chemistry - Identification of the organic compound Chemistry - What happens when an alkyne reacts with ammoniacal Cu2Cl2? Chemistry - Methylene "anti" Jahn-Teller effect Chemistry - Chemical elements or compounds with yellowish white color Chemistry - Conversion of molecular structure into Fischer projection for compounds having more than two chiral carbons
Pandas how to find column contains a certain value Recommended way to install multiple Python versions on Ubuntu 20.04 Build super fast web scraper with Python x100 than BeautifulSoup How to convert a SQL query result to a Pandas DataFrame in Python How to write a Pandas DataFrame to a .csv file in Python