To do this exercise, you must need to know how to assign stereo configuration according to Cahn–Ingold–Prelog priority rules, and what Fischer projection represent. First, get correct assignment of three stereo centers in the given molecule. That should be $(1R,2R,3S)$ as depicted in the image: 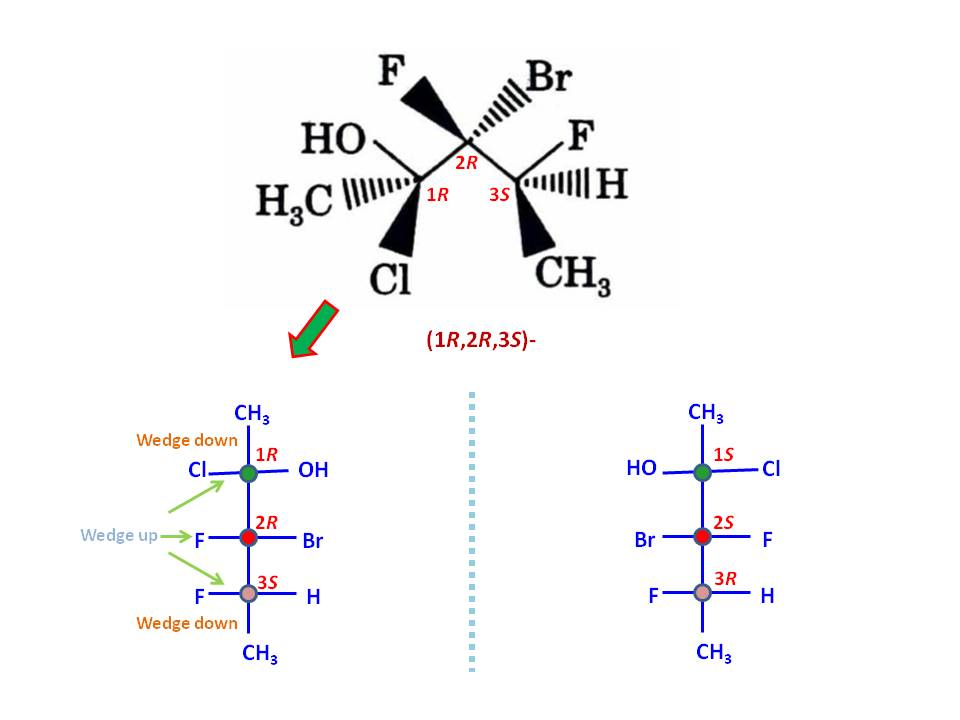 Note: You can exchange any group at a stereo center with another group at same center to reverse the configuration, e.g., $(R) \rightarrow (S)$. If you repeat same with two different group, you get back the original configuration. Once I was done with assigning the groups, I have performed these operation twice to change the positions of three groups at stereo center 3 to my likeness. Still, the configuration remains same.

To get the enantiomer, you can sketch the mirror image of the compound, which is $(1S,2S,3R)$ as depicted in the image and also tally with the given answer for the corresponding enanthiomer.

You can arrive at the answer without assigning R and S if you build a model or do some mental contortions. The conformation should be all-syn with respect to the atoms on the vertical axis (like it is for cyclic structures, e.g. sugars in the furanose or pyranose form). Then, you can simply read off which groups are on the left and on the right.

In the starting model, the molecule is in an all-anti conformation. After changing the C2-C3 and the C3-C4 torsion angles by 180 degrees and turning the molecule, you can verify the given answer.

EDIT: I missed the part about drawing the enantiomer of the given structure, and the stereochemistry of my model does not match that of the question, but the process would be the same for the correct stereoisomer.

In general terms, if you start with a wedge-and-dash representation with the molecule in horizontal orientation, the substituents pointing towards you will end up on alternate sides of the Fischer projection, as indicated in the following illustration:

The reason is that for each chiral center, the atoms bound on the top and bottom of the atom should be behind the plane of the paper. This is only the case for atoms that are on top of the zig-zag horizontal structure after the molecule is rotated such the the "top" label is on top, and the "bottom" label is on the bottom. For the other chiral centers, left and right get switched when looking at them in the correct orientation.