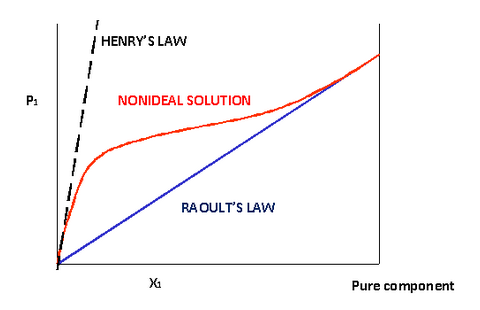 If you think of Raoult's law as a special case of Henry's law (since in both cases the vapor pressure of a substance is proportional to its mole fraction in solution) then there isn't really a problem.

where $K$ is equal to $p*$, the vapor pressure of the solute in the pure liquid state, is the case of a substance exhibiting ideal Raoult's law behavior over its entire concentration range.

However, if $K_H$ is not equal to $p*$ then Raoult's law is not observed over that concentration range, and this is then a more general case of Henry's law with an upper concentration limit on the ideal behavior of the solution. Where that limit is somewhat arbitrary, it occurs when the solute deviates sufficiently from the extrapolated behavior under dilute conditions. In fact, the best way to understand Henry's law is as a limiting law applicable strictly for infinitely dilute solutions:

that is, the constant $K_H$ is defined as the slope of the curve of p versus $\chi$ as the concentration goes to zero.

Where the deviation from linear behavior is observed and the law is violated is in general an empirical question: we apply Henry's law when it works well enough, and not beyond that. The ideal behavior in both Raoult's and Henry's laws means, as explained in another answer, that where the rules apply the behavior of the solute in solution does not depend on its concentration. Note however that even an associating or dissociating compound is expected to display Henry's law behavior at sufficiently low concentrations.