The Jahn-Teller effect is not relevant here. The triplet state is observed in many molecules to be of lower energy than the singlet. The Pauli exclusion principle, makes the states symmetric or anti-symmetric to the exchanging electrons.

A triplet state has unpaired spins while in a singlet they are paired. The triplet is lower in energy than the corresponding singlet. One reason for this is that the electrons try to ‘avoid’ one another in the triplet; (see Salem 'Electrons in Chemical Reactions', publ Wiley 1982 for a detailed discussion). This means that the spatial part of the triplet wavefunction is asymmetric to exchange of the electrons;

The numbers in brackets refer to the electrons’ coordinate. As the total wavefunction is anti-symmetric to exchange of electrons the corresponding spin parts have the opposite symmetry to the spatial parts.

If the spins are on two separate atoms then the singlet and triplet energies can be very close to one another and the order can be changes by external magnetic fields. There is more detail on this effect in this answer How does spin flipping of triplet carbenes occur?

Short answer is that it requires advanced computational methods to determine which state is lower in energy, but we can rationalize the observed result by investigating the behavior of the canonical delocalized molecular orbitals of the $\ce{CH2}$ carbene.

What follows here is a summary of information found in chapters 7 and 8 of the second edition of Orbital Interactions in Chemistry by Albright, Burdett and Whangbo (Wiley & Sons 2013). I would encourage you to read that text for a fuller understanding.

First, let us consider the Walsh diagram of $\ce{SH2}$ as a representative molecule of the form $\ce{AH2}$, where "A" is any element. In the diagram, the vertical axis represents energy, while the horizontal axis represents the H-S-H bond angle. The shapes of the molecular orbitals at the extremes of bond angle are depicted on each side. 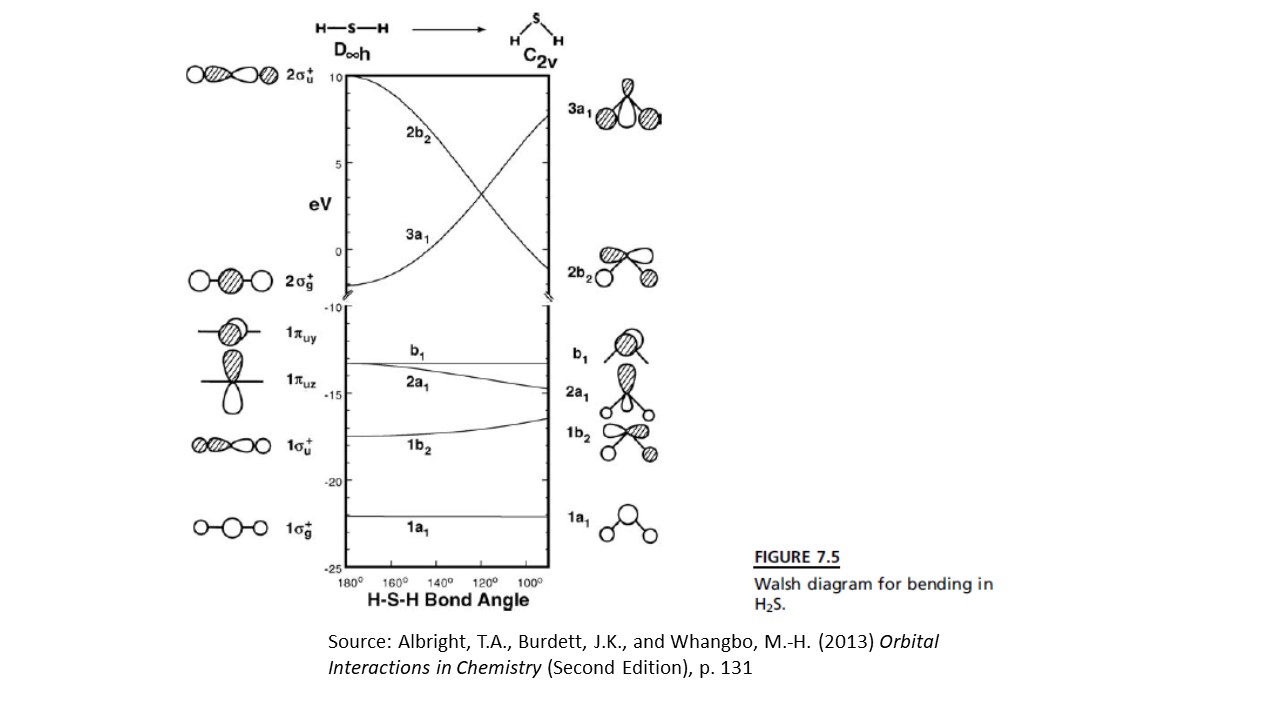 Although this diagram specifically applies to $\ce{SH2}$, it can be considered as a qualitative representation of any $\ce{AH2}$ molecule.

When the bond angle is decreased, however, the $p$ orbital that is in the plane of the bend is lowered in energy by its interaction with the H $s$ orbitals. There is also a corresponding increase in energy of the lower $1b_2$ orbital, but its destabilization is less than the stabilization of the $2a_1$ orbital. This loss of orbital degeneracy coupled with a decrease in molecular symmetry is an example of a second-order Jahn-Teller distortion.

What this analysis has ignored, however, is that there is an energetic cost to placing two electrons in the same molecular orbital, as porphyrin described well in another answer. When we add a second electron to an orbital, its energy is raised a bit, a change which is not shown on the Walsh diagram (or typically on any MO diagram). So now we must compare two competing energy changes - the difference between partially-filled $2a_1$ and $b_2$ orbitals (i.e. the triplet state) vs completely filling the $2a_1$ orbital. This comparison is further complicated by the variable of the bond angle. In the singlet state, two electrons are in an orbtial stabilized by an increasing bond angle and two are in an orbital that is destabilized, whereas in the triplet state, only one electron is in an orbital that is stabilized and two are in an orbital that is destabilized. As a result, the optimal bond angle for lowest energy is different in each one. Finally, the starting energies and the slopes of the energy changes as a function of angle are specific to each molecule (e.g. they will be different for $\ce{SiH2}$ and $\ce{CH2}$ even though the number of valence electrons is the same). Altogether, this means that our qualitative analysis is not sufficient to determine whether the triplet or singlet state is lower in energy. We must rely on more complex quantitative methods.

With those quantitative methods, we find that the triplet state is lower in energy for $\ce{CH2}$, as shown in this diagram: 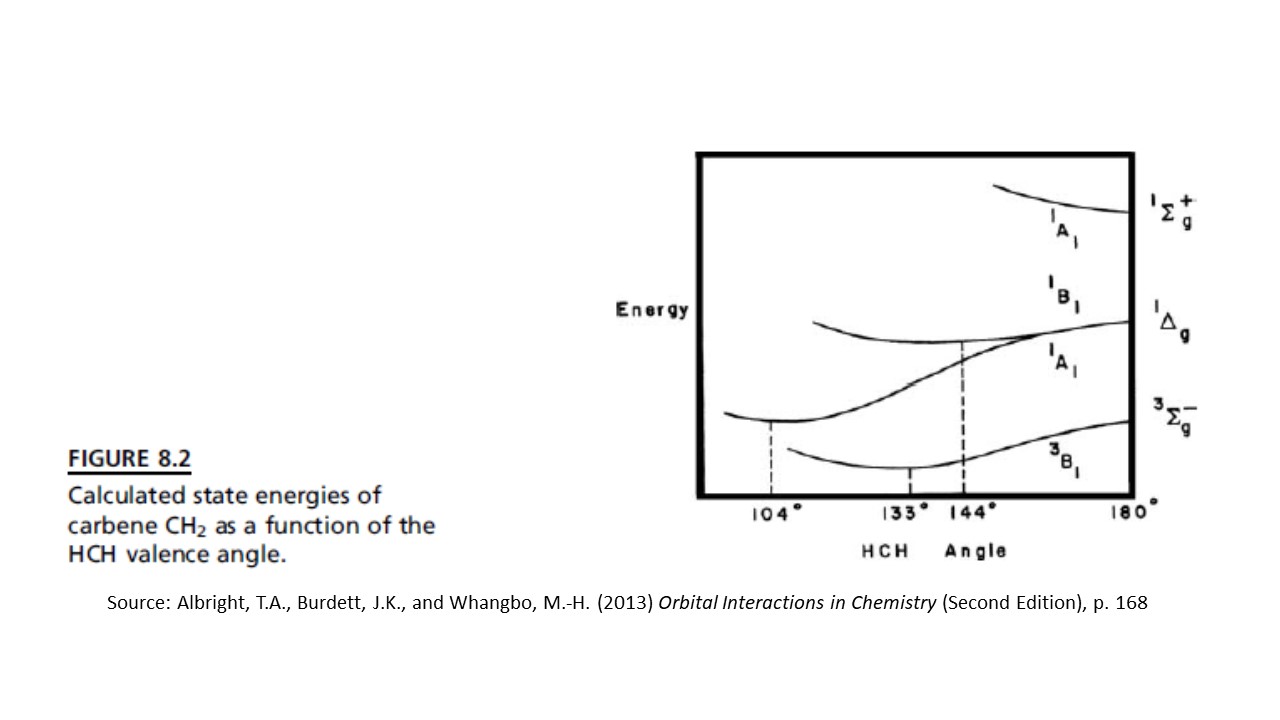 It is important to note that this result is not general. In both of the similar molecules $\ce{SiH2}$ and $\ce{GeH2}$, the singlet state has the lowest energy minimum.

This result is rationalized on the basis that the valence $p$ orbitals of carbon are more contracted than those of Si or Ge. This contraction means that the penalty of putting a second electron into that orbital (as in the singlet state) is greater for carbon than the large elements. Additionally, the stabilization of the $2a_1$ orbital as a function of bond angle is less for carbon than for the larger elments, but this effect is less important.