Chemistry - What are high-energy electrons?

transported electrons in $\ce{NADH}$ have a higher energy than those in $\ce{FADH2}.$

$\ce{NADH}$ is the stronger reducing agent.

Could anyone come up with a definition understandable by this non-chemist (i.e. me)?

Do they mean that when these electrons are transferred to the electron carriers they are part of molecular structures in which they sit in high energy positions?

It has to do with how tightly the electrons are bound in one and the other electron carrier. The OP is correct to place the term "high-energy" in quotes when referring to electrons; electrons are indistinguishable, so their energy is with respect to the bound state that they are in.

@KarstenTheis made it clear by using E0 values of each half reaction. Here I describe what they actually mean by using the phrase "high energy electrons" in biochemistry texts. Consider Ethyne and Ethane.

Therefore Ethynide has a high energy electron compared to Ethanide

Another Example : H- , OH- , SH- . H- is stronger than OH- and OH- is stronger than HS- in the terms of basicity. We can say that H- has more active electrons compared to those 2. Therefore in the opinion of biology systems , its electron has more energy.(discussed more in the upcoming paragraphs)

High Energy Electrons do mean the unstable electrons present in the biochemicals. These biochemicals are unstable because they've missed aromaticity ,their previous octet configuration or became radicals etc. therefore they have high Gibbs energy.

Look at NAD+ , FAD and their reactions 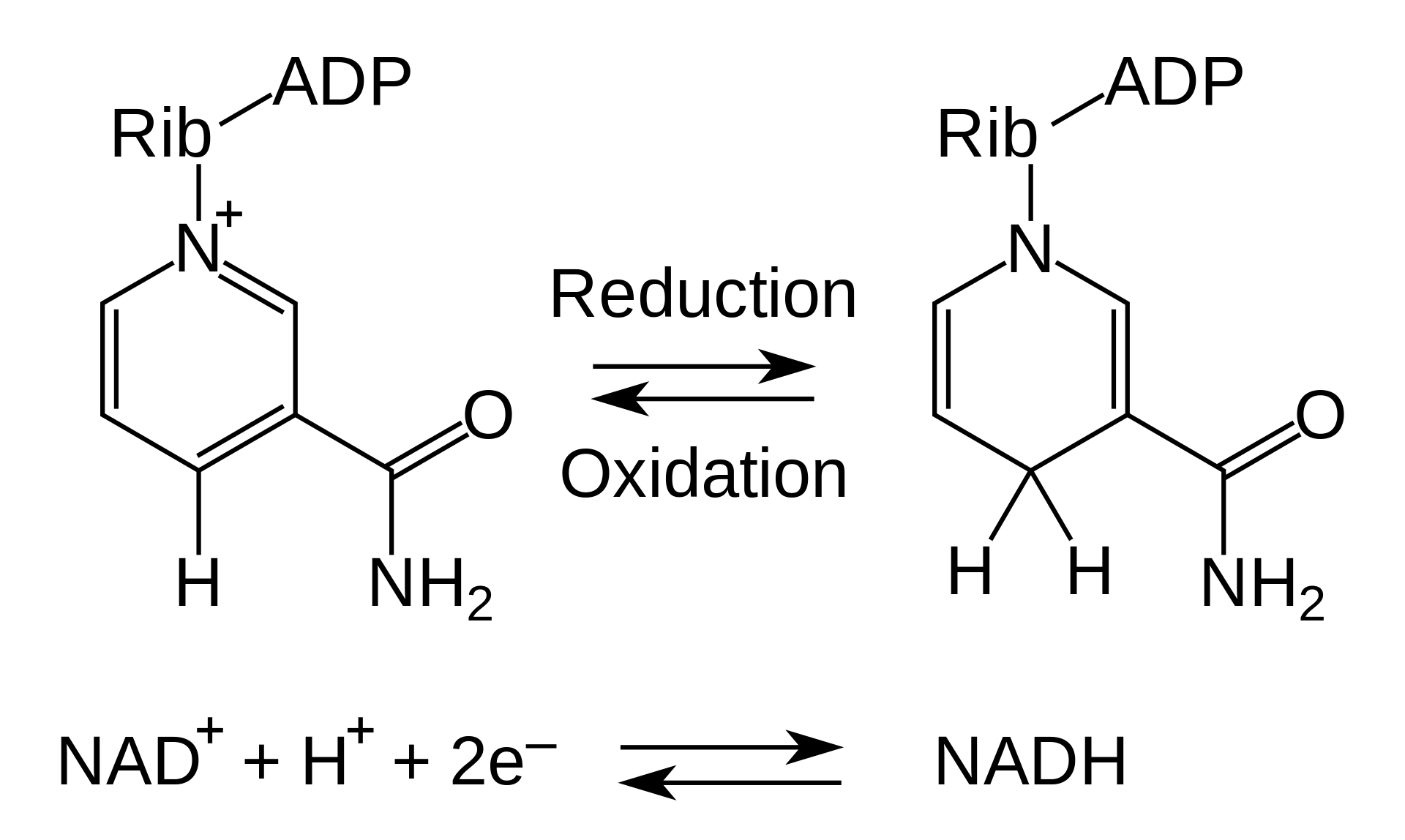 NAD+ loses its entire aromaticity by the reduction. This makes the reduction reaction ,to some extents, thermodynamically unfavorable for NAD+ (compared to FAD). This is why E0 of FAD is bigger than E0 of NAD+.

As I said Reduction of NAD+ is less favorable than reduction of FAD. Therefore NADH is more unstable/has high energy electrons than FADH2 and you can say that electrons in NADH are more accessible because they want to gain their aromaticity back.(not because of the radius). So NADH is more reactant than FADH2.

EDIT: This just came to my mind. In biochemistry texts , usually they say that "covalent bond between carbon and carbon in sugars, has a lot of energy that eventually gives the energy to NADH,FADH2 and later for ATP."

This highness of energy comes from the oxidation number of carbons in sugars(e.g. glucose) . See this

Each of them eventually participate in a CO2 by-product. The oxidation number in CO2 is +4. This results in huge movement of electrons from glucose to 6 CO2 molecules, hence the term "high energy covalent bonds in glucose". In one instance i.e. reduction of NAD+ to NADH in Step 6 of glycolysis , there is a nucleophilic substitution , HPO4(-2) acting as nucleophile and interestingly H- as leaving group. Here, the attack of Pi and the exit of H-(carrying electrons) , oxidizes the aldehyde carbon located at the end of the molecule.

Hydrid acting as a leaving group , is an interesting concept. look at Cannizzaro reaction . In the Step 6 of glycolysis, Aldehyde becomes oxidized into phosphonic acid and later carboxylic acid (reducing another particle- NAD+) ,While in Cannizzaro reaction , an aldehyde becomes oxidized into a carboxylic acid ( reducing another particle- another aldehyde).

Chemistry - Meaning of the Term "Heavy Metals" in CofA? Chemistry - Why is '-ethane' in 'methane'? Chemistry - Stereoselectivity of ring closure in intramolecular iodolactonisation Chemistry - If x and y are 2 extensive properties of a system then is x/y always intensive? Chemistry - Rusting in every other bar Chemistry - Insight into covalent bonds from electrostatic perspective Chemistry - Why is chemistry unpredictable? Chemistry - Placed in equivalent freezers, would a liter of water or a liter of lava turn from liquid to solid first? (question from a 6 year old) Chemistry - What is the equation for the reduction of water? Chemistry - Understanding the Jahn–Teller elongation and compression for octahedral complexes (stabilisation/destabilisation of d orbitals) Chemistry - What is the intuition behind 'mol' as a unit 'symbol' Chemistry - Synthesis of Pyrene from Benzene
Pandas how to find column contains a certain value Recommended way to install multiple Python versions on Ubuntu 20.04 Build super fast web scraper with Python x100 than BeautifulSoup How to convert a SQL query result to a Pandas DataFrame in Python How to write a Pandas DataFrame to a .csv file in Python