The results of the iodolactonization example presented in this question were published in 1982 by Bartlett, et al.1 While @Aniruddha Deb has captured the essence of the reaction, there is more than one product formed in the reaction. A more detailed mechanism is offered, an issue not addressed by the original authors.

Carbonate 1 is a racemate. No products derived from reaction at the remote 7,8-double bond were detected. Understandably, the rate of closure is faster for a 6-membered ring than a 7-membered ring. A transition state for ring closure for a reversibly formed iodonium species will be favored having the carbon chain R equatorially disposed in the transition state. Transition state 2 is favored over that of 5 because the latter encounters a gauche butane interaction. In the iodonium cation the C-C bond is shorter than the C-I bond thereby having the former of greater steric consequence than the latter. SN2 attack on the iodonium cation is favored by the more polarized carbonyl oxygen than the oxygen attached to the t-butyl group. In the latter instance, establishing a positive charge on this oxygen is counterproductive because it is adjacent to a partially positive carbonyl carbon. This objection is in keeping with why amides are preferentially protonated on oxygen and not nitrogen. The cations 3 and 6 are now poised to lose a t-butyl cation, which, given the solvent acetonitrile, may lead to Ritter intermediates besides t-butyl iodide. In the event, racemic cyclic carbonates 4 and 7 are produced in 69% yield with the cis-substituted isomer 4 predominating over the trans-isomer 7. 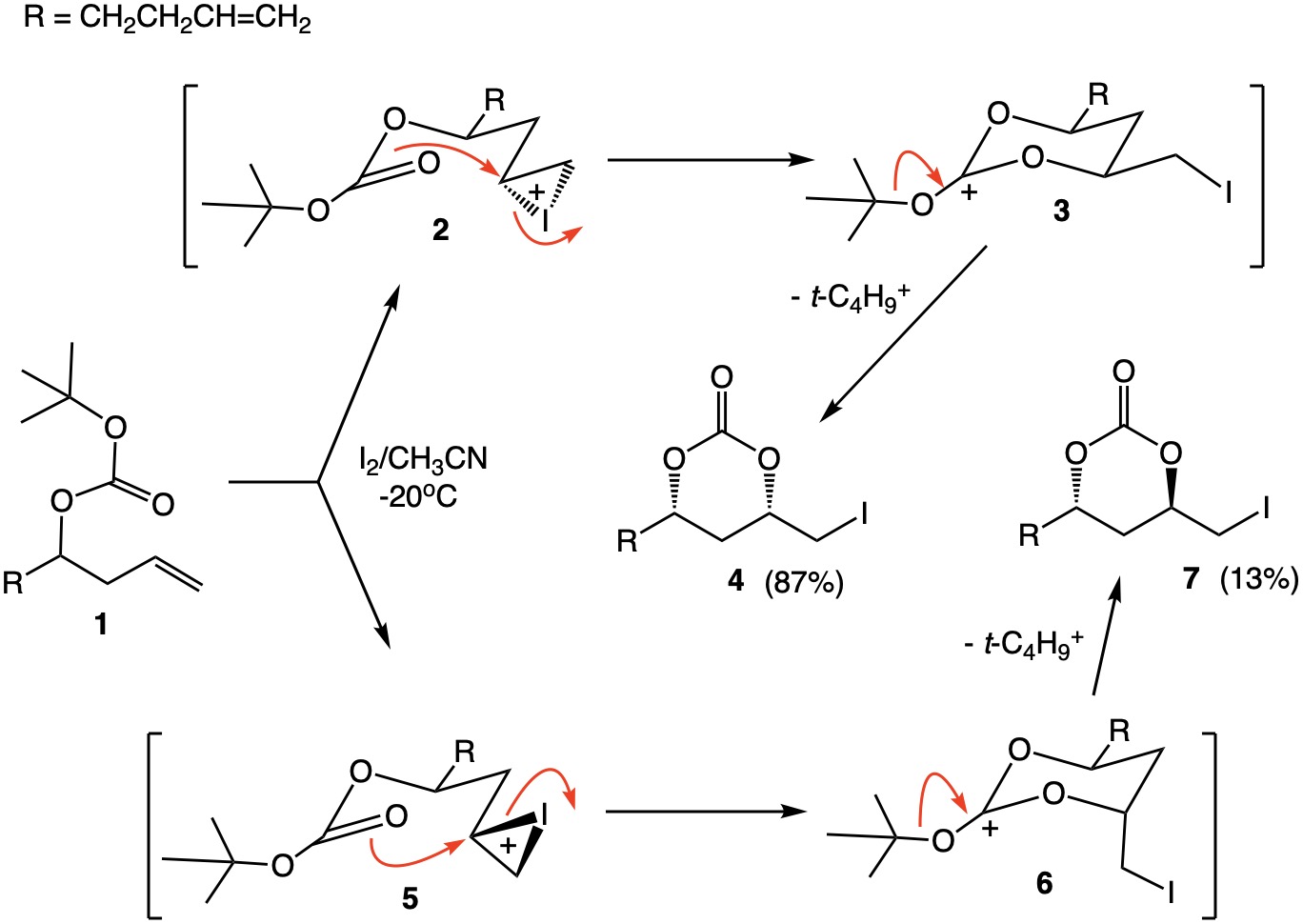 Without further details, I would say that both products are possible.

The reaction that you have given here is an Iodolactonization reaction. You have correctly identified that the tert-butyl group would be removed and that the oxygen atom would prefer to form a 6-member ring. In terms of stereochemistry, however, it is tough to make a decision, as:

Another note on the stereochemistry is that The iodine group would always be opposite to the attacking oxygen as this is an SN2-like reaction. Keeping these in mind, we can perform the reaction for the two different enantiomers of the substrate and see that both products are possible.

Chemistry - If x and y are 2 extensive properties of a system then is x/y always intensive? Chemistry - Rusting in every other bar Chemistry - Insight into covalent bonds from electrostatic perspective Chemistry - Why is chemistry unpredictable? Chemistry - Placed in equivalent freezers, would a liter of water or a liter of lava turn from liquid to solid first? (question from a 6 year old) Chemistry - What is the equation for the reduction of water? Chemistry - Understanding the Jahn–Teller elongation and compression for octahedral complexes (stabilisation/destabilisation of d orbitals) Chemistry - What is the intuition behind 'mol' as a unit 'symbol' Chemistry - Synthesis of Pyrene from Benzene Chemistry - What should be the nomenclature of this organic compound? Chemistry - Are crystallographic omit maps only used with molecular replacement? Chemistry - Does it make sense to differentiate the Arrhenius equation with respect to temperature?
Pandas how to find column contains a certain value Recommended way to install multiple Python versions on Ubuntu 20.04 Build super fast web scraper with Python x100 than BeautifulSoup How to convert a SQL query result to a Pandas DataFrame in Python How to write a Pandas DataFrame to a .csv file in Python