Chemistry - What is the equation for the reduction of water?

I get that this makes sense, but I have no idea how to derive it myself. Any help would be appreciated!

Good question because such questions were pursued by prominent physical chemists and Nobel laureates (Ostwald/ Nernst and Hoffmann).

The reduction of water can be tested visually and the apparatus to demonstrate it indeed named after Hoffman. Basically, it is an electrolysis of water experiment. What will see at the side connected to the negative terminal of the battery that it produces a gas, which is twice the volume as compared to the side connected to the positive terminal of the battery.

This gas which is very light, burns with a blue flame and it forms water again- so this must be hydrogen. Secondly, another interesting effect is that electrode region which is producing hydrogen becomes highly alkaline. If you put phenolphthalein indicator, the negative terminal becomes pink indicating an excess of OH(-) ions. 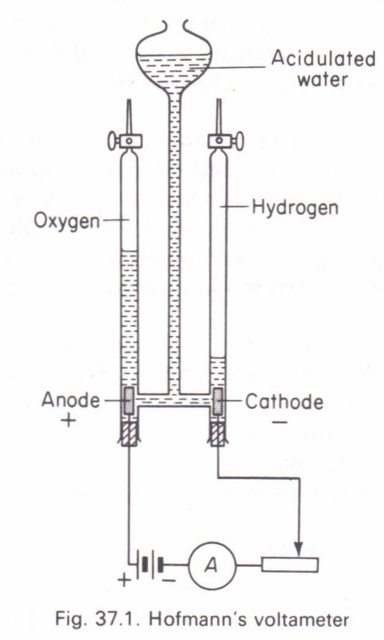 So three things can convince us with the following:

a) The electron rich electrode is the cathode in electrolysis cell. Water can gain electrons here. b) The cathode becomes highly alkaline during electrolysis c) The cathode produces hydrogen gas, which is twice in volume as compared to oxygen. d) You can even calculate the number of electrons used to produce a given volume of hydrogen from the measured current and the time.

First of all: Reduction is just a fancy way of saying "gain of electrons".

The posed question can thus be reformulated as:

What happens to water, if it gains more electrons?

As we can see, oxygen is already in its most reduced state. We know this, because oxygen has 6 valence electrons, with an oxidation number of -II this makes eight thus fulfilling the octet rule.

What can be reduced (i.e. gain electrons) here, is thus the hydrogen, going from +I to 0 (electrons are negatively charged, thus reducing the oxidation number).

Hydrogen with an oxidation number of 0 is the hydrogen molecule $\ce{H2}$. In $\ce{OH-}$, both atoms still have the oxidation numbers as in water. Now we just have to balance the reaction.

Reduction processes as posed here, “rearranges” the atoms upon taking up two electrons. One way you may have been able to “derive” or take a good guess is to consider the electrolysis of water, breaking water down into $\ce{H2}$ and $\ce{O2}$. In this case there has to be both an Oxidation and a Reduction. In the hydrolysis case, the $\ce{H2}$ is the product from the reduction process. This is because the $\ce{H}$ in $\ce{H2O}$, formally has a 1+ charge. The $\ce{H}$ [both of them] in $\ce{H2}$ has a formal charge of zero. The $\ce{H+}$ of water accepted an electron and now has a charge of zero – hence a reduction. Now, knowing the reduction product, simply balance the reaction.

Chemistry - Understanding the Jahn–Teller elongation and compression for octahedral complexes (stabilisation/destabilisation of d orbitals) Chemistry - What is the intuition behind 'mol' as a unit 'symbol' Chemistry - Synthesis of Pyrene from Benzene Chemistry - What should be the nomenclature of this organic compound? Chemistry - Are crystallographic omit maps only used with molecular replacement? Chemistry - Does it make sense to differentiate the Arrhenius equation with respect to temperature? Chemistry - entropy calculation in an irreversible process Chemistry - How to correct the pH and composition of bottled water? Chemistry - Why is entropy change in an irreversible adiabatic process positive? Chemistry - Questions Regarding Osmosis Chemistry - The importance of the cold chain in the food and the pharmaceutical industry Chemistry - Dipole moment of (1s,2s,3s)-1,2,3-trichlorocyclopropane
Pandas how to find column contains a certain value Recommended way to install multiple Python versions on Ubuntu 20.04 Build super fast web scraper with Python x100 than BeautifulSoup How to convert a SQL query result to a Pandas DataFrame in Python How to write a Pandas DataFrame to a .csv file in Python