Chemistry - What is an ambident substrate?

There is a subsection in March’s Advanced Organic Chemistry [1, pp. 450–451] that provides a straightforward definition and a couple of examples:

Some substrates (e.g., 1,3-dichlorobutane) can be attacked at two or more positions, and these may be called ambident substrates. In the example given, there happen to be two leaving groups in the molecule. Apart from dichlorobutane, and in general, there are two kinds of substrates that are inherently ambident (unless symmetrical). One of these, the allylic type, has already been discussed (Sec. 10.E). The other is the epoxy (or the similar aziridine524 or episulfide) substrate.525 Selectivity for one or the other position is usually called regioselectivity.

Substitution of the free epoxide, which generally occurs under basic or neutral conditions, usually involves an SN2 mechanism. Since primary substrates undergo SN2 attack more readily than secondary, unsymmetrical epoxides are attacked in neutral or basic solution at the less highly substituted carbon, and stereospeciﬁcally, with inversion at that carbon. Under acidic conditions, it is the protonated epoxide that undergoes the reaction. Under these conditions the mechanism can be either SN1 or SN2. In SN1 mechanisms, which favor tertiary carbons, attack may be expected be at the more highly substituted carbon, and this is indeed the case. However, even when protonated epoxides react by what is expected to be an SN2 mechanism, attack is usually at the more highly substituted position.526 This result probably indicates signiﬁcant carbocation character at the carbon (ion pairing, for example). Thus, it is often possible to change the direction of ring opening by changing the conditions from basic to acidic or vice versa. In the ring opening of 2,3-epoxy alcohols, the presence of $\ce{Ti(O\textit iPr)4}$ increases both the rate and the regioselectivity, favoring attack at C-3 rather than C-2.527 When an epoxide ring is fused to a cyclohexane ring, SN2 ring opening invariably gives diaxial rather than diequatorial ring opening.528

Cyclic sulfates (108), prepared from 1,2-diols, react in the same manner as epoxides, but usually more rapidly:529

I agreed with andselisk's answer. Yet, Ambident Substrates are not limited to March’s given examples in that answer. A substrate, which can be consecutively acted either as an electrophile of a nucleophile is also called ambident substrate (Ref.1). One of the best example is acetaldehyde or propanaldehyde in aldol condensation: 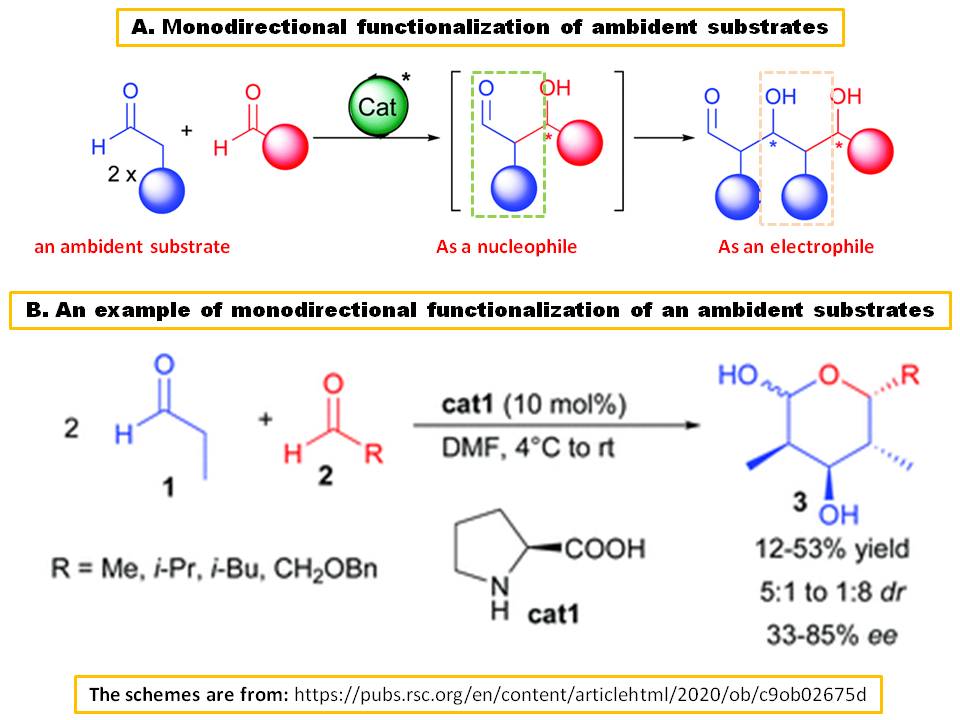 In 2002, Barbas III & coworkers have reported that L-proline ($\bf{\text{cat1}}$) could catalyze the twofold condensation of propionaldehyde ($\bf{1}$), acting consecutively as a pro-nucleophile and an electrophile, to other aliphatic aldehydes providing lactols, $\bf{3}$, in a moderate yield after intramolecular hemiacetalization (Scheme B)(Ref.2).

Chemistry - On heating in the Earth's atmosphere, can magnesium react with nitrogen to form magnesium nitride? Chemistry - Why is biphenyl not planar? Chemistry - Pressure exerted by a particle of ideal gas Chemistry - The meaning of permanent dipole moment Chemistry - Why do research papers mention experimental details in such detail? Chemistry - How can a thermometer ever show the actual temperature of an object if the object loses heat to the thermometer? Chemistry - Reaction mechanism of 2-amino-4,6-dimethylpyrimidine as a nucleophile Chemistry - Can geometrical isomers be enantiomers? Chemistry - Is the elimination reaction between 1 1 dibromo cyclopropane and phenyl lithium feasible in alkaline medium (and some heat) Chemistry - Can Ethanol be used to carry out SN1 reaction? Chemistry - What actually happens in strong acid- weak base reactions? Chemistry - What exactly makes a carbon atom "α" in a protein residue?
Pandas how to find column contains a certain value Recommended way to install multiple Python versions on Ubuntu 20.04 Build super fast web scraper with Python x100 than BeautifulSoup How to convert a SQL query result to a Pandas DataFrame in Python How to write a Pandas DataFrame to a .csv file in Python