Chemistry - Group theoretical condition for an integral to be zero

As you note, integrating an odd function (which has a certain symmetry, namely antisymmetry with respect to $\sigma_y$, the mirror "plane" of the y-axis) over all space is zero, while integrating an even function (which is symmetric with respect to $\sigma_y$) is generally not. Since integration is linear (that is, the integral of a sum is the sum of an integral), we can consider the integral of each irrep separately.

Then, it is clear that the only time the integral is nonzero is when, amongst the irreducible representations of the direct product (regardless of its dimensionality), the totally symmetric one is present, all other ones integrate out to zero.

If your question was instead how do you know that the functions with a given antisymmetry really do integrate to zero, let's consider what it means to have a certain symmetry. It means that there is a particular line or plane or point about which the value of the function is redundant. That is, if you specify it on one side, then the value is exactly determined on the other. We are integrating over all space, which means we can choose bounds of integration that utilize this symmetry. This then separates your integral into a non-symmetric piece and a piece using the symmetry. You first integrate over the non-symmetric piece and get something, and then you integrate that over the symmetry-including part. If that symmetry is antisymmetry, as will be the case with at least one symmetry of any irrep other than the totally symmetric one, this will cancel out the non-symmetric part with an equal and opposite non-symmetric part and the whole integral will be zero. Regardless of the dimensionality of the irrep being integrated it has at least one symmetry element over which it can be integrated that is antisymmetric. Hence, only integrals of functions that are totally symmetric are non-zero.

I can choose to integrate only over the nonsymmetric part and then use the symmetry for the rest of space. The presence of symmetry guarantees that I can do that. Remember, the irrep label is just telling you the symmetry properties of some complicated function. If $x$ in the above equation were some function $f$ that I knew nothing about except that is has this symmetry, I could still make this choice of bounds and use this property to get a 0 integral.

EDIT: To address orthocresol's question below: 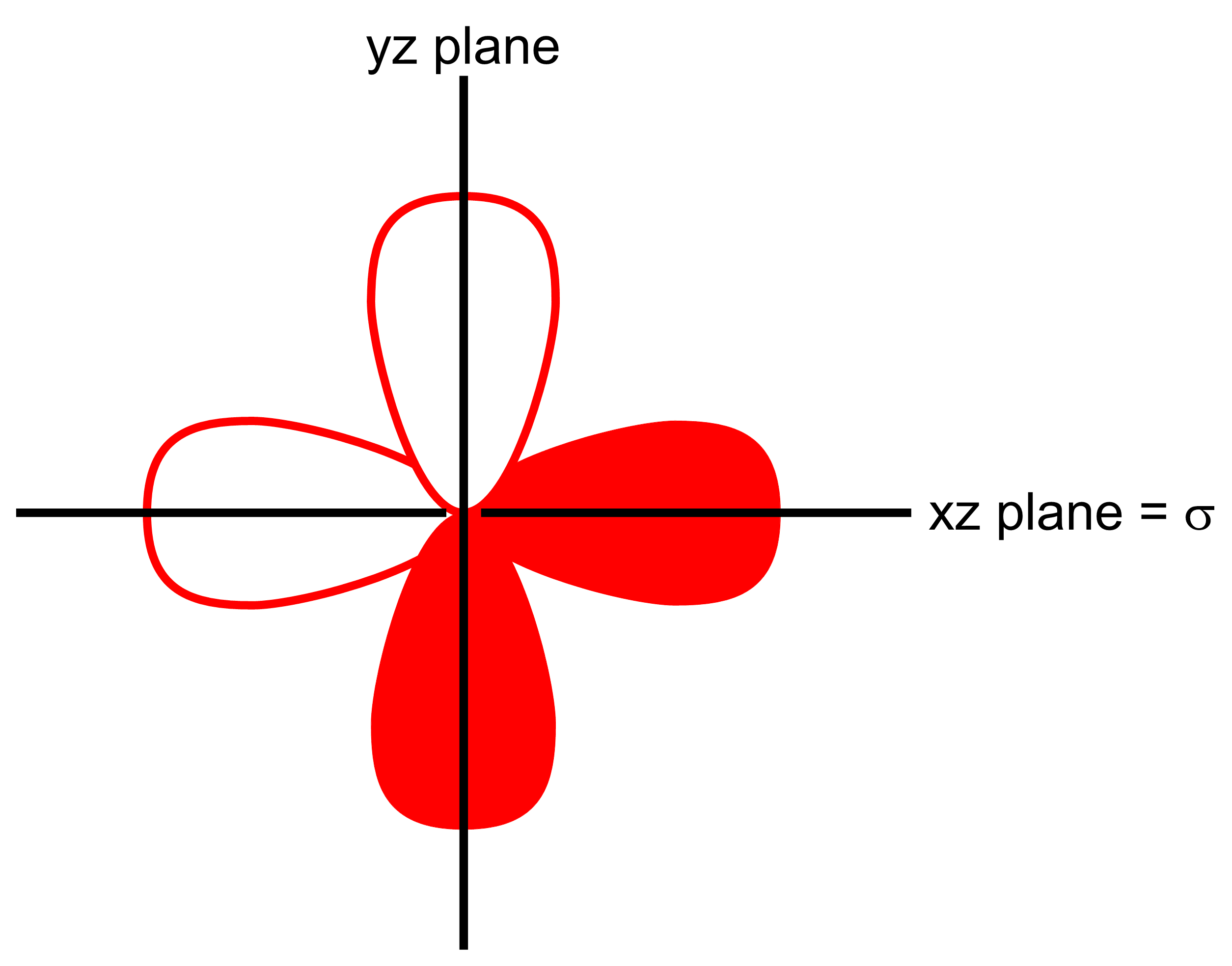 Now, why was it important to consider $p_x+p_y$ together? This is what allowed us to orient the orbitals with respect to the mirror plane. Consider a $p_x$ orbital alone rotated away from the axis given. It will have no defined symmetries with respect to the plane (reflecting across it will not map the orbital to itself or its negative) and there is no way to rotate it without the $p_y$. This is why they need to transform together in $C_{3v}$. Indeed, the reason why $E$ functions have 0 character under this symmetry is because the $p_x$ got sent to $p_x$ and the $p_y$ to $-p_y$ and so the whole ensemble was sent to $1-1=0$.

Now, hold on you say, can't I use similar arguments to imply that if I integrated a $p_z$ orbital (which is $A_1$ in $C_{3v}$) in all space, I will also get zero. The answer is yes. The $p_z$ orbital is not zero by symmetry in $C_{3v}$. I alluded to this above, the integral of a totally symmetric function in a given point group can still be zero. However, by describing the point group as $C_{3v}$, we are indicating that there is something special about the $z$-axis that breaks the symmetry and therefore precludes coming to this conclusion based on symmetry alone. Consider the deformation of planar $\ce{NH_3}$ to pyramidal $\ce{NH_3}$. In the former ($D_{3h}$), nothing distinguishes the positive $z$ from negative $z$ axis and a $p_z$ orbital is not totally symmetric ($A_2''$) and so we could conclude that it is zero by symmetry. As we pyramidalize to $C_{3v}$ though, the negative $z$ axis becomes different (it's got hydrogens there while the postive $z$ does not) and we can no longer conclude by symmetry that the integral of the $p_z$ orbital will be 0 (indeed, if it mixes even slightly with those hydrogens, it won't be). If it didn't mix though, it's integral would still be 0 (it's still just a $p_z$ orbital), we just couldn't tell that assuming $C_{3v}$ symmetry.

EDIT: Made this more rigorous. (I think. Feel free to critique).

First, let's decompose $\psi$ into components that correspond to how its representation reduces. That is, if

Suppose $\Gamma_{i}$ is not fully symmetric. There is some symmetry element $x$ whereby $x$ is antisymmetric in this representation. In other words, $$x\phi_{i} = -\phi_{i}$$

Now, consider this operation. You could perform the change of variable $x\tau \rightarrow \tau'$ for the integral.

This step is straightforward because we're basically arguing that if we convert our basis to something else (spcifically, transformed under $x$), the integral will be the same. This must be true since rotating the coordinate system, for example, does not change the value of the integral.

Now, we can substitute our definitions above:

The equality means that the integral must be zero.

Now, if the irreducible representation is the totally symmetric representation, then antisymmetric element $x$ does not exist, which invalidates the rationale above, though the other components of $\psi$ will integrate to zero.

I'm not sure I can rigorously prove this part, but I think I can sketch it out for a simple example.

However, you could also write this character table as:

I think this generalizes out to other 2-dimensional and higher dimensional irreducible representations in that you either have a matrix that inverts (for example character -2 in a 2-dimensional representation) or you are guaranteed that a linear combination of representations gives the inversion (like here). My background here is too weak at present to provide anything more concrete.

I consulted my coworker who has a Ph.D. in algebraic topology. The guidance I received was pretty helpful, so here's the new way I understand the problem. There are a few steps that I might not be able to answer questions about because I'm not a mathematician, but hopefully, you can read up on these if my explanation is not clear enough.

We need to show that $\int \phi_{i}$ vanishes if $\Gamma_{i}$ is not the fully symmetric irreducible representation.

We want to prove the following theorem: Suppose $\mathrm{Rep}(f)$ is irreducible and not trivial, then $\int f = 0$.

If the representation is irreducible, it means that $\mathrm{Rep}(f)\neq V\oplus W$, where $GV \subseteq V, GW \subseteq W$.

This is because when you construct the multiplication table for the group, each row or column has distinct elements (otherwise, elements in the group would turn out not to be distinct). There are two conditions under which this statement is true. One is the conclusion above that $w = 0$, and the other is that $gf = f, \forall g$. The second condition is false by the statement of the problem: if $f$ is fixed $\forall g\in G$, it implies that $G$ is the totally symmetric irreducible representation. Therefore, the only valid conclusion is that $$w = \sum_{g\in G}gf = 0$$.

We now sum the integrals over all elements of $G$:

This solution works for all point groups, doesn't require a definite basis, and works for arbitrary functions. Just the kind of answer you would expect from an abstract mathematician...