Chemistry - Why does the C–C bond have extremely weak absorptions?

For vibrational spectra the primary transition under investigation is the $v = 1 \leftarrow 0$ excitation (because $\hbar\omega >> k_\mathrm{B}T$, so excited states have negligible thermal population). The intensity of the transition depends on the transition dipole moment:

and plugging this in we get

where we took out the values of $\mu$ and $\mathrm d\mu/\mathrm d q$ evaluated at $q = 0$ because those are just ordinary numbers. The first term in the Taylor expansion vanishes because $|1\rangle$ and $|0\rangle$ are orthogonal (a key property of the harmonic oscillator, which is a good model for the low-lying vibrational states at the bottom of the well), and if we neglect the second- and higher-order terms, we have†

The RHS represents how much the dipole moment $\mu$ changes upon vibration of the bond (which is measured by $q$). As such:

Unfortunately most of what you've written is kind of off the mark.

† Of course, there's an additional point that must be made, which is that $\langle 1 | \hat{q} | 0 \rangle \neq 0$, but you'll have to take my word for it as I'm not keen on proving it here. It is most readily shown using ladder operators, and it should be covered in any QM text under the harmonic oscillator.

If we assume the simplyfied description, i.e. atoms being tethered together by springs, the spring constant allows describe where (energy wise, along the scale of wavenumbers, the abscissa in the specta plot) the absorption becomes observable. This however does not say a iota if the absorption band is strong, leading to a low remnant transmittance (the ordinate in the spectra plot).

From a practioner's perspective, C-C bonds often are referred as skeletal vibrations, because they represent vibrations of the backbone of the molecules characterized. As such, overall the span where to find these absorptions is rather wide ($\pu{1500 - 600 cm^{-1}}$), which contasts with an easy-to-spot absorption band like the one of $\ce{C#N}$ around $\pu{2260 cm^{-1}}$, regardless if you expand the spectral representation, or not. The better known example are the ones to attribute substitution patterns of arenes 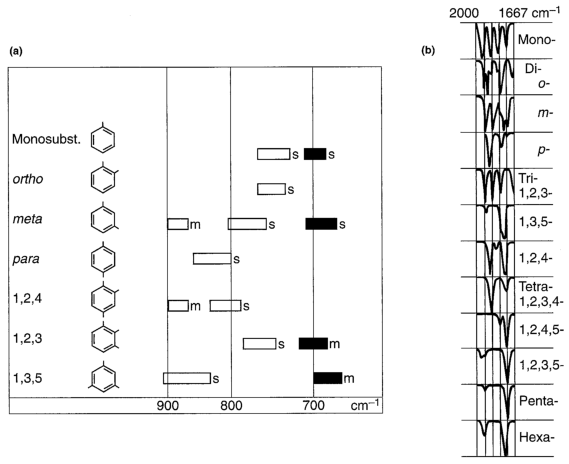 but as these hints are no longer taught as regularly as in the past, often need an expansion (who routinely looks at the bands at $\pu{900 cm^{-1}}$ and below as well?), and most importantly, since NMR spectroscopy provides this information more rapidly, the focus of attention while inspecting an IR spectrum often shifts to more prominent pattern.

Also in your analysis, you should consider Raman spectroscopy as a complementary method. Raman is also vibrational, however what show up weakly in the IR tends to show up in the Raman. In your example c-c bonds are very prominate in the Raman despite being weak in the IR. Because in the course of a vibration, IR spectroscopy is sensitive to the change of dipolar moments, and Raman spectroscopy is susceptible to the change of polarizabilities of the "electron cloud" involved.