Chemistry - What exactly is "B-strain"?

Both B- and F-strains are the terms I found were originally used to describe steric hindrance in complexes [1, pp. 66-67]:

The concept that steric hindrance in a monodentate ligand can affect the affinity of that ligand for a metal was first introduced by Brown and Bartholomay (1944) who suggested that co-ordination of a tertiary amine with bulky substituents would create strain within the amine. This strain, termed B-strain on account of it occurring behind the ligand atom with respect to the metal, would arise because although in the unco-ordinated amine any steric interaction between the bulky substituents could be relieved to some extent by an increase in the $\ce{C-N-C}$ angles.

Interestingly, further it is pointed out that at the same time there is no other solid evidences that B strain exists. Although modern organic chemistry textbooks are widely using this term for tertiary compounds.

Steric effects of another kind become important in highly branched substrates, and ionization can be facilitated by relief of steric crowding in going from the tetrahedral ground state to the TS for ionization. The relative hydrolysis rates in 80% aqueous acetone of $t$-butyl $p$-nitrobenzoate and 2,3,3-trimethyl-2-butyl $p$-nitrobenzoate are 1:4.4.

This effect has been called B-strain (back strain), and in this example only a modest rate enhancement is observed. As the size of the groups is increased, the effect on rate becomes larger. When all three of the groups in the above example are t-butyl, the solvolysis occurs 13,500 times faster than in t-butyl p-nitrobenzoate.

Not all steric effects decrease reaction rates. In the hydrolysis of $\ce{RCl}$ by an $\mathrm{S_N1}$ mechanism ..., the ﬁrst step, which is rate determining, involves ionization of the alkyl chloride to a carbocation:

The central carbon in the alkyl chloride is $\mathrm{sp^3}$ hybridized, with angles of $\sim 109.5^\circ$, but when it is converted to the carbocation, the hybridization becomes $\mathrm{sp^2}$ and the preferred angle is $120^\circ$. If the halide is tertiary and the three alkyl groups are large enough, they will be pushed together by the enforced tetrahedral angle, resulting in strain. This type of strain is called B strain (for back strain), and can be relieved by ionization to the carbocation.

For some tertiary substrates, the rate of $S_N1$ reactions is greatly increased by the relief of B strain in the formation of the carbocation. Except where B strain is involved, $\beta$ branching has little effect on the $S_N1$ mechanism, except that carbocations with $\beta$ branching undergo rearrangements readily.

There is also a Baeyer strain aka angle strain most noticeable for three-membered rings ($60^\circ$ is far from expected tetrahedral angles), which can also probably be abbreviated alike. [3, p. 193]

Hammond has proposed a steric "B-strain" (see H. C. Brown, J. Chem. Soc. (London) p. 1248 (1956)) argument to explain the greater stability of primary over secondary or tertiary carbanions. From the viewpoint of hybridization, structure A with $90^\circ$ geometry is preferred in carbanions. But this conformation brings the substituents too close together, and a compromise structure with larger bond angles results. Methide ion, $\ce{^-CH3}$, with the smallest substiuent groups, should be the most stable simple carbanion, since it can more nearly adopt the small angled conformation A preferred on electronic grounds. The more alkyl groups are added, the less able sterically are the anions to adopt the favorable conformations with smaller angles, and the less stable and more reactive the intermediates become. 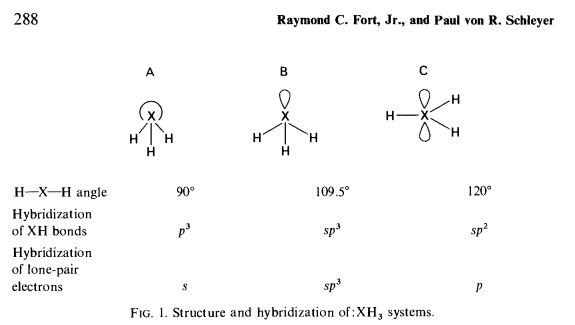 The boron trifluoride and boron trichloride complexes of diethyl ether are less stable than those of dimethyl ether, and the same order of stability is observed for the complexes of diethyl and dimethyl sulphides. As expected, the steric interaction is decreased as the distance between the metal and ligand atom is increased. Thus it is decreased when the metal atom is changed from boron to aluminium, and when the ligand atom is changed from oxygen to sulphur. It is largely eliminated, of course, if the substituents on the ligand atom are held back away from the metal, and thus very stable complexes are formed by the tertiary amine quinuclidine, while complexes of tetrahydrofuran and tetrahydropyran (and also the analogous sulphur heterocycles) are far more stable than those of their acyclic analogues.

Strain which arises as the result of this type of steric interaction has been termed F-strain by H. C. Brown -- who has carried out extensive investigations in this area -- on the grounds that the interactions responsible for the strain occurs mainly in front of the ligand atom with respect to the metal. For a critical but now rather dated review of H. C. Brown’s work, see Hammond (1956).

The term “B-strain” is proposed for this effect. (The letter B is used to indicate that the interference which causes the strain is localized at the “back” of the molecule-trimethylamine in the case under discussion-away from the entering group; it is thus contrasted to F-strain which results from interference at the “front” of the molecule, at the interface between the two components of the addition compound.)

Chemistry - Are carbocations necessarily sp2 hybridized and trigonal planar? Chemistry - Is there a cheap, safe liquid that evaporates EXOthermically around room temperature? Chemistry - Is it possible to find the ratio of isotopes only given the mean mass number? Chemistry - What is the IUPAC nomenclature for the cyclic mono-alkene ions formed after proton or hydride abstraction? Chemistry - Why is the electron-nucleus attraction modelled with only electrostatic interactions? Chemistry - If I drink water without sipping, is there a chance of saliva diffusing into my bottle? Chemistry - What is the reason for isotropy in amorphous solids? Chemistry - Gradient of integrals with Obara Saika recurrence scheme Chemistry - Transforming AO basis electron repulsion integrals into molecular spin orbital basis? Chemistry - Why does the C–C bond have extremely weak absorptions? Chemistry - Why do we need the identity operator, E Chemistry - What makes Gorilla Glass more durable with each generation?
Pandas how to find column contains a certain value Recommended way to install multiple Python versions on Ubuntu 20.04 Build super fast web scraper with Python x100 than BeautifulSoup How to convert a SQL query result to a Pandas DataFrame in Python How to write a Pandas DataFrame to a .csv file in Python