Chemistry - What is resonance, and are resonance structures real?

This answer is intended to clear up some misconceptions about resonance which have come up many times on this site.

Resonance is a part of valence bond theory which is used to describe delocalised electron systems in terms of contributing structures, each only involving 2-centre-2-electron bonds. It is a concept that is very often taught badly and misinterpreted by students. The usual explanation is that it is as if the molecule is flipping back and forth between different structures very rapidly and that what is observed is an average of these structures. This is wrong! (There are molecules that do this (e.g bullvalene), but the rapidly interconverting structures are not called resonance forms or resonance structures.)

Individual resonance structures do not exist on their own. They are not in some sort of rapid equilibrium. There is only a single structure for a molecule such as benzene, which can be described by resonance. The difference between an equilibrium situation and a resonance situation can be seen on a potential energy diagram. 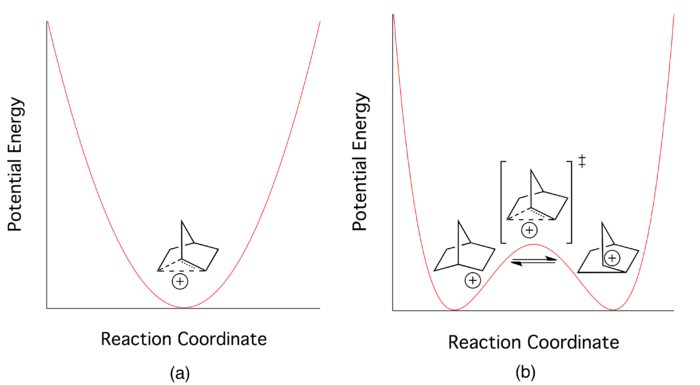 This diagram shows two possible structures of the 2-norbornyl cation. Structure (a) shows the single delocalised structure, described by resonance whereas structures (b) show the equilibrium option, with the delocalised structure (a) as a transition state. The key point is that resonance hybrids are a single potential energy minimum, whereas equilibrating structures are two energy minima separated by a barrier. In 2013 an X-ray diffraction structure was finally obtained and the correct structure was shown to be (a).

Resonance describes delocalised bonding in terms of contributing structures that give some of their character to the single overall structure. These structures do not have to be equally weighted in their contribution. For example, amides can be described by the following resonance structures:

The alternative to valence bond theory and the resonance description of molecules is molecular orbital theory. This explains delocalised bonding as electrons occupying molecular orbitals which extend over more than two atoms.

Bon has a very nice example of motion potentially restricted because of a barrier, and although it turns out that this is not the case for the norbornyl cation, there are simpler examples that do show inversion through a barrier, such as ammonia inversion or cyclopentene ring puckering. The two structures either side of the barrier would be not be called resonances any more that one would cis or trans isomers, where the barrier is substantial. The time to move back and forth across the barrier can be measured spectroscopically; in the case of $\ce{NH3}$ inversion this is only a few picoseconds.

The theoretical idea of resonance is only necessary to perform an accurate calculation in the valence bond method. In benzene, for example, the three double bonds can be drawn in different ways by rotating them around the ring. But there are other 'resonance' structures that could be added, for example a biradical structure such as the following:

and so on. The more of these we add the better the calculation should become. So the resonance is just a way of figuring out what structure to add into our calculation. We could end up with one electron on each carbon, or +/- charges here and there etc. All very high energy structures no doubt, but it may still be necessary for them to be included in a calculation although their contribution may be small. However, there is no suggestion of any conversion between them; they merely form a 'basis set' from which to perform the calculation.