Chemistry - Mechanism of a dephenylation reaction

First, the methoxy- group can be demethylated by $\ce{AlCl3}$, beginning with $\ce{AlCl3}$ coordination to the ether oxygen, followed by an $\mathrm{S_N2}$ reaction:

The oxygen activates naphthalene's position 1, and the acid chloride will undergo a Friedel-Crafts acylation (as you noted):

Being a strong Lewis acid, $\ce{AlCl3}$ can coordinate with the carbonyl oxygen. This activates position 4 of the $\alpha$-$\beta$ unsaturated carbonyl towards electrophilic addition:

Electrophilic addition occurs at naphthalene's spatially adjacent position 8, the carbocation stabilized through the extensive conjugation of the molecule (as well as by the oxygen, as you noted):

The spatially adjacent phenyl group accepts the proton and is ejected as benzene:

I came across ringo's detailed mechanism of orthocresol's query about dephenylation during a Friedel-Crafts (FC) acylation. The penultimate step in ringo's mechanism involves the dephenylation. My thought is why a sigma bond of a phenyl ring is abstracting a proton that should be lost readily on its own to effect aromatization? The following modification to this step of an otherwise cogent mechanism is offered. The FC reaction liberates the strong acid H+ AlCl4-. 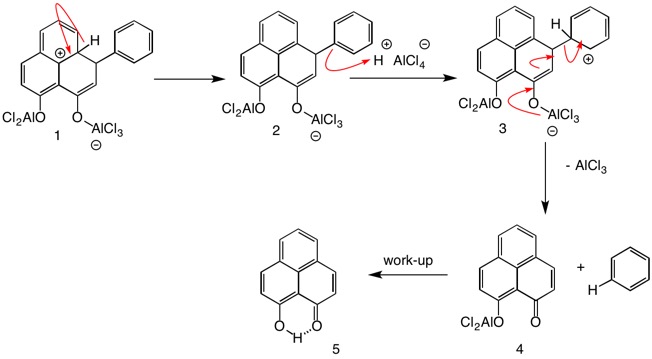