Yes, the room has a lot of air, but most of it isn't in direct contact with the vibrating string. In order for the string to make much sound, it needs to transfer some of its energy to the surrounding air, but there are a couple of issues which make that difficult.

Firstly, the string has a relatively small surface area, so it simply doesn't directly contact very much air.

Secondly, the string isn't very effective at transmitting its vibrations to the surrounding air. It's a bit like if you get a thin rod and wave it back and forth in water. Yes, it makes a few ripples, but the rod mostly just cuts through the water. But if you get a wide paddle and wave it around, then it's easy to make large waves in the water. Similarly, a vibrating string mostly just cuts through the air, rather than making useful pressure waves in it.

With air, it's even harder to effectively induce waves than in water, because it's so compressible. Obviously, pressure waves do travel through the air, but it's a lot harder to transmit such waves through a gas than through a denser, stiffer medium.

On a guitar, the soundboard is the front of the body. Here's a diagram, courtesy of Wikipedia: 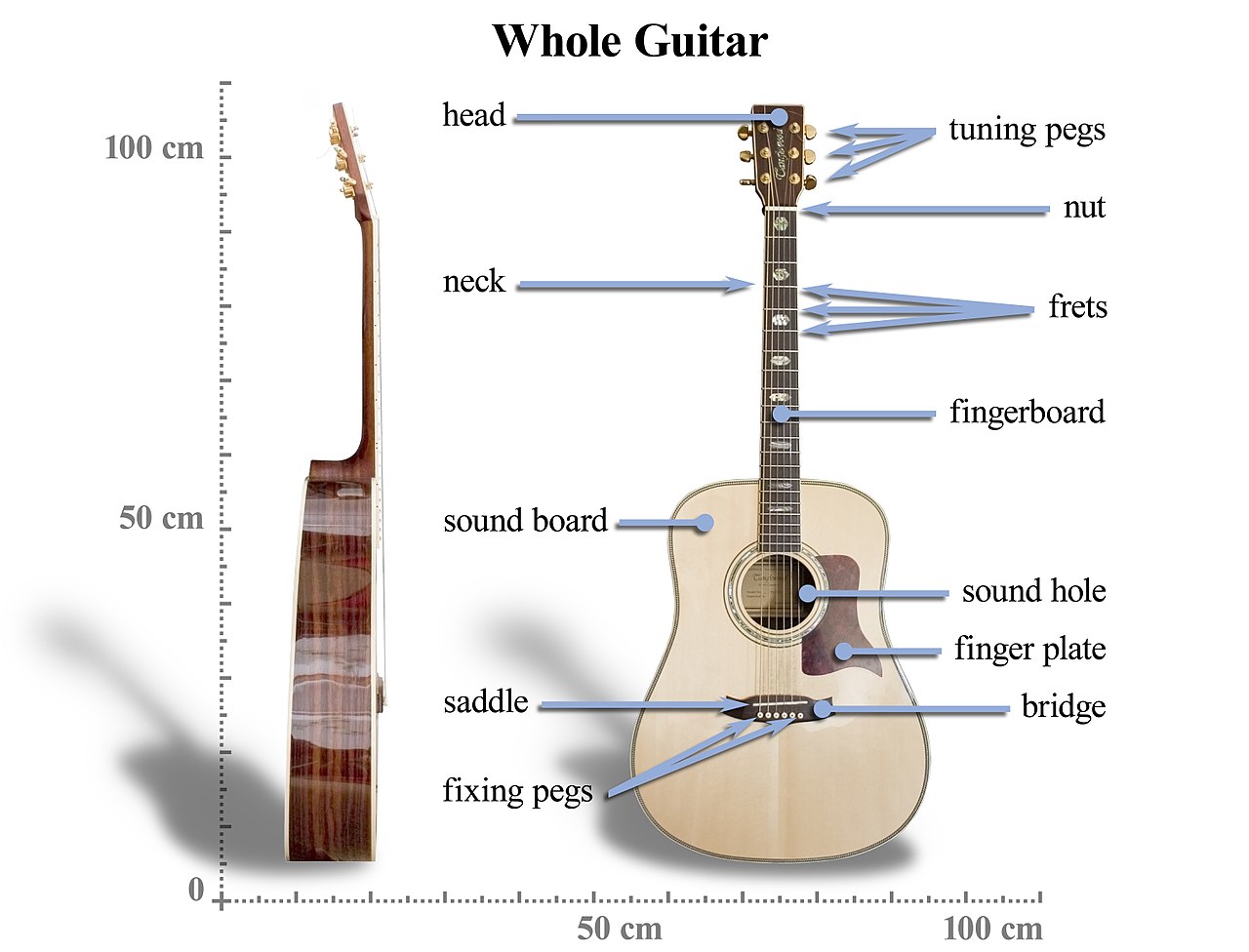 The soundboard of a piano is inside the body:

Unfortunately, that Wikipedia article is heavily technical and mathematical, without much physical detail.

The soundboard of a musical instrument, or the membrane of a loudspeaker, doesn't need to have a lot of back and forth movement. It just needs to vibrate relatively gently. Large movement wastes energy by causing bulk movement of the air, rather than inducing the desired pressure waves.

The string itself does not move the air much, does not produce much sound - hear an electric guitar without the amplifier!

In a violin it is the bridge that couples the movement of the string to the sound board which sets the air in motion.

The soundboard is the crucial component in acoustical amplification of string vibrations. The strings pass over the bridge, which is solidly attached to some part of the soundboard. A vibration at the bridge sets a good part of the soundboard in motion. This in turn vibrates the air close to the soundboard, and launches sound waves into the air, which we can hear. An important point here is that the "amplification" of the string vibration does not actually add any power that was not already present in the vibrating string. All we have done is transform the vibration from a small, stiff source (the string and bridge) to drive a large, soft destination (the soundboard then the air). This is a bit like using a lever to increase the effect of a force, without actually adding any power.

This soundboard effect is exploited in loudspeakers, where the soundboard is the large, lightweight cone, and the motive force comes from an electric current in a coil, in a magnetic field. The "motor" part of the loudspeaker, the coil in the magnetic field, would flap about ineffectually when driven by an electric signal, were the motor not attached to a relatively large cone, which actually drives the surrounding air.

Most string instruments have an enclosed sound box, the soundboard being one side of this box. This is partly practical in providing a stiff construction for attachment the strings to a neck, bridge, and soundboard. Bear in mind that the strings are under considerable tension, which would pull apart a weak construction.

Now we come to the matter of resonance. There is some unfortunate conflict between common usage, and physics or engineering terminology. Informally, an object is "resonant" if it readily makes a sound when set in motion. A thin board of wood or a metal saucepan are resonant in this sense, whereas a bucket of sand or a woolly jumper are not resonant, in the informal sense. But to an engineer, a resonance means a tendency for a system to respond more strongly to vibrations in some narrow range of frequencies, around the resonant frequency. Organ pipes and stretched strings are resonant in this stricter sense. Real acoustic/mechanical systems tend to have many resonant frequencies.

The problem with resonances in string instruments is that we want the soundboard to be readily set in motion to make a sound (informal resonance), but we want this to happen more or less equally for all frequencies that the strings can produce. The latter requirement means that we want to avoid prominent resonant frequencies, that would amplify some notes at the expense of others. In the end, we end up with a system that does have specific resonances, but they are artistically controlled to "sound right", and make the instrument respond to the player. If we try to control unwanted resonances too much, this detracts from the desirable responsiveness of the soundboard amplification.

As a final note on resonances, there is the matter of soundholes. Specific low frequency resonances of the soundboard and the air in the box can be exploited to boost the lower frequency amplification. This gives an instrument a fuller and deeper sound. In loudspeaker technology, this effect is used to produce a bass-reflex cabinet, which has an improved bass response compared to a plain closed box.

Not all string instruments have a sound box to improve the bass sound. The piano has a very large soundboard, which helps to prevent cancellation of bass frequencies. The banjo uses a drum skin as a soundboard, with thin shell rather than an enclosing box. The banjo sound is notably lacking in bass.

At what temperature are the most elements of the periodic table liquid? How do you make more precise instruments while only using less precise instruments? Why do fans spin backwards slightly after they (should) stop? Why does the bullet have greater KE than the rifle? What happens to the mass of a burned object? Does time stop in black holes? Stood in front of microwave with the door open Why is current in a circuit constant if there is a constant electric field? Why do objects not fall faster if you wait? What is meant when we say that a differential takes on a certain value? What are the necessary and sufficient conditions for a wavefunction to be physically possible? Newton's Law of Cooling: $\delta Q$ or $\mathrm{d}Q$?
Pandas how to find column contains a certain value Recommended way to install multiple Python versions on Ubuntu 20.04 Build super fast web scraper with Python x100 than BeautifulSoup How to convert a SQL query result to a Pandas DataFrame in Python How to write a Pandas DataFrame to a .csv file in Python