At what temperature are the most elements of the periodic table liquid?

We take the natural elements (atomic numbers $1$ to $92$) to have well-defined melting and boiling points. Additionally, all figures are quoted at the standard $1\text{ atm}$ pressure. Here's some quick Python code that fetches the number of elements in the liquid state at various temperatures (note that it relies on the values of the melting and boiling points of elements defined in the mendeleev package, however it is straightforward to instead use your own dataset).

which broadly fall under transition metals, lathanides and actinides. As noted by ChrisH, there is an additional such temperature range starting at $2584\text{ K}$, in which the liquid elements are:

I also thought it might be interesting to plot the total number of elements in the liquid state at a given temperature as a function of temperature: 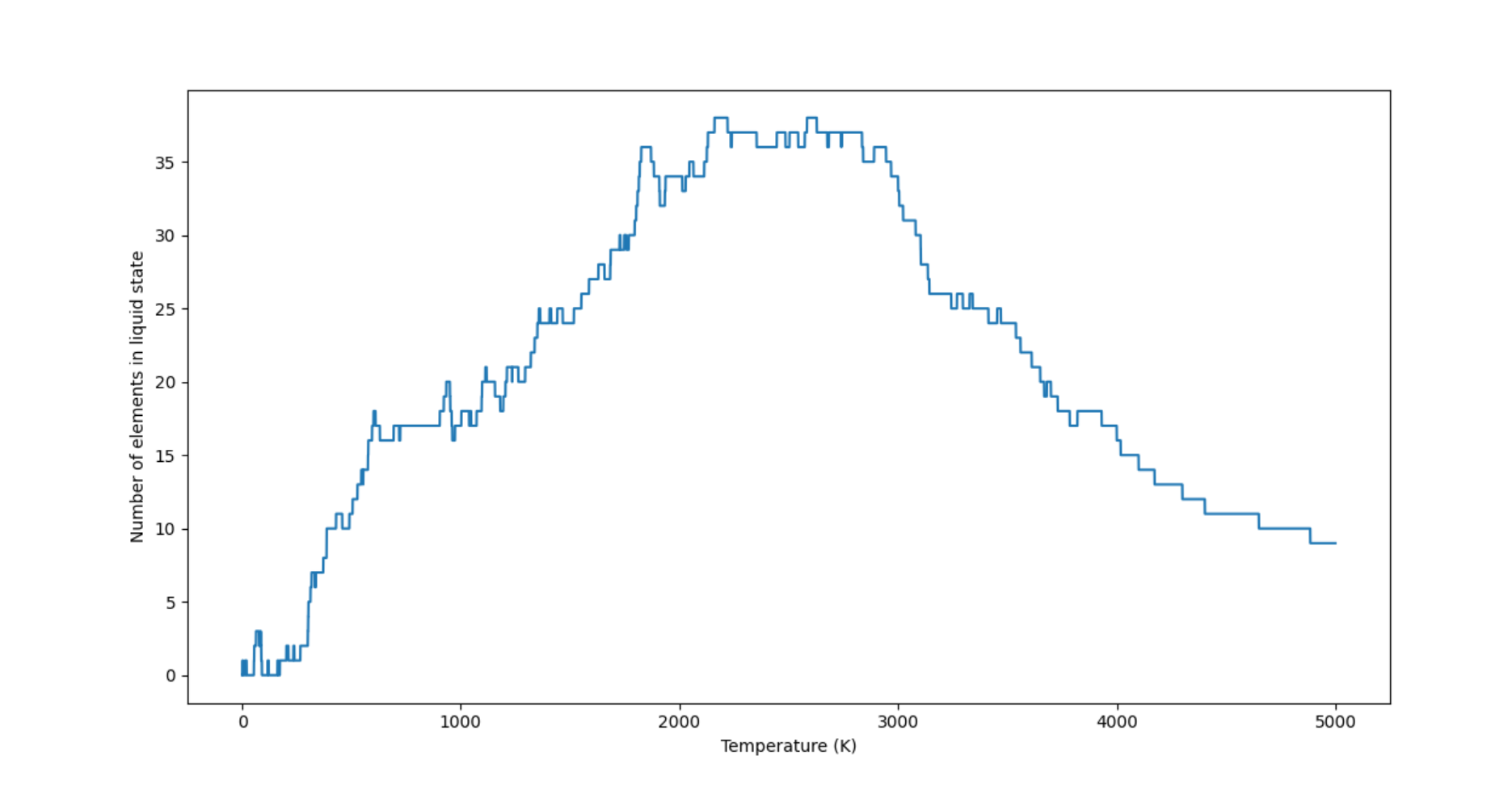 I thought another visualization of the data set might be interesting. Here's the liquid range for each element up to and including uranium, sorted vertically from lowest to highest boiling point. (For consistency with the other answer, I also used mendeleev as the data source.) The colored vertical stripes mark the maxima found by Nihar Karve and Chris H (see the other answer). 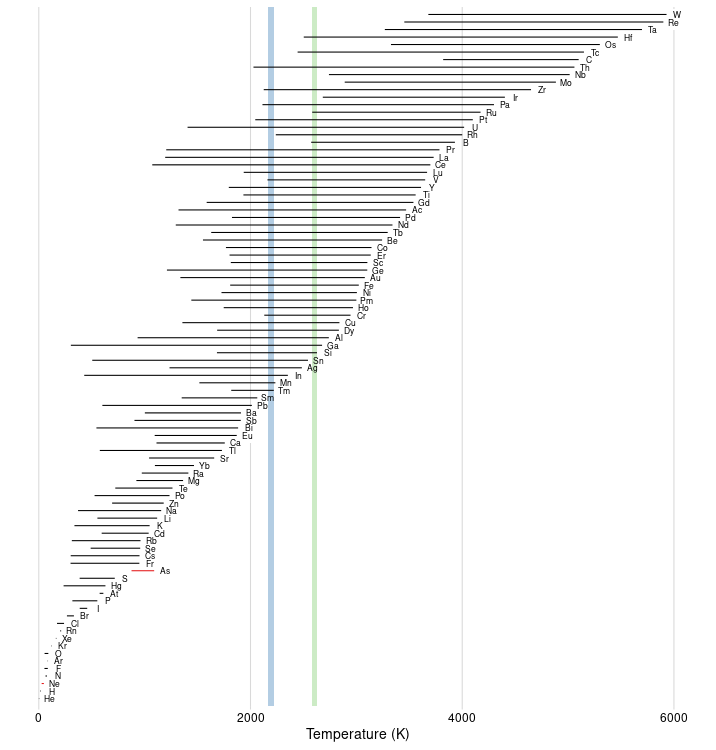 This shows that the positions of the maxima are controlled by a few elements that have unusually high melting points for their boiling point: chromium and vanadium for the lower maximum, boron and ruthenium for the upper maximum.

Footnote: In mendeleev's data set, two elements have a melting point greater than their boiling point:

I have marked these anomalies by drawing the "liquid range" line for these elements in red instead of black.

For arsenic, the anomaly is because, at 1 atm, arsenic sublimes at $876\ \mathrm{K}$. According to

the lowest pressure at which arsenic can be liquid is $35.8 \pm 0.5\ \mathrm{atm}$ and its melting point is $1090\ \mathrm{K}$ at that pressure. The authors of mendeleev seem to have chosen to record both numbers. I presume the situation is similar for neon.

How do you make more precise instruments while only using less precise instruments? Why do fans spin backwards slightly after they (should) stop? Why does the bullet have greater KE than the rifle? What happens to the mass of a burned object? Does time stop in black holes? Stood in front of microwave with the door open Why is current in a circuit constant if there is a constant electric field? Why do objects not fall faster if you wait? What is meant when we say that a differential takes on a certain value? What are the necessary and sufficient conditions for a wavefunction to be physically possible? Newton's Law of Cooling: $\delta Q$ or $\mathrm{d}Q$? How can a rigid body's weight do work on it to make it rotate?
Pandas how to find column contains a certain value Recommended way to install multiple Python versions on Ubuntu 20.04 Build super fast web scraper with Python x100 than BeautifulSoup How to convert a SQL query result to a Pandas DataFrame in Python How to write a Pandas DataFrame to a .csv file in Python