Android - Possible to transfer songs from iTunes (on Mac) to Android phone?

Of course, it's trivial to transfer the non-DRM music. There are lots of apps on Google Play that effectively sync iTunes with Android in an iTunes-iOS way. Personally, I really like iSyncr used together with Rocket Player. It can also be done manually via Android File Transfer. The problem, however, comes with the DRM music.

I've been in exactly the same situation as you. I made the move from iOS to Android, and had a bunch of old iTunes DRM music in my iTunes library that I wanted to sync to my Android devices.

I've tried this personally, and I can confirm that at the time of writing (October 2016) there is absolutely no way to do it. iTunes DRM music will only play on Apple software. The Apple Music Android app might stream your uploaded music, but only if you're a paid subscriber. Apple Music doesn't let you do anything unless you get a paid plan. That's the first thing the app asks you to do when you open it, and there's really no other functionality to the app unless you do that. And even if you were a paid subscriber, I'm not sure what sort of offline or internal storage functionality the app would give you. It's really a streaming app.

Please note: These methods all have annoying flaws about them. I'm sorry, but I'm really not aware of any better ways. I have searched quite thoroughly.

Option1 : Burn to a virtual CD and reimport

This is probably the easiest and most reliable way to do it. (Unless you have dozens of albums, in which case, yes, it's a lot of manual work.) Emulate a burnable CD. Use iTunes to burn the songs do the virtual disk. The software will burn it very fast since it's virtual. It will instantly be mounted as a virtual CD on your macOS. You can then import the songs to iTunes again, DRM-free. This is also very fast. I used Apple Lossless format while reimporting, because I have OCD about not losing quality. I have tried this on Yosemite and it 100% works. Here's an alternative for Windows users (haven't tried it myself, though.) If, somehow, emulation doesn't work for you, then I guess you could use a rewriteable actual physical CD. That would be much slower, though.

Option 2: Delete and redownload from iTunes (may not always work.)

According to Apple, you can delete the DRM songs from your iTunes library and download them again from the iTunes store. This is supposed to give you non-DRM copies of the songs. However, I've found that this doesn't always work. I just tried it with one song that I bought 10 years ago, and the downloaded file was DRM. Also, it was 128 kbps even though I would have gotten twice that bitrate had I purchased the same song today. Thanks, Apple! Also, if trying this, make sure you have a backup of your songs before deleting them. Previously purchased items are not always available for redownload.

According to some of the answers to this question on Ask Different, you can pay Apple for some services to remove the DRM. I'm not sure if this works anymore, though. Also it just feels bad to have to pay again for music you've already bought and paid for.

There's another way that will (unfortunatley) cost you money too. 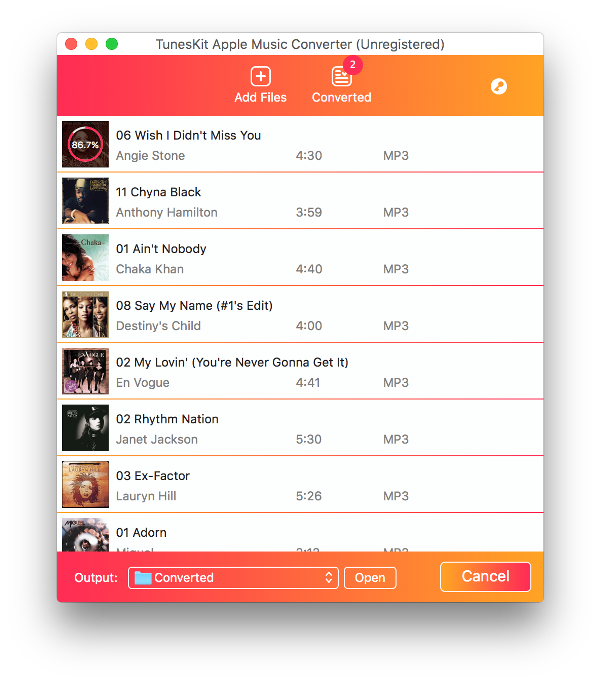 The app is called TunesKit, and can be purchased from here. I've tried the free trial version, and it worked fine. Unfortunately, the limitations with the free trial mean that you'll need the paid version for it to be of any real use.

In the past, there were free apps to do what that app does. I haven't been able to get any of those apps to work as of today. I haven't found any currently working free apps that remove iTunes DRM. If anyone knows of any, then please let me know.

One final option is to simply redownload your music from a non-DRM source and delete the old DRM music. For example, I had some music from General Fuzz, an artist who licenses his music under the Creative Commons license. I had already paid for his music through iTunes (as a way to support him), so I merely used BitTorrent to download his music again, legally. Of course, it's likely that the vast majority of your music is not licensed under such a license. However, you have already paid for the music. If your personal morals, the laws in your jurisdiction and your computer knowledge allows you to do this safely, then you may consider simply redownloading the music through BitTorrent. I personally wouldn't have any ethical objections to downloading music I'd already paid for in this fashion, but do consider the laws of your juridsiction.

Android - How to access and modify previous commands (bash history) in Termux Android - How can I check storage I have used on Google photos Android - How do some android apps remember that this is not the first time they are being installed? Android - Why does OK Google voice search unlock Moto G4 Plus? Android - Ideal charging / discharging percentage for maximum battery life? Android - How many tabs are open in chrome browser? (Above 100) Android - If I buy an Android phone today and want security updates for as long as possible, how should I choose a phone? I'm willing to use custom ROMs.​ Android - 2 GB RAM or 3 GB RAM, does it really matter? Android - Is it possible to mount on a PC an SD card that has been encrypted by an Android Marshmallow device? Android - Accessing termux user environment from other consoles Android - Recovering data from corrupted SD card formatted as internal storage (Marshmallow) Android - Why, and how to increase 16-character lockscreen password limit?
Pandas how to find column contains a certain value Recommended way to install multiple Python versions on Ubuntu 20.04 Build super fast web scraper with Python x100 than BeautifulSoup How to convert a SQL query result to a Pandas DataFrame in Python How to write a Pandas DataFrame to a .csv file in Python