Chemistry - Is it correct to look at plane of symmetry in substituted cyclohexane for determining a meso compound?

A plane of symmetry in a 2-D projection of a cyclohexane is a sufficient condition. Alternatively, and lengthy, you conduct an analysis involving conformers but not limited to the flipping of the ring, that means you must let the chloromethyl rotate, in your example.

The answer to your title question is YES providing that the molecule isn't blocked in one conformer.

The latter situation requires low T, or the presence of more than one bulky substituent. At room temperature and within the context of common practice and exercises we can be sure that the condition is met. I suspect that cases in which the situation can rapidly escalates towards complexity exist, as for heavy substitutions alters the conformational distribution, too.

The second question is basically "How is that/why a plane of symmetry in a 2-D projection of conformers which themselves have no symmetry but are enantiomers does effectively work as a criterion?".

Well, a laconic but solid answer is that there is no other possible outcome.

There must be a formal mathematical way to express this fact; I am thinking of symmetry and projection operations.

Yet, I can't do better than visualise the situation, but this is again following the reasoning and depicting the sketch within the answer you have linked, although mentally.

It is the flipping between enantiomeric conformers that makes the two simultaneously equalise each other, and this necessarily requires the two stereocentres having opposite absolute configuration and being at opposite sides of a symmetry plane of the molecule's projection, otherwise they would forcedly be different isomers and there won't even be this discussion.

You can also think of the structure as having the axial and equatorial substituents in an averaged intermediate position, as for the two limits can't be resolved. Indeed, a 2-D projection is in a way a real representation of the molecule - not brutal alteration is operated. It just says what it's supposed to tell, i.e. how one would see the molecule as watched from above the projection plane. During the flipping, one would see a rapid on-plane oscillation of the ax and eq substituents in an alternate fashion, and this require a plane of symmetry in order for the two to compensate their effects. To make this visualisation clearer, I've sketched a rudimental figure showing the motion of ax / eq substituents and their average position as × 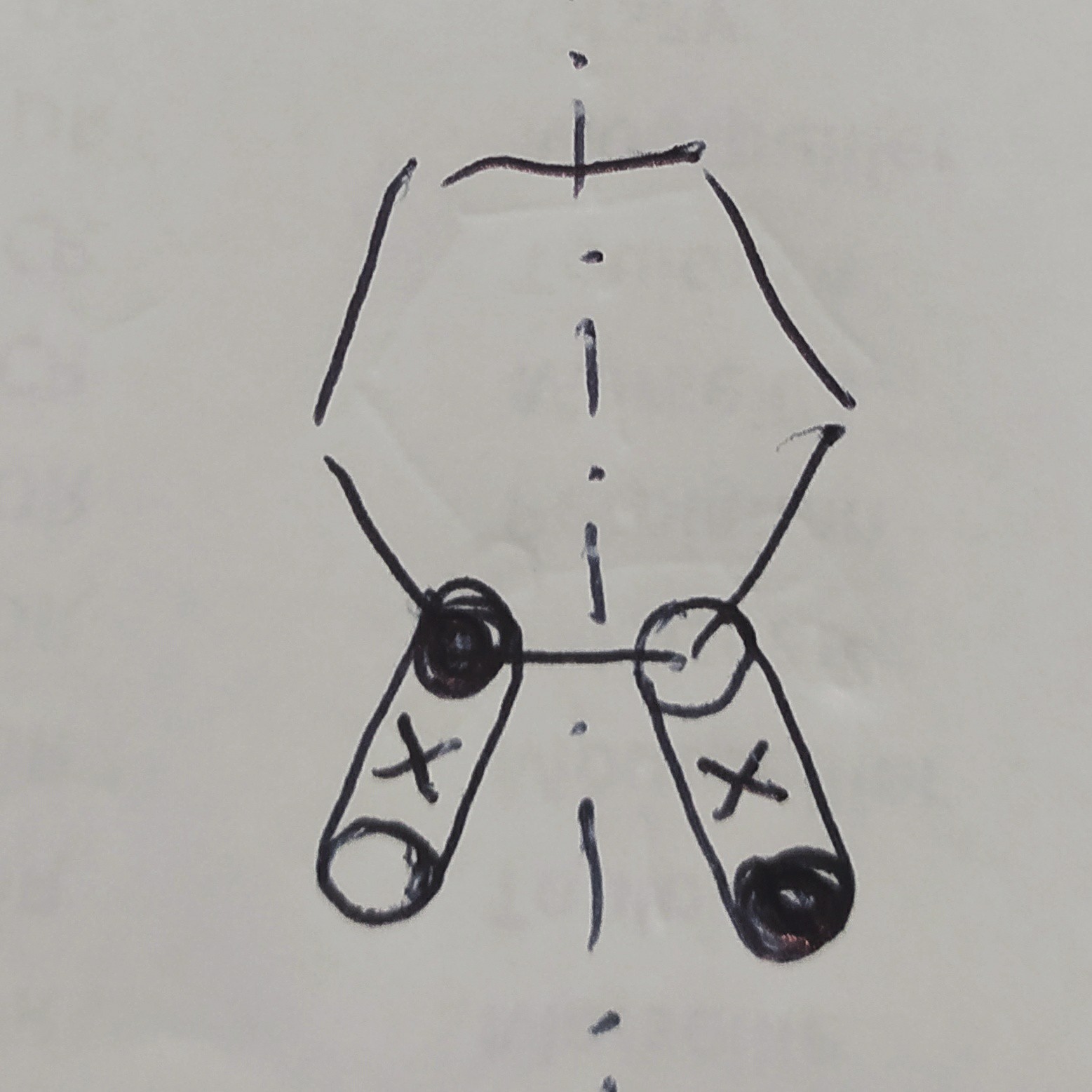 Considering that the motion of the substituent can be taken as a handle for the entire conformational flipping, one can see the relevance of a symmetry plane of the projection. In such a picture there is no reason to expect optical activity, as if the molecule would be flat.

Chemistry - How to assign overlapping multiplets in 1H NMR spectra? Chemistry - Why is the sum of two inexact differentials exact? Chemistry - In electrolysis, why does each atom wait to turn into gas until they reach a particular electrode? Chemistry - How are there two C3 rotation axes in ammonia? Chemistry - What does heterogeneous mean? Chemistry - charge density as a measure of lattice enthalpy & polarizing power? Chemistry - Why "monoxide" but not "diodine"? Chemistry - Using a H NMR spectrum to determine the structure of a protein supplement Chemistry - Chirality and Optical activity Chemistry - Criterion for gravimetric analysis of silver Chemistry - Work done in expanding a gas reversibly and irreversibly Chemistry - Is it better to use a smaller, more accurate measuring cylinder several times or a larger, less accurate one for the same volume?
Pandas how to find column contains a certain value Recommended way to install multiple Python versions on Ubuntu 20.04 Build super fast web scraper with Python x100 than BeautifulSoup How to convert a SQL query result to a Pandas DataFrame in Python How to write a Pandas DataFrame to a .csv file in Python