Chemistry - Why "monoxide" but not "diodine"?

Both "monooxide" and "monoxide" are used in the literature, yet "monoxide" is being used more often (Google Books Ngram Viewer). Although this is an accepted elision, it is not the preferred one, and must not set a precedent for other cases when multiplicative prefix ends with the same vowel as the root word begins with, such as "diiodine".

According to the current version of Nomenclature of Inorganic Chemistry, IUPAC Recommendations 2005 [1, p. 31]:

In general, in compositional and additive nomenclature no elisions are made when using multiplicative preﬁxes.

However, monoxide, rather than monooxide, is an allowed exception through general use.

The multiplicative preﬁxes precede the names they multiply, and are joined directly to them without spaces or hyphens. The ﬁnal vowels of multiplicative prefixes should not be elided (although ‘monoxide’, rather than ‘monooxide’, is an allowed exception because of general usage).

Although it seems like a question of English language phonetics, monoxide is not an exception but a general trend.

Dioxide (no "a" vowel in the prefix)

Trioxide (no "a" vowel in the prefix)

The accepted spelling of diiodide is di-iodide in the grand Oxford Dictionary. It is also consistent with the other halides

Nothing seems unusual about it.

As to the English language, someone wrote why b-u-t is pronounced differently from p-u-t? Some times we have to accept things as they are.

"Monooxide" was previously used to describe compound with single oxygen before being replaced with "Monoxide". Instance of "Monooxide" can be found in papers from 20th century which later became obsolete. Here is an example: 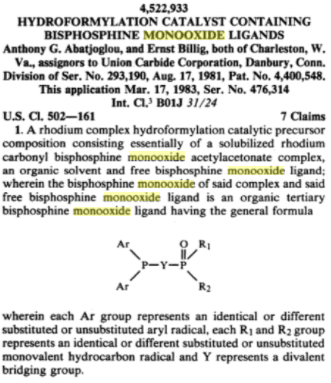 OED says for mono-: "before a vowel or h usually mon-." There's no such notation for di- (probably because a prefix that short can't afford to be reduced by 50%!). So there isn't a general rule in English or in chemistry that demands that identical vowels coalesce, but there is one that says that "mono-" is liable to drop its final "o" before any vowel, as in monarch, monaural, or monocle. This doesn't always happen (and it appears to be less common in modern scientific contexts), but it's still a regular feature.

Chemistry - Using a H NMR spectrum to determine the structure of a protein supplement Chemistry - Chirality and Optical activity Chemistry - Criterion for gravimetric analysis of silver Chemistry - Work done in expanding a gas reversibly and irreversibly Chemistry - Is it better to use a smaller, more accurate measuring cylinder several times or a larger, less accurate one for the same volume? Chemistry - How can a nonlinear field gradient be generated in NMR? Chemistry - Is the average kinetic energy of evaporating water molecules (at room temperature) equivalent to the average kinetic energy of boiling water? Chemistry - Linking an electrochemical cell to an electrolytic cell Chemistry - Cleaning with vinegar and sodium bicarbonate Chemistry - Half sigma bonds Chemistry - What is the difference in mosM and mOsm units, if there is any at all? Chemistry - Any idea why tap water goes stale overnight?
Pandas how to find column contains a certain value Recommended way to install multiple Python versions on Ubuntu 20.04 Build super fast web scraper with Python x100 than BeautifulSoup How to convert a SQL query result to a Pandas DataFrame in Python How to write a Pandas DataFrame to a .csv file in Python