Chemistry - How to rationalise the resonance structures and hybridisation of the nitrogen in a conjugated amine?

First of all, are they correct? ChemBioDraw had some complaints, but as far as I can see there's the same amount of electrons, and no valence orbitals exceeding capacity.

Yes, these are the six most important resonance structures for this compound. The reason ChemDraw complains is that it is trying to act smarter than you, and it most certainly is not. It interprets that negative formal charge on the carbon atom as implying a lone pair, since carbon can only have the negative charge if it also has a lone pair. When you add the lone pair and the charge, ChemDraw is suddenly stupid and thinks you have exceeded the octet on carbon (3 bonds + 1 explicit LP + 1 implied LP from the charge).

In molecular orbital theory, we do away with the need for both resonance and hybridization. This molecule would have 7 $\pi$ orbitals formed from linear combinations of the p orbitals on the 6 participating carbon atoms and the nitrogen atom. The probability density function plots of these 7 orbitals will be more complex than you might be used to, but they will suggest the same electron density and charge density as a resonance hybrid assembled from your six resonance structures. See the Wikipedia article on conjugated systems, which is not very good but will give you the idea.

My reasoning is that the first structure contributes more.

The five charge-separated resonance structures are more important than you think, since they imply that the five-membered ring is aromatic like the surprisingly stable cyclopentadienyl carbanion. However, you might not yet be this far along in your studies of organic chemistry. At the introductory level of understanding of resonance in organic molecules, the first structure is most important for the reasons you list.

I wanted to add a perspective to this since this can be a contentious issue, and I would still say knowing whether a nitrogen is $sp^2$ or $sp^3$ hybridized is not straightforward. I was originally hoping to add this under this question specifically about aniline, but that question is now closed and marked as duplicate, with a link to this question.

In a simple molecule like aniline, one might think that the hydrogens of the amine would be planar with the ring. However, we know from crystal structures of aniline that it is indeed pyramidal. If you have access to the Cambridge Structural Database (CSD), you can see this in structure BAZGOY. The improper dihedral angle of the hydrogens is ~26 degrees in that structure. 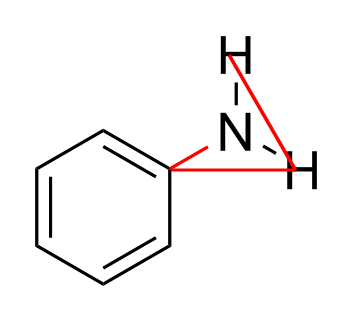 I used the MP2 method and cc-pVTZ(-F) basis set, in implicit solvent (PBF) using the Jaguar software from Schrodinger. You can see in this plot and gif that the lowest energy angle was at ~35 degrees. That's pretty much completely pyramidal (in ethane, an equivalent angle is 33.4). 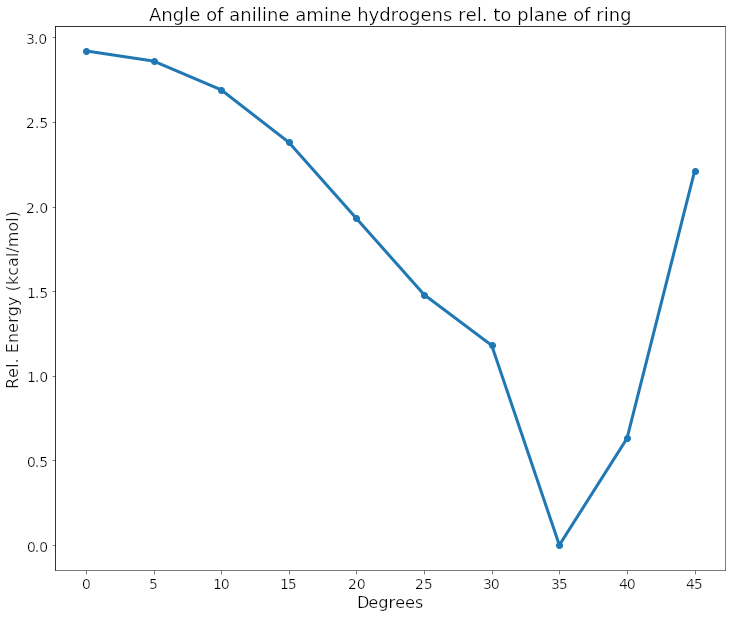 However, that being said, I also wouldn't say this is dogmatic. This is an implicit solvent calculation, and in real water with real hydrogens and oxygens to hydrogen bond to, things may be still different. NMR might be able to help figure this out, or it could further confuse if the timescale of flipping smears the signal to give a flat angle when it is not.

I should also point out that there are other crystal structures that contradict this. If you look at the crystal structure VOMFOS, which is of an adenosine analog, the amine hydrogens are planar with the ring. Is that just an artifact of the crystallization packing network, or a true representation of the hybridization of that nitrogen? Hard to say.

I think my main point here is to be careful what you assume. If you asked me on a test in undergrad whether the amine on aniline is $sp^2$ or $sp^3$, I would have said $sp^2$ with confidence. Experimental and computational evidence suggests that might not be the case.

Chemistry - What is the reaction between oxalic acid and potassium permanganate? Chemistry - Regioselectivity of acid-catalyzed ring-opening of epoxides Chemistry - Easily removable material that sticks to skin Chemistry - Is there a point at which Ethanol (E10) fuel becomes harmful to gas tanks or engines if not used? Chemistry - Significant Figures Interpretation Chemistry - Why are these molecular orbitals invalid for hexatriene? Chemistry - Is there any substance that's a 4-4-4 on the NFPA diamond? Chemistry - Why are all the phenyl protons in benzyl alcohol equivalent in the ¹H-NMR spectrum? Chemistry - Saturated vs unsaturated fats - Structure in relation to room temperature state? Chemistry - Carbon with 5 bonds? Chemistry - Dissolving Organic Tissues Chemistry - How do you create primary amines from alcohols?
Pandas how to find column contains a certain value Recommended way to install multiple Python versions on Ubuntu 20.04 Build super fast web scraper with Python x100 than BeautifulSoup How to convert a SQL query result to a Pandas DataFrame in Python How to write a Pandas DataFrame to a .csv file in Python