Chemistry - How many hydrogen bonds in these compounds?

However hydrogen bonds also require an "active" lone pair capable of accepting a hydrogen-bond, where $\ce{H2O}$ can do 2 of these again, but $\ce{NH3}$ can only accept 1.

So, does water make 4 bonds or 2? Does ammonia make 1 bond or 2? The answer is both, but it depends on how you count it. If you look at an individual molecule in a cluster of water molecules it may appear to be surrounded and held in place by four H-bonds; it makes two with the hydrogen and accepts two with the lone pairs. That molecule is involved in 4 hydrogen bonds.

But if you take 100 water molecules and count how many hydrogen bonds there are between them, the answer will be about 200 because each molecules makes 2 bonds. If you consider each molecule making 4 bonds then you are double counting each bond being made and accepted. The same is true for ammonia, each molecule makes one hydrogen-bond, it also accepts one. You could say that an individual molecule is involved in two bonds, but if you count them all up each molecule only makes one each.

This a good question for discussion to clear concept on H-bonding in alcohol.

Hydrogen bonding occurs between molecules where you have a hydrogen atom attached to one of the very electronegative elements - fluorine, oxygen or nitrogen.

In the case of alcohols, there are hydrogen bonds set up between the slightly positive hydrogen atoms and lone pairs on oxygens in other molecules.

The hydrogen atoms are slightly positive because the bonding electrons are pulled away from them towards the very electronegative oxygen atoms. 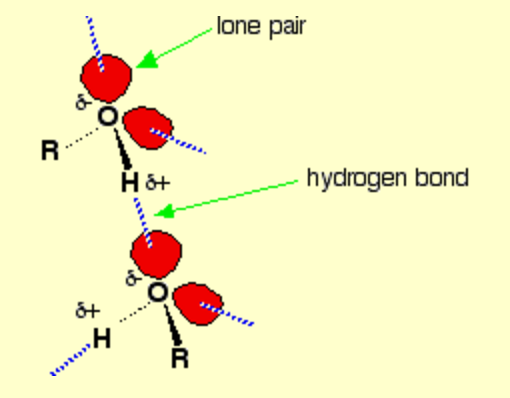 Note: If you want to be fussy, the diagram is slightly misleading in that it suggests that all of the lone pairs on the oxygen atoms are forming hydrogen bonds. In an alcohol that can't happen. Taking the alcohol as a whole, there are only half as many slightly positive hydrogen atoms as there are lone pairs. At any one time, half of the lone pairs in the total liquid alcohol won't have hydrogen bonds from them because there aren't enough slightly positive hydrogens to go around. In the diagram, to show the 3-dimensional arrangement, the wedge-shaped lines show bonds coming out of the screen or paper towards you. The dotted bonds (other than the hydrogen bonds) show bonds going back into the screen or paper away from you.