Chemistry - Why does the carbonyl group in an acid anhydride have two stretching frequencies?

The two observed C=O frequencies are due to the symmetric and asymmetric stretching modes of the anhydride.

This explains why you get two frequencies for C=O bond in acid anhydrides, whilst ketones/aldehydes etc. only give a single IR frequency for the C=O bond.

Just to add on to NotEvans's answer:

The stretching frequencies of compounds can theoretically be predicted by group theory and symmetry considerations - some introduction can be found here. In general, for "simple" molecules such as $\ce{CO2}$ ($D_{\infty\mathrm{h}}$) and $\ce{XeF4}$ ($D_{4\mathrm{h}}$), the bonds do not stretch individually, but rather their vibrations are coupled. A diagram of the stretching vibrations for the two compounds mentioned above will illustrate this (there are other non-stretching vibrational modes which are omitted): 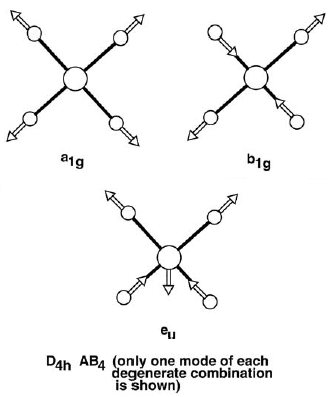 In general this arises because the $\ce{C=O}$, or the $\ce{Xe-F}$, bonds are related by symmetry. In ketones, there aren't any other $\ce{C=O}$ groups next to it, so the $\ce{C=O}$ bond tends to vibrate individually, which allows us to speak specifically of "the $\ce{C=O}$ stretch" in IR spectroscopy.

Another extremely easy-to-spot example of coupling is in primary amines $\ce{RNH2}$ or primary amides $\ce{RCONH2}$ - you will observe two distinct "$\ce{N-H}$" stretches, which are actually symmetric and antisymmetric stretches. Here's an example of a primary amine, $\ce{BuNH2}$: