1. Cleaning geometry Fixing geometries in R can be sometimes challenging, so i've tried to built an experimental R package (see https://github.com/eblondel/cleangeo) that intends to facilitate cleaning of sp objects (at now limited on polygonal shapes). You can install the package with:

To start, it's good that you see what are the geometry issues with your source data. For this, you can run the following (your data is large so it can take some time):

With this, you will see that your data has 2 kinds of issues: orphaned holes and geometry validity issues. Both (and not only the orphaned holes) are likely to make the union process failing, so the data should be cleaned before, in an automate way when possible. For a fast reproduction, the first sample code below only takes the subset of features that are tagged as suspicious (except the latest one, with index = 9002 in the original data - see my note below on this)

If clgeo_Clean does well the job, you should get all geometries valid now. You can apply this to the complete dataset (except feature index = 9002)

2. Union process Now, let's see if the union works on this dataset:

Note: as said before, i've remove one feature (index = 9002).By plotting it: plot(sp[9002,]), you will see that this feature is very (very) complex. I've excluded it from the sample only because checking holes was taking too much time. Let's see now if the same problem occurs using readShapePoly (from maptools) for reading the data...

readOGR is not the only function available to read shapefiles. You can also use readShapePoly from maptools package, generally more performant than the first one:

See below the plot result: 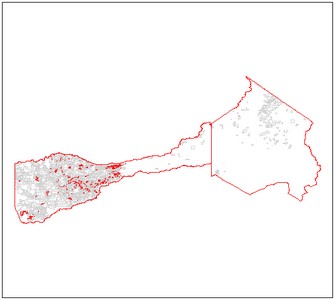 Conclusion: prefer maptools to read your shapefile data, and consider using cleangeo to clean your data before any geoprocessing.

A convenient solution that keeps working for me in R is to apply a zero-width buffer:

unionSpatialPolygons takes a while with this data set, but seems to work just fine.

How to read a shapefile in Python? Making data points different sizes based on data using QGIS? Creating fishnet from template feature class using ArcPy? Is it possible to pan the map in QGIS composer? Starting ArcMap says system clock has been set back more than 24 hours? Change OpenLayers 3 view center Creating catchment from point using DTM raster in QGIS? Example of a "bleeding" raster in GIS? Split lines into non-overlapping subsets based on points Converting huge multipolygon to polygons Accessing histogram in ArcGIS Desktop? SQL query to have a complete geojson feature from PostGIS?
Pandas how to find column contains a certain value Recommended way to install multiple Python versions on Ubuntu 20.04 Build super fast web scraper with Python x100 than BeautifulSoup How to convert a SQL query result to a Pandas DataFrame in Python How to write a Pandas DataFrame to a .csv file in Python