For simplicity, consider non-rotating compact objects. A non-rotating object with mass $M$ becomes a black hole when its radius $R$ is $$ R = 2\frac{GM}{c^2} \tag{1} $$ where $G$ is Newton's gravitational constant and $c$ is the speed of light. Equation (1) is the Schwarzschild radius. According to ref 1, in order to avoid becoming a black hole, the radius of a compact object must be $$ R\gtrsim 2.83 \frac{GM}{c^2}. \tag{2} $$ Equation (2) is the conformal limit (ref 4), sometimes also called the causality constraint (but beware that the latter name is also used for something different).$^\dagger$ It comes from the equation of state for ultrarelativistic particles (ref 2), where the pressure $P$ and density $\rho$ are related to each other by $P=\rho c^2/3$. This, in turn, means that the speed of "sound" in a compact object is limited by $v\equiv \sqrt{dP/d\rho}\leq c/\sqrt{3}$, which limits how quickly one part of the object can react to changes in another part, which in turn leads to the bound (2). This bound is consistent with observation (ref 1).

This puts a limit on (non-rotating) "almost black holes": the radius must be at least 40% greater than the radius of a black hole. Presumably a similar limit can be derived for the more-realistic case of rotating compact objects, but I'm not familiar with it.

Both the Schwarzschild radius (1) and the conformal limit (2) are indicated near the upper-left corner of this mass-versus-radius figure from ref 3: 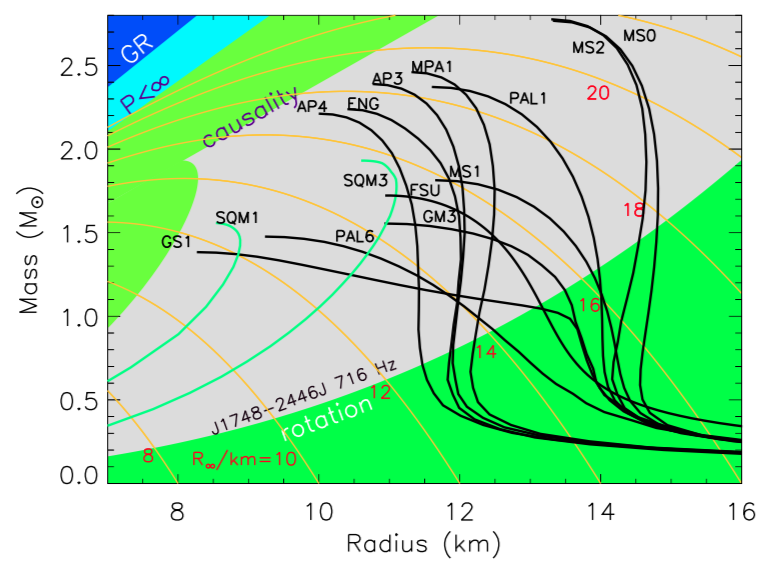 Equation (2) comes from considering the equation of state for ultrarelativistic particles. If a realistic equation of state could exceed the conformal limit, then maybe the conformal limit (2) could be beaten. Table 2 in ref 4 suggests that this might be possible. I'm not familiar enough with that work to comment on how realistic that is, but in any case we still have the Buchdahl bound. The Buchdahl bound comes from requiring that the pressure at the center of the object is finite and that the density decreases away from the center (ref 2). The Buchdahl bound is $$ R > \frac{9}{4}\,\frac{GM}{c^2}, \tag{3} $$ which says that the radius of an "almost black hole" must be at least 12% greater than the Schwarzschild radius.

As explained in ref 5, if light comes close to a certain critical radius of a sufficiently compact object, the gravity can be so strong that the light loops around the object arbitrarily many times before leaving the vicinity, and it can leave in any direction (depending on the precise details of how close to the critical radius). That critical radius is $3 GM/c^2$, 50% larger than the Schwarzschild radius, so an object as compact as (2) or (3) would show this effect. Here's an example from figure 3 in ref 5: 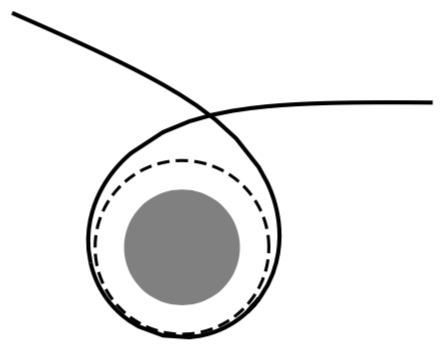 The shaded area is a circle with the Schwarzschild radius (so the compact object will be a bit larger than this), the dashed line shows the critical radius (equations (2) and (3) represent objects smaller than this), and the solid line is the trajectory of the light. The same paper also includes several other figures illustrating various light-bending effects due to such a compact object.

The idea of searching for neutron stars (and other compact objects) using their gravitational-lensing effect has received some attention. Ref 6 is one example.

(The question is written informally, so my answer is. "For simplicity" <smirk>)

Neutron stars are massive, incredibly dense, hence have very strong gravity; but not so strong that light cannot escape. It has no "event horizon"; but you wouldn't want to be near it.

Related: Quark star (a hypothetical type of star even more dense than a neutron star). – Comment added by @DevSolar - thank you!

How do photons affect each other gravitationally? Estimating of the size of the Milky Way from the Sun's motion Charged Black Hole in 1+2 dimensions without cosmological constant Why can't an electric field line suddenly break? Will a plastic feel less heavy when I put it in a bucket of water and carry it? Renormalization and regularization operators for ultracold atoms Doubt on the need for Topological Manifolds Does doubling density (keeping average gas molecule speed the same), increase temperature recorded on a thermometer? Can X-ray diffraction be applied to liquids, gasses or non-crystalline materials? Why can't virtual images form on a screen? Why do electric field lines curve at the edges of a uniform electric field? The "real butterfly effect"
Pandas how to find column contains a certain value Recommended way to install multiple Python versions on Ubuntu 20.04 Build super fast web scraper with Python x100 than BeautifulSoup How to convert a SQL query result to a Pandas DataFrame in Python How to write a Pandas DataFrame to a .csv file in Python