Why is the Plane progressive wave equation $y= a\sin (kx-wt)$ for positive direction of x-axis?

Let's take the argument of the function i.e, $kx-\omega t$. The argument of the function should remain constant,(equivalently the phase must remain constant)for a particular section of the wave. \begin{equation} kx-\omega t=\lambda \end{equation} where $\lambda$ is a constant. Differentiating both sides we get, \begin{equation} k\frac{dx}{dt}=\omega \end{equation} which is positive, thus this represents a wave travelling in positive direction. Similarly for the wave travelling in negative direction.

This can be illustrated by plotting also, the blue wave represents wave at $t=0$ and the orange wave represents wave at a later time, As you can see, the wave has moved in left direction for the first figure for the equation $y=a\sin(kx+\omega t)$ and in the right for the second i.e for $y=a\sin(kx-\omega t)$ case.Consider the blue wave below at some $x$, now if you want to make the wave move, then you need the same $y$ at some other $x$ and $t$, thus for the first case,it happens when $x$ becomes less positive, or moves to the left, implying that the wave has traveled in negative direction. 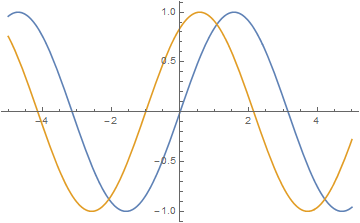 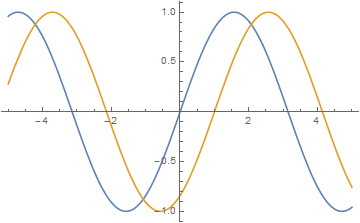 Since the wave and hence the "information" is travelling to the right at some later time $t + \Delta t$ a particle at $x + \Delta x$ will have the same displacement $y$.
In other words the peak has travelled a distance $\Delta x$ in a time $\Delta t$ with both $\Delta x$ and $\Delta t$ both positive.

So if you want to watch the progress of a right travelling wave, ie follow a peak as time $t$ and position of peak $x$ increases you need to keep $kx - \omega t$ constant.

Why can't a real scalar couple to the electromagnetic field? Milk or sugar first to maximize temperature of a hot cup of tea? Don't all waves transport mass? An explanation of Hawking Radiation Are dimensionless physical constants predicted to be rational, irrational, or transcendental numbers? Why is heat transfer reversible when temperature difference is infinitesimal? Is the conservation of angular momentum violated in electron jumps from one orbital to another? How could the universe be hyperbolic if hyperbolic space isn't symmetrical? How does Zumberge's 1981 gravitational measurements relate to gravitational waves? Spin operator matrix representations in Sx basis GR and my journey to the centre of the Earth How is the curl of the electric field possible?
Pandas how to find column contains a certain value Recommended way to install multiple Python versions on Ubuntu 20.04 Build super fast web scraper with Python x100 than BeautifulSoup How to convert a SQL query result to a Pandas DataFrame in Python How to write a Pandas DataFrame to a .csv file in Python