Chemistry - Why is isoindole unstable?

Kopecký et.al. indeed utter the word unstable, but not in the sense of its recommended definitions, which were established later.

Although the parent compound, isoindole (I), has resisted isolation, the existence of this unstable species has been shown by trapping with dienophiles (i).

The problem here is that stability always requires a point of reference, which is not given in the quote above.
I would assume that the authors use unstable (or instability) as a way to say the compound cannot be isolated. They go on and justify why this compound behaves in this way, describing what I would say is its reactivity. While their argument is sound and I believe correct, the choice of their wording is a little bit ambiguous (in today's terms).
We clearly need to distinguish a compounds reactivity (towards a certain reaction) from its stability within a common set of parameters. As such the following statements are correct, but neither of them is a justification for the other.

While statement one is easy enough to prove computationally, it is a lot harder to explain or analyse. Quick calculations on the DF-M06L/def2-TZVPP level of theory gives the following hypothetical reaction energy: $$\begin{align} \ce{1$H$-indole &-> 2$H$-isoindole} & \Delta_\mathrm{r}G^\circ &= +38.6~\pu{kJ mol^-1} \end{align}$$

Unfortunately Kopecký et.al. offer no explanation for this, because they are more or less focused on explaining why it is "unstable", by which they most likely mean highly reactive or not isolatable. They are concerned with the reaction paths that lead away from this species and find that 1H-isoindole plays a big (probably most important) role in this.

I think this analysis is spot on a holds up to modern standards of computational methodology. The 1H-tautomer indeed opens up a very big variety of decomposition and reaction pathways, and it is readily accessible at room temperature (DF-M06L/def2-TZVPP): $$\begin{align} \ce{2$H$-isoindole &-> 1$H$-isoindole} & \Delta_\mathrm{r}G^\circ &= +3.4~\pu{kJ mol^-1} \end{align}$$

The reason for this is - and this is the point where Joule and Mills get it completely wrong - the retention (not the creation) of the aromatic system in the benzene moiety. The chemical behaviour (reactivity towards cycloadditions) is not determined by the lack of a 'complete' benzene ring. But that is us slipping into statement 2, which we are not quite ready yet.
Let us first dissect the latter statement in the same book (p.447), which is equally as wrong:

Although they offer no appreciable effort to prove this statement they are probably correct. At least the calculations for the $\ce{C8NH7}$ system confirm that. They even use the correct (or recommended) definition of stable in this case.

This is undoubtedly associated with their lower aromaticity, which can be appreciated qualitatively by noting that in these [c]-systems, the six-membered ring is not a complete benzenoid unit.

Again, they offer no proof for that other than a hand-wavy argument based on a single Lewis-structure. If we include resonance into the mix then we have an at least as reasonable argument as this to disprove it.

If we have a look at the molecular orbitals of the compounds, we will see that there is more to this than just one resonance description. I have pulled out two characteristic molecular orbitals for example, but the complete set can be found here. On the left side (top) we have 1H-indole and on the right side (bottom) we have 2H-isoindole. Apart from a light shift of the electron density due to the loosened symmetry in indole, the orbitals are pretty much the same.

When we take the 1H-isoinole isomer into the mix, we see that the aromatic system of the benzene ring is retained completely. 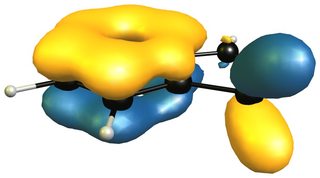 Aromaticity is still not a fully understood concept and as a result there is not really a rigorous concept that can be applied (see the definitions below). There will probably be debate about it for the next decades. (Hopefully my bounty will pay off and we can find out more in this question.)
As a result we don't really have a handle on judging whether or not 2H-isoindole has a lower aromaticity than 1H-indole. And according to Kopecký's paper, with available methods at this time, this cannot be backed up with theoretical results.

While I hoped to find some experimental evidence for the existence of isoindole due to the general progress within the last fifty years, I was still unable to find a single source.

I'll skip over the rest of the quote because the stated facts are certainly accurate, just the reasoning with the 'incomplete' benzene ring is false.

Let's look at statement two for a while.
The reactivity of 2H-isoindole towards dienophiles is very easily explained looking at the HOMO of the compound; for comparison the HOMO of butadiene on the right (bottom). 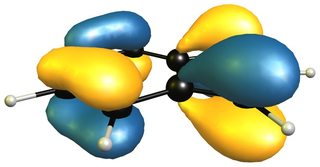 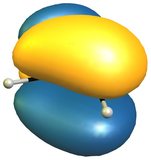 The very easy rationale is that the HOMO is of the right symmetry for a Diels-Alder reaction, which additionally retains the aromatic character of the benzene moiety.
Now a look at the HOMO (left/ top) of 1H-indole will tell us that the only viable attack can be carried out on the 4,7-positions, leaving a much smaller aromatic moiety, i.e. pyrrole, than isoindole. The only way for an inverse electron demand Diels-Alder reaction would also be in the benzene moiety as the LUMO (right/ bottom) shows. 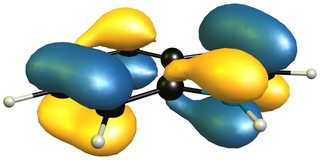 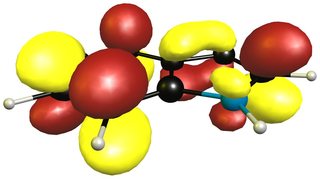 This is why one molecule reacts readily, while another has to be forced (really, really hard) or reacts as the dienophile via 'the double bond in the pyrrole system'.

"Why is isoindole less stable than indole?"

As I said before, this is really not easy to interpret. In general, lifting symmetry restrictions results in a more stable configuration, as fewer boundary conditions equal more flexibility and that usually gives a lower energy.
One aspect is certainly also that the lone pair of the nitrogen will be better delocalised in indole as there are more carbon atoms in proximity. This is actually something visible in the molecular orbitals.
Apart from that, neither geometries differ much from idealised benzene ($\mathbf{d}(\ce{C-C})=138.7~\pu{pm}$) or pyrrole($\mathbf{d}(\ce{C-N})=136.7~\pu{pm}$, $\mathbf{d}(\ce{C-C'})=137.1~\pu{pm}$, $\mathbf{d}(\ce{C'-C'})=141.4~\pu{pm}$, picture), so that a significant distortion energy is probably not a large contributing factor. 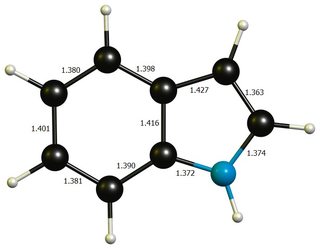 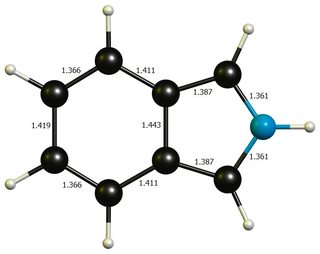 By this logic, I would expect other carbons in this situation, $\ce{C_{ar}-\color{\red}{C}=N}$, to also be very electron-deficient. However, aromatic Schiff bases seem pretty common, for example salen. What am I missing?

It is true that the carbon atoms in question will be very electron deficient, and they will probably be a good attach point for nucleophiles. In the salen ligand the nitrogens are probably stabilised by intramolecular hydrogen bonds, and while in complexes the entropy factor should make is very stable, too.

One final thought: Carbonic acid decomposes rapidly in water, however, it is seldom questioned, that the molecule itself is stable under certain conditions.

My personal preferred definition for stable: An certain arrangement of atoms that forms a local minimum on a potential energy hypersurface and therefore could theoretically probed is stable.

aromaticity
The concept of spatial and electronic structure of cyclic molecular systems displaying the effects of cyclic electron delocalization which provide for their enhanced thermodynamic stability (relative to acyclic structural analogues) and tendency to retain the structural type in the course of chemical transformations. A quantitative assessment of the degree of aromaticity is given by the value of the resonance energy. It may also be evaluated by the energies of relevant isodesmic and homodesmotic reactions. Along with energetic criteria of aromaticity, important and complementary are also a structural criterion (the lesser the alternation of bond lengths in the rings, the greater is the aromaticity of the molecule) and a magnetic criterion (existence of the diamagnetic ring current induced in a conjugated cyclic molecule by an external magnetic field and manifested by an exaltation and anisotropy of magnetic susceptibility). Although originally introduced for characterization of peculiar properties of cyclic conjugated hydrocarbons and their ions, the concept of aromaticity has been extended to their homoderivatives (see homoaromaticity), conjugated heterocyclic compounds (heteroaromaticity), saturated cyclic compounds (σ-aromaticity) as well as to three-dimensional organic and organometallic compounds (three-dimensional aromaticity). A common feature of the electronic structure inherent in all aromatic molecules is the close nature of their valence electron shells, i.e., double electron occupation of all bonding MOs with all antibonding and delocalized nonbonding MOs unfilled. The notion of aromaticity is applied also to transition states.

Perhaps that paper is wrong, and instead isoindole is unstable because it doesn't have a complete benzene ring. This quote from Heterocyclic Chemistry, by Joule and Mills is relevant (p. 372):

Image text: The chemical behaviour of isoindole, benzo[c]furan and benzo[c]thiophene is dominated by their lack of a ‘ complete ’ benzene ring: these three heterocycles undergo cycloaddition processes across the 1- and 3-positions with great facility, because the products do now have a regular benzene ring. Often, no attempt is made to isolate examples of these heterocycles, but they are simply generated in the presence of the dienophile with which it is desired that they react. As a result of this strong tendency, few of the classical electrophilic and nucleophilic processes have been much studied.

Can someone tell me if this is correct?

Edit: Later (p.447) the book explicitly states that this is why isoindole is unstable: 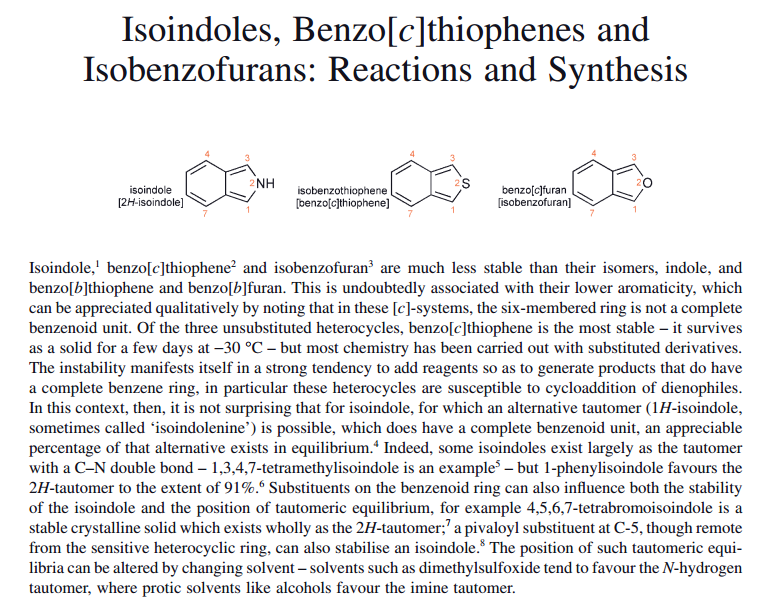 Image text: Isoindole1, benzo[c]thiophene2 and isobenzofuran3 are much less stable than their isomers, indole, and benzo[b]thiophene and benzo[b]furan. This is undoubtedly associated with their lower aromaticity, which can be appreciated qualitatively by noting that in these [c]-systems, the six-membered ring is not a complete benzenoid unit. Of the three unsubstituted heterocycles, benzo[c]thiophene is the most stable – it survives as a solid for a few days at −30 °C – but most chemistry has been carried out with substituted derivatives. The instability manifests itself in a strong tendency to add reagents so as to generate products that do have a complete benzene ring, in particular these heterocycles are susceptible to cycloaddition of dienophiles. In this context, then, it is not surprising that for isoindole, for which an alternative tautomer (1H-isoindole, sometimes called ‘ isoindolenine ’ ) is possible, which does have a complete benzenoid unit, an appreciable percentage of that alternative exists in equilibrium.4 Indeed, some isoindoles exist largely as the tautomer with a C–N double bond – 1,3,4,7-tetramethylisoindole is an example5 - but 1-phenylisoindole favours the 2H-tautomer to the extent of 91%.6 6 Substituents on the benzenoid ring can also influence both the stability of the isoindole and the position of tautomeric equilibrium, for example 4,5,6,7-tetrabromoisoindole is a stable crystalline solid which exists wholly as the 2H-tautomer;7 a pivaloyl substituent at C-5, though remote from the sensitive heterocyclic ring, can also stabilise an isoindole.8 The position of such tautomeric equilibria can be altered by changing solvent - solvents such as dimethylsulfoxide tend to favour the N-hydrogen tautomer, where protic solvents like alcohols favour the imine tautomer.