Why is acceleration directed inward when an object rotates in a circle?

As a rule of thumb: when somebody states that something is obvious you should really doubt everything he says. Especially if he is an ex navy seal :)

Think about the ball moving in circle: Newton's first law of dynamics states that if an object is left alone, meaning: the object is not subjected to forces, it would keep moving with the same velocity. Remember that velocity is a vector, so this statement means that the object left alone would keep also the same direction of motion.

But in the case of a ball moving in circle of course its direction of motion changes with time, this must imply that the ball is subjected to a force (remember that a force $\vec{F}$ creates an acceleration $\vec{a}$ according to the second law of dynamics: $\vec{F}=m\vec{a})$. Ok, but the force pulls inward or outward? (That is analogous to asking: the acceleration is directed inward or outward?) Well think again about the velocity of the ball: as time passes the velocity curves inward, this must mean that the acceleration is directed inward.

But why then if you let the ball free it moves outward? The answer is that it doesn't really move outward, it simply begins moving in a straight line again since you are no longer applying force to it, as the first principle of dynamics states. Everything is consistent. Of course moving in a straight line in this context means moving away from the previous location of the rotational motion, so an observer has the impression of the ball moving away from the center, when the ball is as stated simply continuing his motion with the velocity it had at the time of release.

From this very simple fact, we can surmise that when swinging a ball on a rope, the ball is accelerating toward the center, since it is impossible for the rope to impart a force on the ball in any other direction. To suggest that the ball is accelerating outward when it's released would mean that the person provides a "push" when letting go, and that the rope is capable of transmitting such a push, both of which are false - even if the person swinging the ball does "push" when they let go, there is simply no way for a rope to transmit that push to the ball.

I would explain the correct answer without reference to forces. Basically, this is a question about acceleration and I would not introduce forces or another reference system. in addition to the one where the motion is described as a circular motion.

Now, in a circular motion (uniform or not, does not matter), the velocities at two times $t$ and $t+\Delta t$ are not aligned (the velocity is always tangent to the circle). Moreover, whatever is the direction of $\vec{v}(t)$, $\vec{v}(t+\Delta t)$ bends toward the side of the trajectory where the center of the circle is.

The following picture shows the geometry 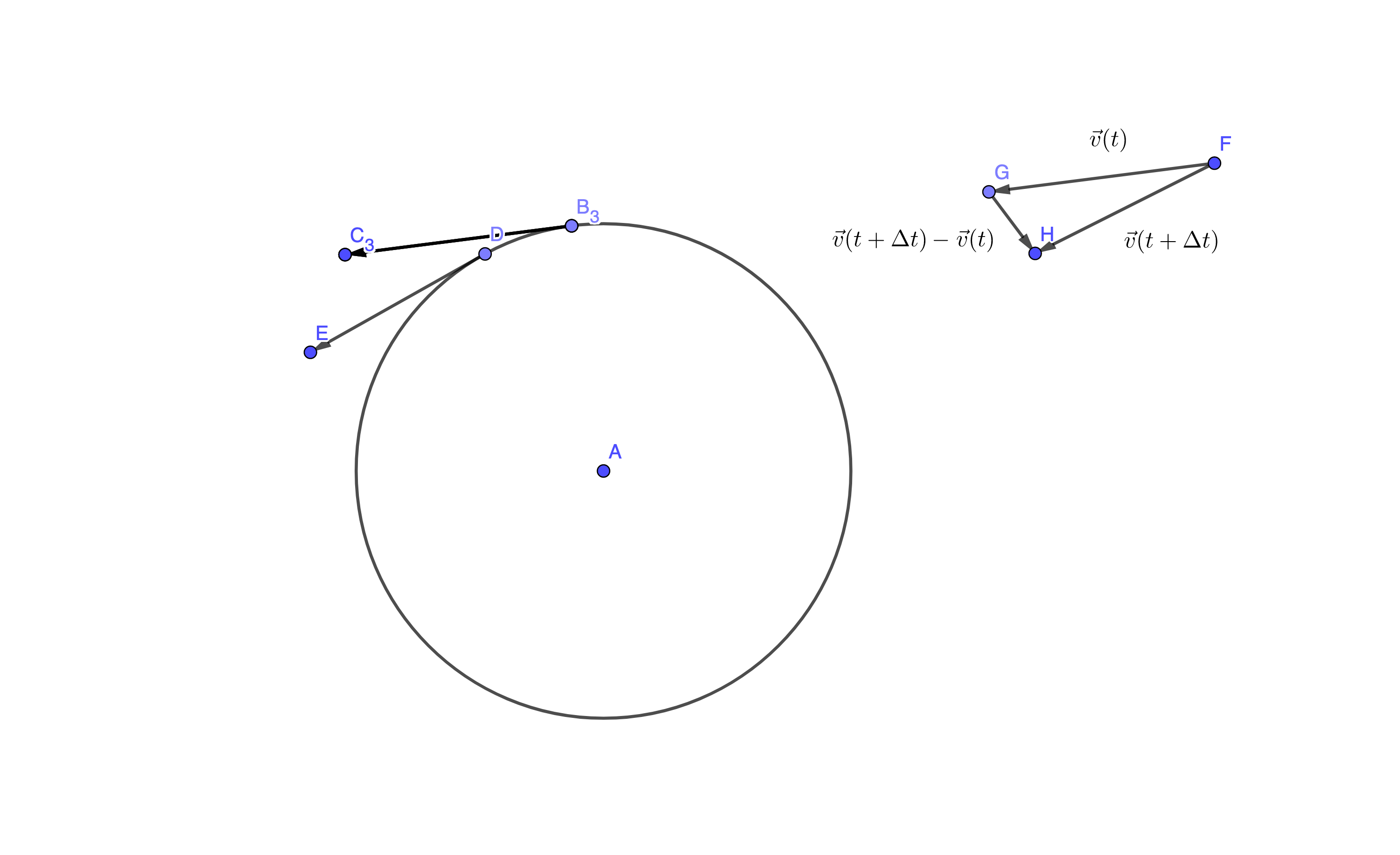 Of course, the previous elementary argument can be made completely formal by using a little of differential geometries of curves in 2 and 3 dimensions.

Do time dilation and length contraction cancel out? Intrinsic Curvature of a Cylinder Why is it easier to handle a cup upside down on the finger tip? Nuclear beta decay to hydrogen Why is it impossible to measure position and momentum at the same time with arbitrary precision? Inconsistency in the normal ordered Virasoro algebra Formula for centripetal acceleration: simple proof that does not use calculus? What happens to our force when we walk on ice? Does a rotating rod have both translational and rotational kinetic energy? Experimental exactness of Schrödinger equation for more than 100 particles How does the orbital motion of reduced mass tell us how the individual planets/stars move? What keeps the cookie in my coffee from moving when I rotate the cup?
Pandas how to find column contains a certain value Recommended way to install multiple Python versions on Ubuntu 20.04 Build super fast web scraper with Python x100 than BeautifulSoup How to convert a SQL query result to a Pandas DataFrame in Python How to write a Pandas DataFrame to a .csv file in Python