Chemistry - Why exactly does precipitation occur?

Maybe it will help to think first about a ridiculous case. Say you have a large hydrophilic solid, and a small drop of water is added on top. We would not expect the entire solid to disappear into the liquid. Yes, there will be some adsorption and solubility here, yet most of the solid will remain undisturbed. In some sense, the solid 'does not fit' into the liquid droplet over a certain limit.

Similar things are true, again in a certain interpretation, for more realistic situations. What does this 'fitting' mean exactly? It definitely does not mean there is not enough physical space per se. Instead as you increase the concentration of your solute, the distances between solute entities starts to decrease on average. Hence, at a certain radii the intermolecular forces become strong enough to pull the solutes together. There is often some energy barrier to this approaching, as colloid chemists will tell you, but if the end result is some energy minimum, the process will occur at some rate.

You may compare precipitation to condensation of water in air. There is plenty of actual physical space to go around but once a certain limit is crossed (the dew point) the water will become liquid. Nitrogen and oxygen will not condense at these temperatures since their intermolecular forces are much weaker.[a]

Note first that for $\Delta_\pu{r} G \leq 0$ ($\Delta G$ was poor notation on my part) to be the criterion (necessary and sufficient) of spontaneity, some five conditions must be met: constant temperature, no pressure change, only expansion work is done, and the application of the thermodynamic limit. Fifthly, only one chemical reaction is assumed to take place.[b] Provided these prerequisites stand, we may look at the terms in

(We should not really compare entropy directly to enthalpy because they have different dimensions.) Jumping in quickly, we might say immediately that if the solute can wriggle around more in a solution than in a solid, then certainly $\Delta_\pu{r} S>0$ for the transition $\text{solid}\to\text{solute}$. The only thing standing in our way is that damned enthalpy! Sure enough, that may be the case for some solutions but it is not the whole picture.

Since the solute entities have a solvent layer in solution, there is an entropy effect for the solvent as well. If the solvent is tightly bound to the solute, entropy decreases for this solvent entity. There is also an enthalpy contribution from solvation, not only from the act of breaking or forming bonds in a solid. I would not really dare to generalise which is the bigger contributor 'for most cases'. In general,

where 'residual' signals the solute-solute interactions in the solution.

From the IUPAC Gold Book,

As pointed out by Nicolau Saker Neto in a comment, we should not overemphasise the role of $K_{\pu{sp}}$ in determining solubility. Again there are cases where it is a good indicator, and situations where it fails poorly. There are assumptions which must be satisfied:

[a] I have largely ignored the discussion of surface energies and surface tension, and how the interaction is often more favourable in the bulk than on the surface, and the fact that $r^3$ grows faster than $r^2$, except for small $r$ when it does not, and hence we need some seeds or nuclei to start the process, and supersaturation, and how particle sizes change etc. The example of smaller particles dissolving more is, of course, a surface tension effect.

[b] In the thermodynamic limit, the general condition of spontaneity comes from Clausius inequality. This is written as

With the first law of thermodynamics, this is equivalent to

With constant temperature and pressure,

Finally, if only expansion work is done,

where $\small{\Delta_\pu{r} \equiv \partial / \partial \xi}$; $\small{\xi}$ is the extent of a reaction. The last result also assumes only one reaction takes place, otherwise it is no longer a necessary–sufficient condition for spontaneity.

Although you ask specifically about forming precipitates your question is also about the solubility of one substance in another. The simplest answer as to why precipitates form is because the free energy $G$ is minimised when some solid, its solute and solvent exist in equilibrium compared to the situation of only solute in a solvent or only solid and solvent. To estimate how quickly the precipitate forms one must appeal to chemical kinetics not thermodynamics.

If the solute is A and solvent B, when a solution forms the molecules will mix freely and the number of ways they they are distributed with respect to one another is vastly larger, compared to the unmixed state, and thus the entropy is greater. However, molecules have attractive intermolecular forces and these are of the form AA, BB and AB. (We need not consider the exact form these take unless we wish to calculate their exact values.)

In an isolated system suppose that the attractive force between solute and solvent (AB) is of a larger magnitude than of A with themselves or B with themselves, then complete mixing would imply that the potential energy of the whole system will have to increase and this can only happen, as the system is isolated, by withdrawing (thermal) energy from the motion of the molecules. This means reducing the number of translational, vibrational and rotational quanta in the molecules. This implies a decrease in the entropy as the number of ways energy can be distributed among the molecules is reduced. Thus it may be the case that the overall entropy maximum occurs when A and B are not completely mixed, i.e. some precipitate is formed or two liquid phases form if the temperature is high enough.

To discuss the same system in equilibrium at constant pressure and temperature then the Gibbs free energy is important $G=H-TS$ and clearly a decrease in $G$ is favoured by a decrease in $H$ and an increase in $S$. We are now considering the system in the presence of a heat bath which keeps the temperature constant and so prevents a decrease in thermal energy. The entropy is now mostly unchanged and the intermolecular forces now greatly influence the enthalpy and consequently the solubility of A in B.

If $E_{AA}$ is the increase in potential energy between two A molecules and $E_{BB}$ for B and $E_{AB}$ between A and B then the increase in potential energy by transferring one molecule of A from the pure liquid A to pure B and vice versa is $\approx 2(E_{AB}-(E_{AA}+A_{BB})/2)\, )$, which means that the interaction between A and B is to be compared to the average of the energies between AA and BB. If $E_{AB}$ is a smaller negative number than the mean of $E_{AA}$ plus $E_{BB}$ then there is an increase of enthalpy on mixing, and this favours increasing $G$ and works in the opposite direction as any increase in $S$. This situation thus favours forming a precipitate, but, of course, there will always be some molecules of the solid, (as solute) in the solvent even if the amount is nanomolar.

This equation describes the ideal solubility of solids in liquids and was first derived 1893, a surprisingly long time ago. In older literature $\Delta H_m$ is called the Latent heat of melting). This equation can also be derived without the 'trick' used above using $\displaystyle d(\mu_{(s)}/T)=d(\mu_{(l)}/T)$.

For molecules such as naphthalene in benzene, carbon tetrachloride this equation provides a fairly good description of the solubility vs temperature. A more accurate expression could be realised by considereing the temperature dependence of $\Delta H_m$. This equation is entirely analogous to that for the depression of the meltig point and a plot of temperature vs mole fraction can illustrate both depression of the melting-point (the freezing-point curve) and the solubility curve as shown in the rough sketch. 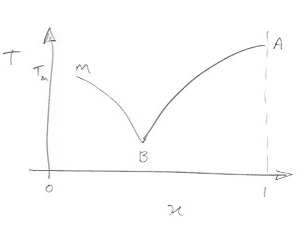 Solubility is the concentration at which the chemical potentials of the solute in itself and in the solution are equal.

The chemical potential of a substance is the change in Gibbs free energy upon adding a molecule to the system and is determined by the interactions between the molecule and the rest of the system. This is where we get the "like-dissolves-like" rule of thumb. The chemical potential of a substance in a system that doesn't already contain it is very low as the system can "tolerate" its presence without much entropic penalty. As the concentration increases, so does the chemical potential and at some concentration it will become equal to that of the bulk state of the pure solute. In the case of miscibility, this equality never occurs.

In the case of inducing precipitation, you are driving the chemical potential of the solute in the solution higher so the solute molecules attract each other more strongly than the solvent molecules. This requires an activation energy to overcome entropy and large barriers lead to supersaturation.

Chemistry - Justifying the tremendous −I effect of trimethylammonium group by molecular orbital theory Chemistry - Are children's sparklers based on a magnesium reaction? Chemistry - What kind of chemical used in a chromatography run could be denoted with the letters D.H.? Chemistry - Lewis Structure For H2SO4 Chemistry - What happens to the argon in the Haber-Bosch process? Chemistry - Irreducible representations and system states connection Chemistry - Synthesis Golf VIII: 4,6-Diacetylhygrophorone A12 Chemistry - How to name Hg[Co(SCN)4]? Chemistry - Rate of reaction for hundred reactants Chemistry - Where does magnetic inequivalence come from? Chemistry - Arrows used in chemical reactions Chemistry - Etymology of saturation degrees (-ane, -ene, -yne) in aliphatic compounds
Pandas how to find column contains a certain value Recommended way to install multiple Python versions on Ubuntu 20.04 Build super fast web scraper with Python x100 than BeautifulSoup How to convert a SQL query result to a Pandas DataFrame in Python How to write a Pandas DataFrame to a .csv file in Python