I myself was always confused why $\ce{H3O^+}$ is so well-known and yet almost nobody talks of $\ce{H4O^2+}$. I mean, $\ce{H3O^+}$ still has a lone pair, right? Why can't another proton just latch onto that? Adding to the confusion, $\ce{H4O^2+}$ is very similar to $\ce{NH4+}$, which again is extremely well-known. Even further, the methanium cation $\ce{CH5+}$ exists (admittedly not something you'll find on a shelf), and that doesn't even have an available lone pair!

Yes, that's right. In this reaction $\ce{H3O^+}$ is the base, and $\ce{H^+}$ is the acid. Because solvents can strongly influence the acidity of basicity of dissolved compounds, and because inclusion of solvent makes calculations tremendously more complicated, we will restrict ourselves to the gas phase (hence $\ce{(g)}$ next to all the formulas). This means we will be talking about proton affinities.

Before we get to business, though, let's start with something more familiar:

Because this is in the gas phase, we can visualise the process very simply. We start with a lone water molecule in a perfect vacuum. Then, from a very large distance away, a lone proton begins its approach. We can calculate the potential energy of the whole system as a function of the distance between the oxygen atom and the distant proton. We get a graph that looks something like this:

For convenience, we can set the potential energy of the system at 0 when the distance is infinite. At very large distances, the lone proton only very slightly tugs the electrons of the $\ce{H2O}$ molecule, but they attract and the system is slightly stabilised. The attraction gets stronger as the lone proton approaches. However, there is also a repulsive interaction, between the lone proton and the nuclei of the other atoms in the $\ce{H2O}$ molecule. At large distances, the attraction is stronger than the repulsion, but this flips around if the distance is too short. The happy medium is where the extra proton is close enough to dive into the molecule's electron cloud, but not close enough to experience severe repulsions with the other nuclei.

In short, a lone proton from infinity is attracted to a water molecule, and the potential energy decreases up to a critical value, the bond length. The amount of energy lost is the proton affinity: in this scenario, a mole of water molecules reacting with a mole of protons would release approximately $\mathrm{697\ kJ\ mol^{-1}}$ (values from this table). This reaction is highly exothermic

Alright, now for the next step:

This should be similar, right? Actually, no. There is a very important difference between this reaction and the previous one; the reagents now both have a net positive charge. This means there is now a strong additional repulsive force between the two. In fact, the graph above changes completely. Starting from zero potential at infinity, instead of a slow decrease in potential energy, the lone proton has to climb uphill, fighting a net electrostatic repulsion. However, even more interestingly, if the proton does manage to get close enough, the electron cloud can abruptly envelop the additional proton and create a net attraction. The resulting graph now looks more like this: 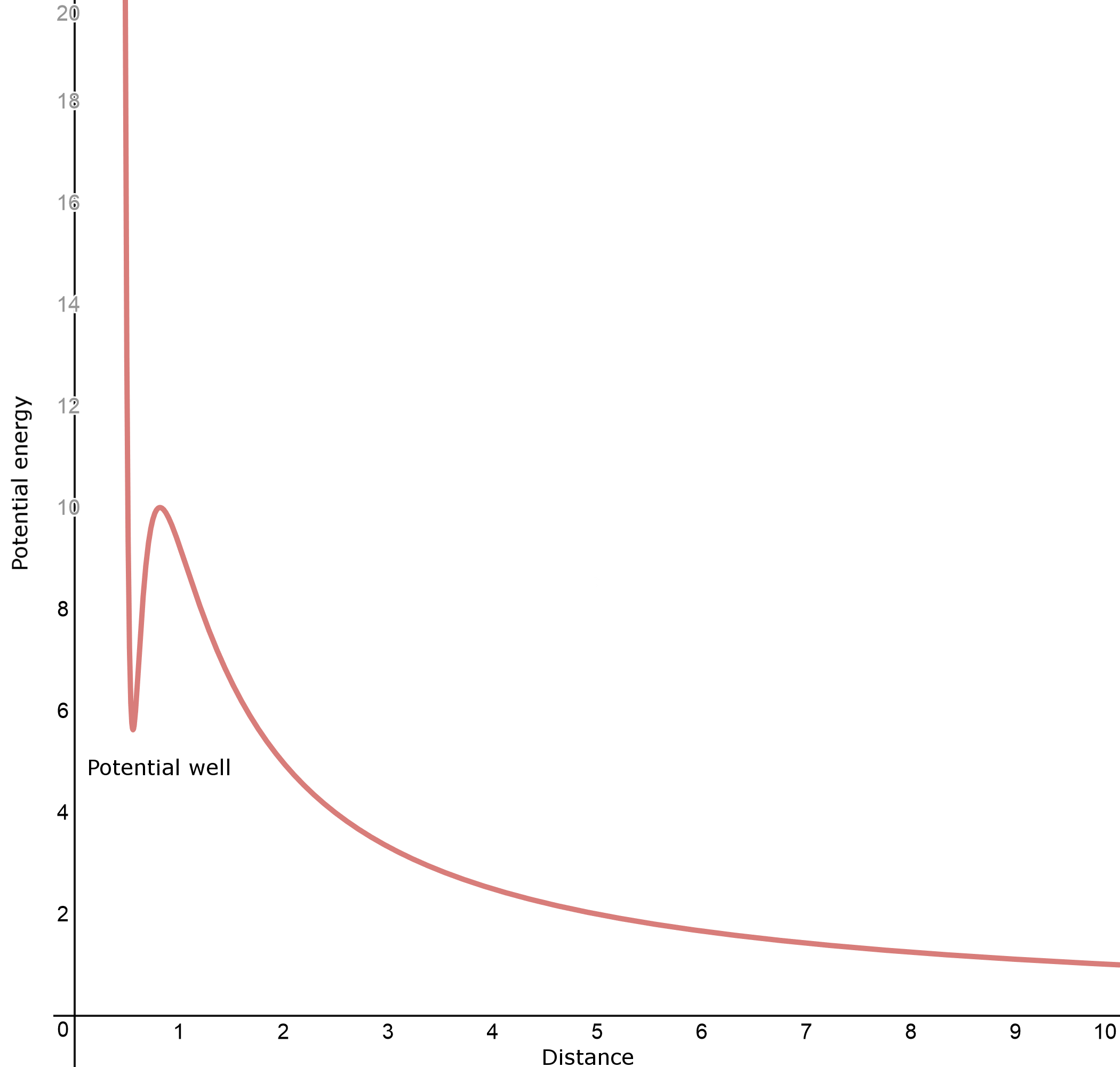 Due to the fact that $\ce{H4O^2+}$ was calculated to form a potential well, it can in principle exist. However, since it is the product of a highly endothermic reaction, unsurprisingly it is very hard to find. The reality in solution phase is more complicated, but its existence has been physically verified (if indirectly).

I've run a rough calculation myself using computational chemistry software, and here it seems we really do reach a wall. It appears that $\ce{H5O^3+}$ is an unbound system, which is to say that its potential energy curve has no pocket like the ones above. $\ce{H5O^3+}$ could only ever be made transiently, and it would immediately spit out at least one proton. The reason here really is the massive amount of electrical repulsion, combined with the fact that the electron cloud can't reach out to the distance necessary to accommodate another atom.

EDIT: I've done some calculations of proton affinities/stabilities on several other simple molecules, for comparison. I do not claim the results to be quantitatively correct.

In chemistry ask "why" only after you ask "if".

Given a sufficiently strong superacidic medium, $\ce{H3O^+}$ can be protonated to $\ce{H4O^{2+}}$. Evidence for this reaction, by studying isotopic exchange in a $\ce{HF + SbF5 +SO2}$ solvent, is given here.

$\ce{H4O^{2+}}$ is, of course, a powerful protic acid, and it would be leveled to something weaker, meaning $\ce{H3O^+}$ and maybe other products, except in superacids as in the above reference.

A subtle difference between $\ce{H4O^{2+}}$ and $\ce{SO4^{2-}}$ is the presence of atoms with odd atomic number in the former. An odd atomic number means an odd number of protons, so $\ce{H4O^{2+}}$ can split off or transfer a component ($\ce{H^{+}}$) having a single charge and an odd number of odd-proton atoms, without having to break up any electron pairs (no need to form radicals). Hence, unless the environment is suffuciently acidic/nonbasic, this ion could break up relatively easily to singly charged products. $\ce{SO4^{2-}}$ lacks this option; as this ion has only even atomic number atoms it cannot break up into singly charged species without the unfavorable formation of radicals.

We see a similar phenomenon in the autoionization of solvents like water, ammonia or even dinitrogen tetroxide (p. 217). Solvents are more likely to autoionize if they have odd atomic number atoms (like hydrogen or nitrogen) with which singly charged, nonradical species can form.

The oxygen in water already becomes electron-deficient when it forms $\ce{H3O+}$. In your (not completely, see below) hypothetical $\ce{H4O^{2+}}$, the additional proton barely finds any electron density to make a covalent-ish bond with.

Whereas for the sulfate ion, you just have to distribute some extra charge over a relatively large molecule.

So $\ce{H4O^{2+}}$ exists, at least in theory, but it is extremely unstable. It's properties have been detailed (with links to scientific papers) here: What is the Ka of OH- and Kb of H3O+?

Chemistry - Why is dichloromethane immiscible in water? Chemistry - Reasons for negative iodoform test Chemistry - Why are synthetic pH indicators used over natural indicators? Chemistry - Melting point of aspirin, contradicting sources Chemistry - Can a stoichiometric mixture of oxygen and methane exist as a liquid at standard pressure and some (low) temperature? Chemistry - Why does the degree of dissociation change when we dilute a weak acid even though the equilibrium constant is constant? Chemistry - Molecular orbitals used with CCSD(T) geometries Chemistry - Is there a difference between equilibrium and steady state? Chemistry - Why does liquid water form when we exhale on a mirror? Chemistry - Inorganic chemistry handbook with reaction lists Chemistry - Linear Combination of Atomic Orbitals Chemistry - Relationship between the symmetry number of a molecule as used in rotational spectroscopy and point group
Pandas how to find column contains a certain value Recommended way to install multiple Python versions on Ubuntu 20.04 Build super fast web scraper with Python x100 than BeautifulSoup How to convert a SQL query result to a Pandas DataFrame in Python How to write a Pandas DataFrame to a .csv file in Python