Why doesn't an RC circuit change the shape of an input sine?

Learn to think in frequency space. This is one of those things that is difficult to see in the time domain, but falls out nicely in the frequency domain.

A sine wave is a single "pure" frequency. A RC filter is a linear system that can't distort, meaning it can't create frequencies in the output that aren't in the input. When you only put in one frequency, the output can only contain that one frequency. The only questions are what the relative amplitude and phase shift will be from input to output.

The reason that a square wave in does not result in a square wave out is because a square wave contains lots of frequencies. Each of those can be attenuated and phase shifted independently. When you change the relative strength and phases of harmonics, you get a different looking signal in the time domain.

A square wave can be thought of as the superposition of a infinite series of sines. These are at all the odd harmonics (odd integer multiples of the fundamental frequency). The amplitude of these harmonics falls off at higher frequencies. 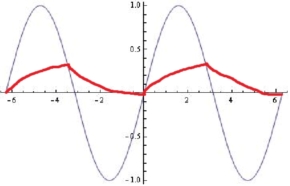 This is not how any RC filter would react:

Either way, there won't be sudden changes in output slope as you show. There is nothing special about the input crossing above or below the output since this happens smoothly. You get a inflection point in the output, but its a smooth hump since the input approaches smoothly before and leaves smoothly after.

It might be instructive to write a loop to simulate this yourself. All you have to do each step is change the output by a small fraction of the instantaneous difference of the input minus the output. That's it. Then throw a sine wave at it and see how the output smoothly follows to make another sine, although lagging in phase and lower in amplitude.

When the input and the capacitor are at 0 V and the input starts rising, the capacitor voltage should start rising slowly, since the input voltage (and hence the voltage difference) is also small.

When the input peaks, the difference in voltage is at maximum, and here the capacitor voltage rises fastest. When the input voltage starts going down, the rate of the capacitor's charging also goes down. After the two voltages have met, the difference is again small to begin with, so the discharge rate is also small. As it turns out, this happens to result in another sine wave.

The graph below was simulated (with a spreadsheet) with the rule mentioned above. The voltage difference between the input and the capacitor voltage is greatest a bit before the peak of the input voltage. 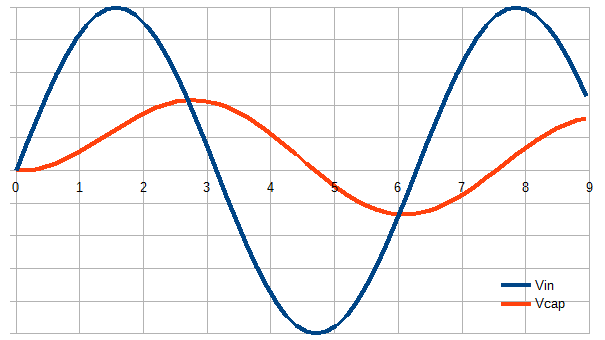 In your graph, the capacitor discharges fastest right after the two voltages meet, but that's not where the voltage difference is at its greatest. With a square-wave input, it would be, since the input voltage wouldn't change again until another "step" in the square-wave. A sine-wave input however changes constantly.

You will get a sine wave out from a sine wave in if your RC time constant allows the capacitor to charge/discharge at the same rate or faster as the input waveform changes.

Your output waveform will be delayed by the capacitor charging and discharging slightly behind the changes to the input waveform, referred to as phase lag.

You will find plenty of the theory and maths behind it on the internet, if you don't have it already.

How were schematics drawn before CAD? What is this cartridge fuse style component? Should there be any PCB ground plane under a 16 MHz oscillator? How to design wide band amplifiers? Isn't my ground different from the factory's ground? Switching HV DC relay on crashes microcontroller Purpose of a capacitor between op amp inputs in buffer circuit How to solve resistance in this circuit? What set the speed in a cassette tape recorder? How to create measurement points on a PCB for diagnostics? Simulate bad cell phone reception in the lab Do low voltage "Nixie tubes" exist?
Pandas how to find column contains a certain value Recommended way to install multiple Python versions on Ubuntu 20.04 Build super fast web scraper with Python x100 than BeautifulSoup How to convert a SQL query result to a Pandas DataFrame in Python How to write a Pandas DataFrame to a .csv file in Python