Chemistry - Why does a tetrahedral molecule like methane have a dipole moment of zero?

Karsten's answer is excellent, but here is a figure that shows the mathematics involved: 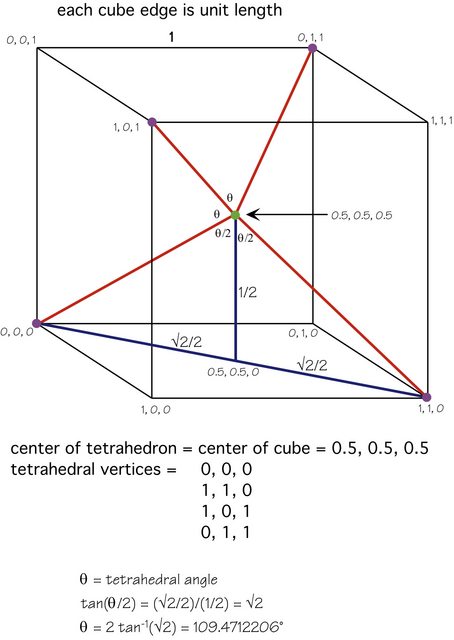 The central atom (green) is at the center of the cube, the four other atoms (purple) are at alternating vertices and the geometry should be clear.

Alternatively, if you orient the molecule so one peripheral (purple) atom is directly "above" the central (green) atom, then each of the other three atoms is just $1 - \theta$ ($\approx 70.52877940 ^\circ$) away from being directly "under" the central atom, so each contributes $\cos(1 - \theta)$ times the bond dipole. This is the downward component of the bond dipole from one of the lower atoms.

But $\cos(1 - \theta) = 1/3$, so this is simply (bond dipole)/3, and there are three of these lower atoms, so the three downward components exactly balance the one upward component.

If you like symmetry arguments, there are six mirror planes along the H-C-H planes (the left-right and the front-back are easy to see), so there can't be a dipole. The argument is as follows: If there were a dipole moment, for example left to right, and I apply the left-right mirror plane, it would have to switch directions, but the molecule is still the same. Because of this contradiction, the dipole moment has to be zero in that direction. The same argument goes for the three-fold and two-fold axis in the molecule.

Due to this the component of the bond moment of the 3 downward H atoms along the line of the upper H atom would cause a net upwards bond moment which is not equal to 0.

The upper H atom is straight up, while the downward H atoms go at an angle, with the component down being 1/3 a bond length. So in that orientation, it also cancels out, but is more difficult to believe. 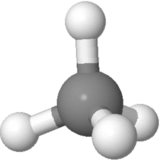 In this orientation (used for Fisher projections in sugar chemistry), you can see the symmetry nicely as well one up, one down; one left, one right; two front, two back.

Maybe my favorite: two up, two down, two left, two right, two front, two back - that is symmetric. 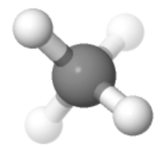 "In the beginning we saw that [methane molecules] are 3D structures with one H being at the top and other 3 at the bottom, with the bond dipole moment directed from each H towards C. Due to this the component of the bond moment of the 3 downward H atoms along the line of the upper H atom would cause a net upwards bond moment which is not equal to zero."

So what happens if you turn the molecule around so that one of the other H atoms is now at the top?

Remember that a tetrahedron is symmetric, so that it looks the same when viewed from any of its four corners. So if the tetrahedral methane molecule had a non-zero dipole moment pointing towards one of the hydrogens, by symmetry it would also have to have an equal dipole moment pointing towards all of them. But then it wouldn't be a dipole, but an octupole — a dipole can, by definition, only point in one direction.