Chemistry - Why do most explosives have symmetrical chemical structures?

The main reason to synthesize symmetric molecules are related to their synthesis:

For the keeping stability, Picric acid and its salts are famous for their disintegration products making the explosive oversensitive.

If they are symmetrical, their instability is evenly distributed over the molecule, so they are relatively stable, compared to eventual asymmetric variant, considering their explosive potential. That allows their synthesis, safe and cheap production, safe manipulation, safe aging.

If they were asymmetrical, their instability would be localized and concentrated to some molecule locations and the molecule would be much less stable.

Additionally, at big asymmetry of bigger molecules, there is question, why to keep the "non-explosive molecule part"?

Another example of an asymmetrical unstable explosive is the renowned $\ce{NI3 . NH3}$

I would summarize the answer as kinetic and thermodynamic instability, together with synthesis complexity, discriminates existence and production of asymmetric explosives, comparing to much broader group of non-explosive compounds.

Additionally, the symmetry origin is often coined in symmetry of molecules chosen to be converted to explosive, or to be the structural basis for explosive.

As their symmetry makes promise to form an efficient explosive. E.g. pentaerythritol is perfectly symmetrical alkohol with 4 OH groups to be nitrated.

Before discussing symmetrical nature of explosives, we might ask, "Why do they contain so many nitro groups?"

The answer is in estimation of energetic properties that relies on the empirically derived Kamlet and Jacobs equations 1 .

In these equations the heat released by the decomposition, the number of moles of gas produced, and the molecular weight of these gases are all critical factors. Density too is crucial. The more molecules of a high-energy material that can be packed into the limited volume of a shell or rocket the better.

E.g.: Nitrocubanes carrying five or more nitro groups contain enough oxygen to oxidize all constituent carbon and hydrogen atoms to gaseous CO, CO2, or H2O. Each of these, along with N2, "explodes" from the solid to 12 gaseous molecules. The expansion from the dense solid to a lot of gas (much expanded by the released heat) produces the desired effect in propellants and explosives.

If one examines the synthetic route, then 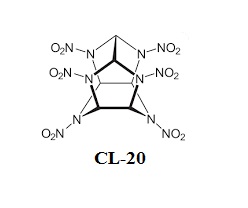 Synthetic routes used in production lead to symmetrical compounds in which more molecules of a high-energy material can be packed into the limited volume of a shell or rocket leading to greater density. For a given explosive, the detonation pressure is proportional to the square of its density.

Chemistry - Unusual oxidation numbers for alkaline earth metals? Chemistry - Reaction of borax with NaOH Chemistry - What is the IUPAC preferred name of this tetracyclic natural product? Chemistry - Elements other than carbon that can form many different compounds by bonding to themselves? Chemistry - Can the van der Waals coefficients be negative in the van der Waals equation for real gases? Chemistry - When a candle burns, why does the top of wick glow if bottom of flame is hottest? Chemistry - Storing hydrofluoric acid before the invention of plastics Chemistry - Why does the exchange interaction in Hartree-Fock theory lower the total energy? Chemistry - How does strength of boric acid solution increase in presence of salicylic acid? Chemistry - Calculating entropy change: reversible vs irreversible process Chemistry - Why doesn't H₄O²⁺ exist? Chemistry - Why is dichloromethane immiscible in water?
Pandas how to find column contains a certain value Recommended way to install multiple Python versions on Ubuntu 20.04 Build super fast web scraper with Python x100 than BeautifulSoup How to convert a SQL query result to a Pandas DataFrame in Python How to write a Pandas DataFrame to a .csv file in Python