Chemistry - Why do helium balloons expand in volume as they go higher?

I didn't know that balloons expanded during the fly because of thermodynamics, and I didn't know how high they can fly, but a rapid search tells that a partially unfilled regular balloon can fly until an altitude of around $\pu{25 km}$.

Also: while the trend of the pressure is quite logical, that of temperature is caused by complex interations (eg: sun rays that heat particles). You can find this image quite interesting: 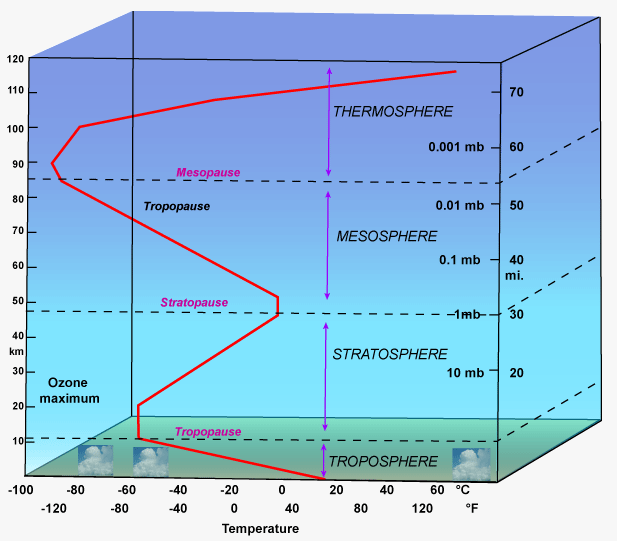 This is very similar to the process that allows convectional clouds to expand with height and the resulting thunderstorms to form. If an air mass started to rise then contract due to cooling, that would be the end of that convection event.

Thanks to the ideal gas law, the volume of the balloon doesn't really depend on the fact that the gas inside is helium in particular. So we should get the same volume if we fill the balloon with ordinary air and hoist it into the atmosphere mechanically instead of letting it rise by its own buoyancy.

If the volume of the balloon stayed the same, this would require that the atmosphere has the same density at all altitudes. But then there would need to be infinitely much of it, which is absurd in conflict with observations: It is well known that the density in space approaches zero, and since the atmosphere is not a liquid, it has no distinct upper edge, so its density must decrease gradually as we move up.

Also, if the density were the same everywhere, air at sea level would not be compressed by the weight of the atmosphere above us, which is also absurd. (Consider what happens if we compress a portion of air with a piston -- say, a bicycle pump. Both pressure and temperature will increase -- but temperature does not rise so fast that the volume will stay constant!)