Chemistry - Why can't Carbon Dioxide be liquid at 1 atm?

This is the phase diagram from a better source: 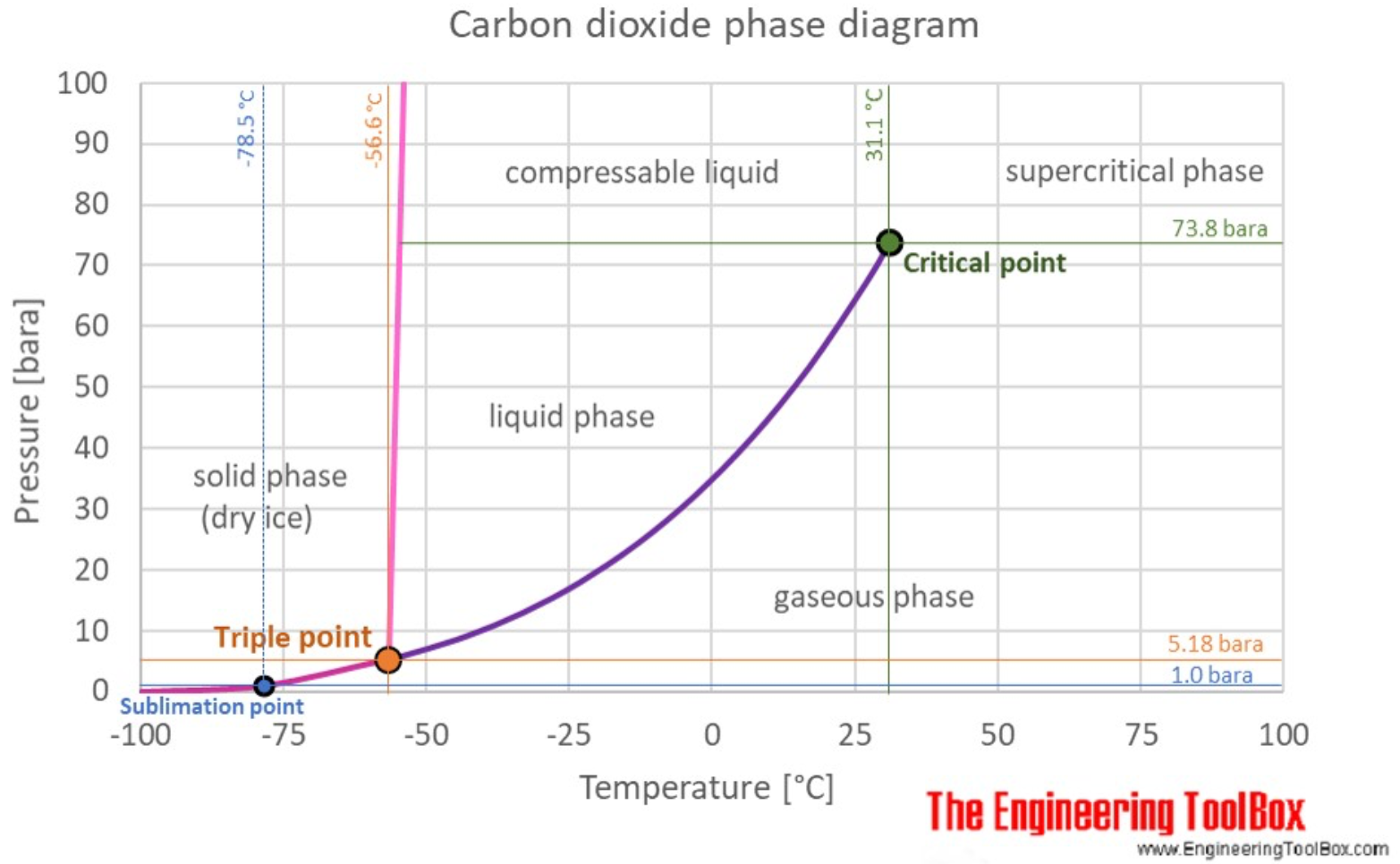 The pressure axis is the vertical one at the left. One bar (which equals 0.986923 atmospheres) is near the bottom, as shown on the diagram. So carbon dioxide is a gas at all temperatures above −78.5 °C when the pressure is one bar. Solid carbon dioxide (dry ice) sublimes at one bar (about one atmosphere), i.e., goes directly from solid to gas.

If you want liquid carbon dioxide, you need a temperature, pressure pair in the liquid region, e.g., −40.0 °C and 20 bar.

The other answer already shows that this is a solid fact. Carbon dioxide is not (actually cannot stay) liquid at 100 kPa, period.

Why that is the case is much less obvious. I cannot give you a clear, rigorous, quantitative explanation.

But the general reasoning about this and similar observations is that once the crystal structure has broken up under increasing temperature, there is very little that can keep the molecules together.

The linear CO2 molecules are unpolar from a distance, but each bond is quite polar. They have to align carefully to have enough attraction, in the solid. Now if the crystal structure breaks up, all the outer oxygen atoms see are other oxygen atoms, with a negative partial charge. So the condensed phase just blows up.

Only with a significant outside pressure, the molecules in the liquid can jump from one attractive position to another without boiling away.

Naphtalene is a similar case: The molecule is rigid and has a high aspect ratio. It needs a lot of energy to be able to move in the condensed phase at all, but once it is able to turn a bit, it looses 90% of its contact area (for vdW bonding) with its neighbours, and takes off.

Liquid water is kept together by hydrogens bonds, which can break and reform extremely fast. Nitrogen molecules don´t care how their neighbours are aligned, neither does methane or ethane. Alkanes are flexible additionally. They all can move in a liquid phase and still keep up enough interaction.

Chemistry - Reaction between copper (II)chloride and aluminium foil Chemistry - Is there a way to create natural Red food coloring from Turmeric in the house kitchen? Chemistry - Am I understanding buffering capacity against strong acid/base correctly? Chemistry - Are there other carbon free gasses that can be used for energy transport, apart from hydrogen? Chemistry - Do isotopic groups cause optical activity? Chemistry - Why isn't ΔH = TΔS in ΔG = ΔH - TΔS? Chemistry - Where do the percents in empirical formula questions come from? Chemistry - What is the difference between quantities reported as optical rotation and circular birefringence? Chemistry - Kinetic Energy Evaluation Integral Evaluation Program Ostlund Chemistry - What does it mean to 'fuse' ores and why do we use alkali metals in the process? Chemistry - How does the rate constant change with the change of the temperature? Chemistry - Why does N(OH)3 not exist?
Pandas how to find column contains a certain value Recommended way to install multiple Python versions on Ubuntu 20.04 Build super fast web scraper with Python x100 than BeautifulSoup How to convert a SQL query result to a Pandas DataFrame in Python How to write a Pandas DataFrame to a .csv file in Python