Chemistry - Why can't a reaction go to completion?

You alluded to the answer when you mention activation energy. Kinetically the equilibrium constant is $K_e = k_f/k_b$ where $k_f$ and $k_b$ are the forward are reverse reaction rate constants in the reaction $\ce{A <=> B}$. The reason that there is a finite and not zero back reaction rate constant, is that the activation barrier going B to A is not infinitely high. Quite the opposite in fact and while larger than the barrier A to B, (if the reaction is exothermic), may nevertheless be of such a magnitude that the products can return to reactants and thus an equilibrium is established. In this case molecules are continually transforming between one another. The ratio of concentrations at equilibrium is the equilibrium constant.

where $\Delta E_0$ is the difference in energy between the lowest levels of A and B.

$$K=\frac{Z_A}{Z_B}\exp(-\Delta E_0/(k_BT))$$ where Z represents the summations and are called the partition functions. This equation represents the equilibrium constant in terms of the molecules energy levels.

In classical thermodynamic terms, a plot of free energy G vs extent of reaction $\zeta$ (zeta) which ranges from 0 (entirely A) to 1 (entirely B), has a minimum at some intermediate value of $\zeta$ and this value naturally depends on the particular reaction. The minimum value is where the reaction is at equilibrium and at the minimum the slope of G vs. $\zeta$ is zero which is also when $(\partial G/\partial \zeta)_{T,P} = 0$. 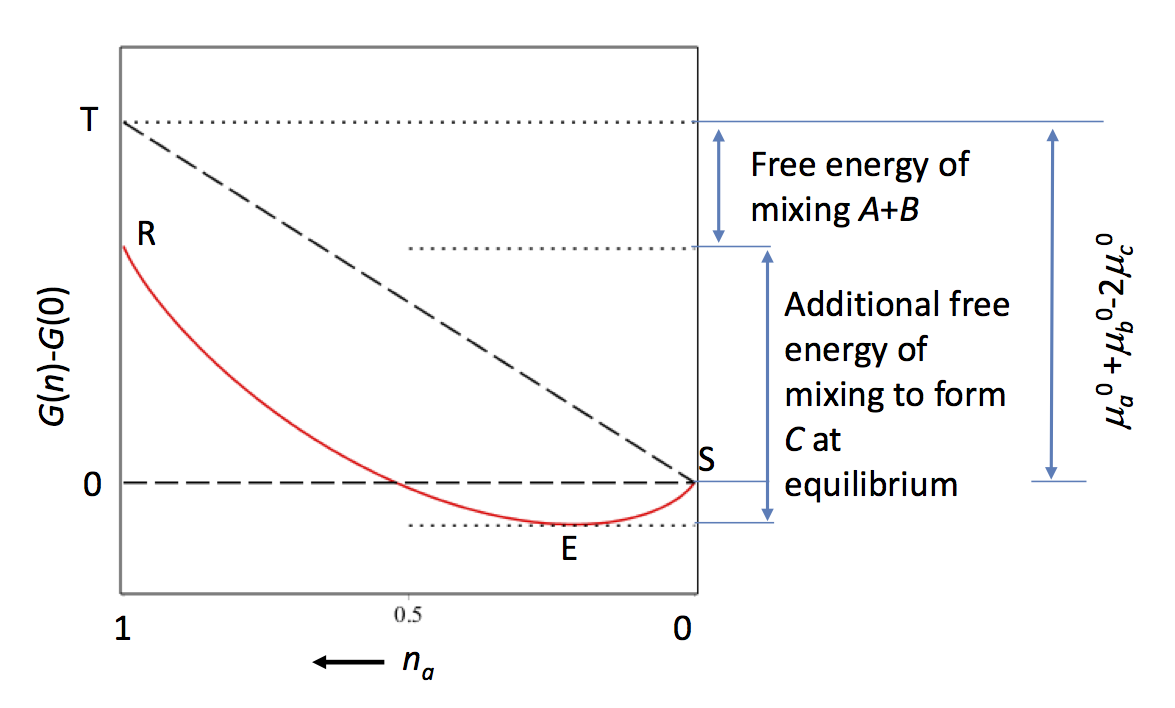 Plotting this way gives a value of zero when $n=0$, which is the condition should all reactants be converted into product, point S. The equilibrium value is at point E. The energy T-R is that due to mixing reactants and R-E that extra energy of mixing when C is formed. The dashed diagonal line is $n_a(\mu_a^0 + \mu_b^0- 2\mu_c^0)$ which is how the reaction would behave if no entropy of mixing is included.

The important point is that there is a minimum in the free energy curve because the creation of a mixture is an irreversible process and this mixing produces a decrease in free energy.

As the reaction progresses, $Q$ gets larger so $\Delta G$ becomes more positive. At some point, $\Delta G = 0$ but this happens before $Q \rightarrow \infty$.

From the viewpoint of microcanonical ensembles, the probability of a single particle being in a state with energy $E$ is proportional to $e^{-\beta E}$, with $\beta$ defined as $\frac{1}{kT}$. This means that the relative probability between two states is $e^{-\beta \Delta E}$ if the two states are separated by energy $\Delta E$. Since the difference is not infinite, there is some nonzero probability of ending up in the less preferred state.

The fundamental issue is that we have lots of relationships to describe reactions, but they happen to deal with ratios and exponentials. In the former, setting the denominator to zero creates an infinity, which we don't have. In the latter, we require the infinity to get to 0, and so we can't.

In very simplified macroscopic terms, you can think of every reaction having a forwards and backwards direction (being reversible). For some reactions, both directions are almost equally likely (e.g. reaction $(1)$) while for others the forward reaction greatly outweighs the reverse reaction (e.g. reaction $(2)$). But we can and should usually think of all reactions as reversible.

Thermodynamically, this is expressed with the equilibrium constant as shown in equation $(4)$ for reaction $(3)$.

All the explanations above are extremely simplified but in general they hold true.