You have identified a fairly common but counter-intuitive result. At least it's counter-intuitive based on the way the properties of fluorine are described in undergraduate chemistry classes. Specifically, we're told it's very electronegative and hence forms very strong hydrogen bonds, and that it is very reactive. This is, however, a poor description of what tends to dominate the behavior of fluorine when it is bonded to carbon.

First time I've used one of these :)

Additionally, the fact that $\ce{CF4}$ boils only slightly higher than $\ce{CH4}$ indicates that the molecule basically loses all interactions when going from the chlorine to the fluorine.

What does this actually illustrate? It doesn't tell us anything about hydrogen-bonding or dipole interactions (all have zero dipole), but it tells us about the dispersion forces present in the system. Namely, if this result generalizes, we have learned that a $\ce{C-F}$ bond is essentially non-polarizable. This is very important because polarization is most of what determines the strength of dispersion interactions. Okay, this basically answers the question, but let's be more systematic.

The paper you linked is basically looking for a material which won't interact strongly with water and other polar substances. One important feature is to make sure the ligands on this material do not have an appreciable dipole then. It is true that the $\ce{C-F}$ is statically polarized towards the fluorine atom, so there is a dipole along the bond, but the molecular dipole is generally what we will care about. The ligands are basically cylindrical, so any dipole perpendicular to the cylinder ought to roughly cancel out. If anything there would be a dipole along the ligand backbone, but this is probably very small if it exists at all. So, dipole interactions don't particularly matter.

Despite what you might think, it actually is quite possible for water (or other $\ce{O-H}$ containing solvents) to hydrogen-bond with the fluorine in a $\ce{C-F}$ bond. See [1] for some calculations demonstrating this.

So, if you're designing this material, you might have to worry about this a little bit, but leave it up to the experiment to tell if this matters.

Here is the key. In organic chemistry, you're usually sold a lie that the things determining the size of dispersion forces are the surface area and the molecular weight of a molecule. If this were strictly true, then we would expect the increase in boiling point we saw above going from $\ce{CH4}$ to $\ce{CF4}$ to be much more dramatic than it is based on the change going from $\ce{CCl4}$ to $\ce{CBr4}$. The reason this rule works is because generally organic compounds are just a bunch of $\ce{C-H}$ bonds, so most things are roughly as polarizable as the next thing.

Okay, but it's not like the $\ce{C-F}$ bonds are inherently unpolarizable. They are about as polarizable as a $\ce{C-H}$ bond, so for all consideration of physical interactions, we can basically imagine that these ligands are just lipids.

This is actually quite a tricky, but interesting question. Imagine a big fat lipid in a solvent of water. One thing we know is that water likes to hydrogen bond. This lipid disrupts the hydrogen-bonding network. Furthermore, because there has to be some water at the surface of the lipid, it is likely these waters will get stuck aligning their dipoles with whatever dipole is present in the bond it is near.

So, it seems like having the lipid there is both energetically unfavorable and entropically unfavorable. It is unclear without an experiment which of these things will dominate and if clumping all the lipids into a membrane is actually better because that's definitely a decrease in entropy for the lipid.

Well, [2] shows the experiment describing this same idea. Slightly different system but same idea. Basically the conclusion is that the energy plays almost no role ($\Delta H\approx 0$) but the entropy for forming a membrane dominates.

Shamelessly quoting from the abstract:

Possible mechanisms for the entropy increase include: (i) the attraction between discrete oppositely-charged areas, releasing counterions; (ii) the release of loosely-bound water molecules from the inter-membrane gap; (iii) the increased orientational freedom of previously-aligned water dipoles; and (iv) the lateral rearrangement of membrane components.

The lesson to learn here is that the entropy of the solvent can actually be very important when considering both the equilibrium arrangements of heterogeneous systems as well in chemical reactions.

So, I hope you see what I mean when I said that noticing $\ce{C-H}$ and $\ce{C-F}$ bonds have almost identical intermolecular forces behave basically answers the question.

When we consider explicitly the interactions of a substance with the ligands you have asked about (in comparison to a lipid), we see that dipole interactions might be a little stronger between the solvent and the ligand, but the ligand-ligand interactions should also be a bit stronger than in the lipid. So, again, $\Delta H\approx 0$. In contrast, the stronger dipole means that the solvent is more tied up, so the entropy change should increase (not accounting for the effect of the cube thing the ligands are mounted on).

Note that this argument for membrane formation based on entropy is not exclusive to strongly polar solvents such as water. That is, pretty much any solvent gains a lot of entropy when a membrane forms. So, as long as it does not interact strongly the ligand, the ligands should form a membrane.

Finally, based on what I've said, why not just use $\ce{C-H}$ bonds rather than have fluorine present? I only skimmed the paper, and they mention durability which makes sense because a $\ce{C-F}$ bond is much stronger than a $\ce{C-H}$ bond. Plus alkanes have the problem of being very combustible which is probably not good as these materials would likely be used at high temperatures.

Random semi-relevant note. Teflon is just an alkane but with all $\ce{C-F}$ bonds, and it too is quite slippery (it's the stuff on non-stick pans).

$\textbf{Edits:}$ I forgot to address the oleophobic nature of fluorocarbons, which is the most important part of the question, really.

It seems, however, that the oleophobicity of this particular structure has a lot to do with the fact that the chains are not free to move about in solution. For instance in [3], the authors show that by attaching a fluorocarbon, which is ordinarily not oleophobic, to silica particles, the flurocarbon becomes oleophobic. This indicates to me (and this could be argued) that by restricting the translational motion of the fluorocarbons by mounting them on a large structure, as is done in the example you give, that the favorability of mixing is lost. This assumes that the energetics of having the fluorocarbons dispersed throughout the oil is roughly the same as having the fluorocarbons and oil separated into phases.

So, it seems like entropy is the dominant factor in both the hydrophobic and oleophobic characteristics of these fluorocarbons. The big difference is that basically any nonpolar organic molecule will form its own phase in the presence of a polar solvent like water. This is because the interactions between the polar substances are fairly strong, but there is also still a lot of free motion (hydrogen-bonds, etc. break and form again quite often). With the fluorocarbon, one has to manually restrict the entropy gain due to mixing by forcing the fluorocarbons onto a silica base. These things individually have the same effect of disrupting some of the degrees of freedom of the solvent, so the two separate to maximize entropy.

Obviously, some of the parts about oleophobicity are a little bit hand-wavy because really either effect could dominate, but the fact that putting it on the silica base makes the fluorocarbon oleophobic as ref. 3 points out convinces me this is due to entropy and not enthalpy.

First it would help to define a term, surface energy: that is the energy that is required to create a surface per a given area. All surfaces have surface energy. This idea can be tied to Gibbs free energy of a system. Here's a quote from the wikipedia:

J.W. Gibbs developed the thermodynamic theory of capillarity based on the idea of surfaces of discontinuity. He introduced and studied thermodynamics of two-dimensional objects – surfaces. These surfaces have area, mass, entropy, energy and free energy. As stated above, the mechanical work needed to increase a surface area A is $\ce{dW = γ dA}$. Hence at constant temperature and pressure, surface tension equals Gibbs free energy per surface area:

where G is Gibbs free energy and A is the area. γ is the surface energy

From this it is easy to understand why decreasing the surface area of a mass of liquid is always spontaneous (G < 0), provided it is not coupled to any other energy changes. It follows that in order to increase surface area, a certain amount of energy must be added.

So what they're getting at here is that it's always favorable for a liquid to take a spherical shape, unless if energy is added into a system. Now, surface energy is this added energy in the system.

Now with fluoroalkyl chains such as the material I gave an example of, they are an example of extremely low energy surfaces. So even if oils, which are low surface energy, try to wet these surfaces, it would raise the total surface energy of the system, which is energetically unfavorable. 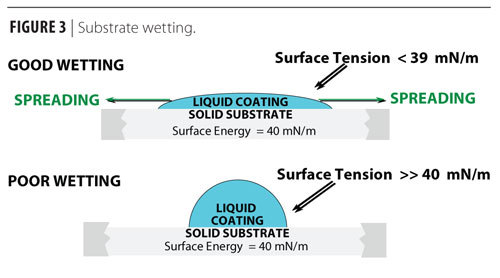