Chemistry - Which is the currently accepted mechanism of a Wittig reaction?

tl;dr: I don't think there is any mechanism that is 100% correct, and, in cases like this especially, I think it would completely depend upon what set of carbonyl/ylid/base/solvent etc. was used. But, of course, we like being able to generalise, and to my knowledge theres a lot more evidence to support a concerted type mechanism.

The question is hopefully summarised in the scheme below (no geometry, that, in itself, is a pretty lengthy discussion). Reaction of a carbonyl (in this case a ketone) with a phosphorus ylid is able to give rise to two species, either an oxaphosphetane directly or a betaine (an internal salt for the benefit of Loong) which then goes on to form the oxaphosphetane which itself is able to eliminate to afford the olefin with generation of triphenylphosphine oxide as a thermodynamic driving force.

This answer will present the case for a cycloaddition mechanism, and evidence against the betaine pathway. Importantly, only Wittig reactions of unstabilised ylids, as with stabilised ylids the rules of the game change due to reversibility of intermediate formation (see a Horner–Wadsworth–Emmons).

Evidence against the initial formation of a betaine

Betaines have never been observed during the course of a 'normal' Wittig reaction, that is, spectroscopically, we are unable to see it (this may, of course, just be due to the fact that the formation of the oxaphosphetane is so rapid relative to the timescale of the methods used).

Many reports of betaines have been from accidental (or otherwise) opening of oxaphosphetane intermediates, and indeed this seems to have been what led Wittig down the betaine pathway in the initial reports (though in the first ever paper he suggested that oxaphosphetane was the sole intermediate, but subsequently couldn't find any evidence for it back in the days before NMR etc).

Wittig[2] and others[3] reported the isolation of crystalline betaine salts. Phosphonium bromides were treated with PhLi to give a ylid, to which a carbonyl was added; subsequent addition of hydrogen bromide afforded crystalline solids which were able to be elucidated, proving the formation of a betaine.

Whilst this was convincing at the time, we now know that the betaine isn't observed, but rather the oxaphosphetane is. Vedejs (whom we'll come back to), has gone on to show that the earlier findings could be explained by quenching of the oxaphosphetane rather than as a result of directly trapping the betaine[4], which is more consistent with the other data available to us.

Scheme 1: Generation of the crystalline betaine derivative from the oxaphosphetane.

Stefan Berger's group at Leipzig reported a betaine stabilised by a bipyridyl group, allowing NMR data to be reported for the first time[1].

In this case, the lithium holds a chelated structure together, preventing it from forming the alkene (and also to a certain extent preventing reformation of the oxaphosphetane on steric grounds). Interesting, with addition of 18-crown-6 to sequester the lithium, the reaction proceeded normally in the forward direction with alkene signals observed.

The fact Berger was able to do this, does of course not imply that they are real intermediates along the Wittig pathway, but it was a nice piece of mechanistic work that I thought deserved mention.

In addition to this mechanistic work, there are some empirical issues with invoking a betaine intermediate that cannot be easily explained. Namely, all Wittig reactions using non-stabilised ylids should be under kinetic control and irreversible (hence highly (Z)-selective due to the inability of the initial intermediates to reverse and hence equilibrate to the thermodynamic product), however this is frequently observed not to be the case, and in certain cases, high (E)-selectivity can be achieved.

Vedejs was the one of the first to propose direct (irreversible) cycloaddition of the ylid and carbonyl to give rise to the oxaphosphetane, quickly followed by cycloreversion to form the desired alkene and a phosphine oxide. 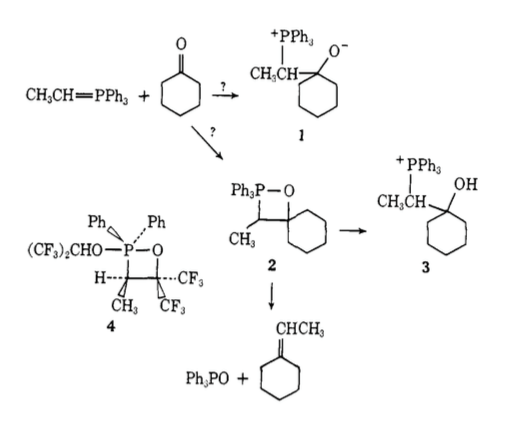 This NMR analysis isn't really too convincing by itself, however in the scheme above, compound 4 had previously been characterised by X-ray crystallography[6] and various NMR methods and as such gave some weight to the species observed by Vedejs being similar to the known compound. More recent work[7] has also observed directly the cis/trans oxaphosphetanes formed via competing cycloadditions.

Overall, direct observation of the oxaphosphetane but not the betaine does seem to suggest that mechanistically the cyclic intermediate is formed directly rather than via the betaine closing.

As stated previously, we can't 100% rule out the possibility that the betaine closure is just sufficiently rapid to appear invisible to our currently spectroscopic methods however every report of isolated/observed betaines that I've came across thus far has either intentionally been formed from an oxaphosphetane or can be explained by this without the authors recognising it.

One thing that is hugely missing from the story is computational work, whilst some studies have calculated the relative energies of the two intermediates, to my knowledge, the entire reaction coordinate hasn't been fully explored.

In conclusion, I think the cycloaddition mechanism is safest, and indeed it was the one I was taught as an undergraduate (and the one I know several other leading universities use), so if in doubt i'd go for that explanation, but on the firm understanding that more mechanistic work is needed.

[1] Neumann, R. A.; Berger, S. Observation of a Betaine Lithium Salt Adduct During the Course of a Wittig Reaction. Eur. J. Org. Chem. 1998, 6, 1085. Subramanyam had reported similar chemistry earlier, but the NMR data was incomplete.

The Wittig reaction has been known for decades, but research into its mechanism has continued to throw up surprises even until now. The literature is unfortunately very difficult to read, as numerous hypotheses have been proposed, each having subtle but important differences.

Historically, betaines were postulated as the main intermediates in the Wittig reaction, and supposedly underwent fast cyclisation and decomposition to give the products. This was likely mainly because betaines were detected under certain Wittig conditions, e.g. the presence of lithium salts led to the formation of lithium betaines. (Generally, our mechanistic understanding of lithium Wittig reactions is poorer, and for this reason the scope of this answer will be restricted to "salt-free" Wittig reactions.)

However, Vedejs' positive observations of oxaphosphetanes via 31P NMR1,2 (described in NotEvans's answer) is generally credited with changing chemists' viewpoints. Since then, the formation of an oxaphosphetane, and its subsequent cycloreversion to form the products, was not really the main point of contention. The issue was whether the oxaphosphetane is directly formed from the products, or whether it involves the intermediacy of the betaine:

Without going into too much detail about transition states and stereoselectivity issues, the general consensus is that for such reactions, oxaphosphetane formation is concerted and does not involve the intermediacy of a betaine. This applies to unstabilised, semi-stabilised, and stabilised phosphonium ylids alike.3

The observation of oxaphosphetanes alone cannot rule out the intermediacy of a betaine. It is possible to make betaines via the deprotonation of β-hydroxyphosphonium salts (the conjugate acid of the betaine), and it turns out that only oxaphosphetanes or products (alkene + Ph3PO) were detectable;4,5 so the cyclisation of the betaine is too fast for NMR investigation. As such, Vedejs' lack of observation of the betaine does not necessarily mean that it is not an intermediate (although it certainly rules out the possibility that it is a key intermediate, as was held for many decades).

Actual objections to the intermediacy of betaines were based upon a number of facts, including but not limited to:

One way to definitively prove the non-existence of betaines along the reaction coordinate would be to separately prepare the betaine by deprotonation of a β-hydroxyphosphonium salt and to investigate whether the product distribution was the same as that of the corresponding Wittig reaction.

However, one cannot use the alkene geometry as the evidence. The betaine mechanism was postulated to proceed via an open transition state (similar to a Mukaiyama aldol with BF3), which preferentially led to the (Z)-alkene. The formation of the (E)-alkene was said to arise from thermodynamically-driven interconversion of the erythro and threo betaine diastereomers. In order to compare the stereoselectivities, one would therefore have to synthesise a precise mixture of the two diastereomers.

A conclusive piece of evidence finally came from Vedejs' investigation of stereochemistry – not that of the product, but that of the intermediate oxaphosphetane.10 The idea behind the experiment was that if the substituents on phosphorus were not all the same, then there would be diastereomeric oxaphosphetanes 4 through 6 formed (all compounds are racemic). The beauty is that, since the phosphorus ylid 1 has a symmetrically substituted carbon, there is only one possible betaine that can be formed (3):

With ordinary substituted aryl groups, this experiment was impossible because the oxaphosphetanes 4 through 6 underwent rapid pseudorotation and interconversion. However, using the dibenzophosphole ylid 7 (shown below) made pseudorotation sufficiently slow on the laboratory timescale ($t_{1/2} = \pu{3 h}$ at -78 °C), and also eliminated the possible rotamer 6 which suffers from excessive ring strain. The requisite betaine 11 was actually formed by quenching the oxaphosphetane with acid (forming the β-hydroxyphosphonium salt 10, which can then be deprotonated again):

The diastereomers 8 and 9 were characterised by NMR studies. As might be expected, the ratios were vastly different. When starting from the ylid and carbonyl, the ratio of 8 to 9 was $6.5 : 1$, but when the β-hydroxyphosphonium salt 10 was deprotonated to form the betaine 11, the ratio was $1 : 4.2$. These results entirely disprove the intermediacy of a betaine. In Vedejs' words:

A more recent DFT study by Harvey and Aggarwal – who, by the way, also put forth the currently accepted origin of (E)-selectivity with stabilised ylids11 – took into account solvation effects, which were expected to be significant in influencing the mechanism of a polar reaction. The work encompassed unstabilised, semi-stabilised, and stabilised ylids.12 They found that the mechanism was best described as (I simply quote as I can't summarise it any better):

Additional evidence that fully supports the concerted oxaphosphetane formation involves the increased (Z)-selectivity observed when aldehydes with β-heteroatoms undergo Wittig reactions.13 This is observed, again, for all three types of ylids (unstabilised, semi-stabilised, and stabilised), and is best rationalised by a secondary orbital interaction in the puckered transition state:

The authors did not investigate the possibility of rationalising this using a betaine mechanism. However, as far as I can personally tell, in the putative transition state leading to the betaine, there is no obvious way of explaining this. This does not prove, but is best explained by, and hence strongly points towards, the concerted and irreversible formation of an oxaphosphetane as the key step of the mechanism for all ylid types.

Beyond the question of concerted vs stepwise, there are also many details of the mechanism that have been elucidated over the years, most notably the reversibility of the process and the reasons behind the different stereoselectivities of stabilised and unstabilised ylids. Excellent summaries are provided in refs 12 and 13; Comprehensive Organic Synthesis II, chapter 1–15 also has an overview of recent research.