Chemistry - Where does the potential energy of capillary action come from?

Where does this potential energy of capillary action come from, or is this an exception or something?

First, the laws of thermodynamics still apply. Second, you have to account for the energy balance when you go from dry to wet on the one hand, and continuous flow on the other hand.

As an aside, it does not take much work to lift a water molecule up a tree (1.8 J/mol for a 10 m tree). Hydrolysis of a single ATP affords about 50 kJ/mol under physiological conditions, so it is sufficient to get 25,000 water molecules up the tree.Gravity is weak compared to electromagnetic interactions, which dominate in chemistry.

I believe The Young-Dupre equation describes this. You could rationalize the climb of the liquid as being caused by the release of energy that is associated with a phenomenon known as wetting (see image). 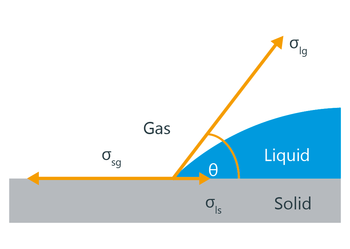 You can relate the wetting angle of a droplet on a solid material to the surface energies of the different interfaces (gas-liquid, liquid solid, and solid-gas). These energies (labeled as sigmas) are listed as energies per unit area. This means that for every unit of area I increase the droplet by, I have to decrease the other areas by a similar amount.

This often releases some energy (from the newly wetted solid-liquid area and the increase in liquid-gas area), but it costs some amount of energy to disrupt the solid-gas interaction too. We balance these energy factors with terms of sigma × the respective area.

Now, if we want to get an idea as to whether a droplet will climb, we can look at the droplet's wetting behavior. If the droplet wets the solid (say water and paper) with an angle less than 90 degrees, then we can conclude that wetting is favorable.

Accordingly, favorable wetting releases an amount of energy (usually as heat, usually small). However if the liquid must climb up the walls of a tube in order continue to wet, it can do so spontaneously, to a point. I am personally not sure what that point is, but surely involves balancing the surface energies and their respective areas, given some knowledge about the geometry of the surfaces.

To answer your question explicitly though, the source of that increased potential energy comes from the energy released upon wetting.

None of the answers answer your question, they just layout equations of how to calculate the force/energy. To understand where the force comes from, you have to understand a surface conceptually. Think of the energy input required to make a surface (break something). It takes energy input to break the bonds between atoms to make a surface, thus a surface has an inherent energy. In fact image breaking the object in pieces until you only had atoms. Think: how much energy would that take? If we recognize that bunch of unbonded atoms are in a gas state, then we can know that this energy is the same as the heat of sublimation. Unless your material is a gas at equilibrium conditions, it will want to reduce surface area to release the energy inputed to break apart the material. This is why water in space forms a sphere, it is trying to minimize energy which means minimizing the amount of surface.

Now consider a solid-liquid interface. If the surface energy (enthalpy of sublimation) is higher for the solid than the liquid, then when the liquid covers the solid energy is released by the destruction of the solid-gas (or solid-vacuum) interface, but some of that energy must go into creating more surface area of the liquid-gas interface. This will cause the liquid to sprawl out and is referred to as wetting. If the surface energy of the solid is less than the liquid, then energy will be released by breaking the solid-liquid interface which will cause the liquid to contract forming a bead which is non-wetting behavior (a very creative term).

Chemistry - Which atom bears the negative charge in cyanide? I am confused by the MO diagram Chemistry - Shea Stearin Extraction by Dry Fractionation Chemistry - How can an electron shield another electron of the same subshell? Chemistry - Why is graphite brittle? Chemistry - Is there any electronic component to water conductivity? Chemistry - Decrease in temperature of an aqueous salt solution decreases conductivity Chemistry - Why total heat of hydrogenation of 1,3-cyclohexadiene is more than that of benzene? Chemistry - Largest alkane having a given alkane as its base name Chemistry - Does a neutral dimercury molecule exist? Chemistry - Why does graphite have a high melting point even though its intermolecular forces are weak? Chemistry - Complex organic molecules Chemistry - Superscript and subscript together after the same atom
Pandas how to find column contains a certain value Recommended way to install multiple Python versions on Ubuntu 20.04 Build super fast web scraper with Python x100 than BeautifulSoup How to convert a SQL query result to a Pandas DataFrame in Python How to write a Pandas DataFrame to a .csv file in Python