Chemistry - When are two orbitals orthogonal?

Unfortunately, the sense in which orbitals are orthogonal is more or less impossible to define rigorously without recourse to functions of some kind. So, I'll give an explanation a shot using some simple, 1-D functions to illustrate the concept, followed by the pictorial orbital example you've asked for.

At a basic level, in order to have any two functions be orthogonal, you need to define a "mixing rule" for them. The most useful mixing rule for orbitals turns out to be integrating the product of the two functions$^\dagger$ over some defined domain.

A pretty standard example of two orthogonal functions in this framework would be the following:

The integral to check from the above is:

Since this is Stack Exchange and not a math exam, I will now cheat and just link to Wolfram Alpha to demonstrate that the above integral is, indeed, zero. Thus, on the domain $x=[0,1]$, $\sin(2\pi x)$ and $\cos(2\pi x)$ are orthogonal.

Similarly, the original two functions are not orthogonal on the interval $x=[0.2,0.9]$:

Ok, enough with the math lesson. How does this help define orthogonal orbitals?

Well, orbitals, both atomic and molecular, are (usually) defined just as as 3-D functions over all space. If you have two orbitals $\phi\!\left(\vec r\right)$ and $\psi\!\left(\vec r\right)$ and want to know if they're orthogonal, you use a mixing rule somewhat similar to $\Pi$ above and calculate the appropriate integral. If the resulting value is zero, then the orbitals are orthogonal.

For example, consider a $1\mathrm s$ and a $2\mathrm p$ orbital (yes, these are atomic orbitals, but the principle holds for molecular orbitals, too):

Here, the colors of the two lobes of the $2\mathrm p$ orbital are important: one color, say orange, represents positive function values; the other, say blue, represents negative values. For the $1\mathrm s$ orbital, though, it's all orange, or all positive).

Epilogue: So, given all of this, why do we also say that vectors that are $90^\circ$ from one another are orthogonal?

Well, it just involves a different mixing rule (the domain is implicit, deriving from the dimensionality of the two vectors, which must be the same):

Note: In theory, I could have just linked to this question on Math.SE. However, none of the answers there were really couched in suitably readable terms.

$^\dagger$ Technically, integrating the product of one function with the complex conjugate of the other: $\int_a^b{f^*(x)g(x)\,dx}$ 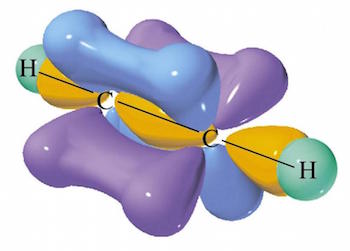 By the same token the two p orbitals on one of the carbons are also orthogonal to each other. The electron in one p orbital does not interact with the electron in the other p orbital on the same carbon.

In ethylene the pi bond is orthogonal (perpendicular) to the sigma skeleton as shown in the figure below. Since the orbitals are orthogonal there is no interaction between the sigma and pi electrons (wavefunctions). 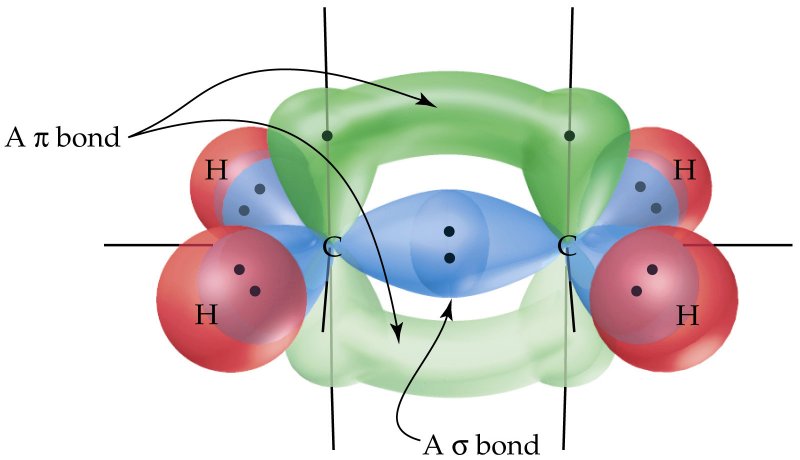 I wonder if you truly do mean molecular orbitals. Let's start with atomic orbitals. We model an isolated atom as having three P orbitals, each a "dumb bell" oriented along one of three perpendicular axes (x, Y and z if you like). There are other orbitals of course, such as s and possibly d, and other shells which have the same types of orbitals but with different sizes and numbers of nodes. But focusing on the three perpendicular p-orbitals (which I'm sure you've seen an image of), I hope you can see why we call them orthogonal. They don't overlap, and electrons in different p-orbitals essentially don't interact for our purposes.

Now, the spherical s-orbital sitting in the center of those p's doesn't seem "perpendicular" to them; but nonetheless, the s does not interact with the p's. So we say the s-orbital is orthogonal to the p-orbitals, just as the p's are to each other. Orthogonal here means more than just perpendicular in space, it also refers to the mathematical relationship of these shapes.

Molecular orbitals are formed when atomic orbitals overlap. Often we also include orbital hybridization in this model. Molecular orbitals tend to look a bit more complex than our familiar atomic orbitals, and you can't always perceive them as appearing physically perpendicular in space. However, as I hinted at, orthogonality is a more abstract property. In the proper mathematical context, we can still call these orbitals orthogonal, and it still has physical significance.

Here's a more detailed source that is probably on your level: https://www.decodedscience.org/atomic-interactions-wavefunctions-orthogonality-orbitals-hybridization-bonding/55459

(Though I must point out they might be using "molecular orbital" a bit too broadly, personally I think M.O.s like sigma and pi bonding and antibonding should be distinguished from the atomic orbitals of s, p, d, and f.)

Now, if you want to know why s-orbitals are spherical and p-orbitals are dumbbell-shaped, we're going to have to say the W word. ;)