Higher energy photons have shorter wavelengths. This means they are higher frequency. We can look at the equations, like E=h, and see directly that shorter wavelengths have more energy, but I think you're going to want a more intuitive example. Let's haul out the ropes! 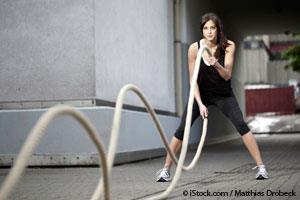 Battle ropes are an exercise tool. You try to set up waves that propagate down the ropes. If we visualize ourselves pumping these ropes, we see that if we want to create higher frequencies and shorter wavelengths, we have to put more energy into the system. We have to accelerate the ropes up and down at higher rates, and that requires more energy. This is true even if we keep the amplitude of the ropes the same.

Photons don't move up and down like this, but they do create oscillating electric and magnetic fields (which are often visualized in a form similar to battle ropes). Oscillating this field more rapidly involves more energy, in the same way as the higher frequency battle ropes did.

Like with the battle ropes, the light waves travel at the same speed, regardless of whether they are high frequency (high energy) or low frequency (low energy). The energy is seen in how rapidly the rope changes position (or the fields change strength).

All photons travel at the same speed (light speed) and carry the same spin (1). A gamma ray photon packs more punch than a radio wave photon, simply because its wavelength is much, much shorter. The formula is:

Which means as the wavelength gets smaller and smaller, the energy contained in each photon goes way up.

There is a difference in wavelength and hence frequency. The energy is given by hv where h is Plancks constant and v is the frequency. Radio waves have a relatively long wavelength whereas gamma rays are much shorter.

Do Maxwell's equations imply that still charges produce electrostatic fields and no magnetic fields? For ideal classical gasses, in terms of the energy levels why do we ignore whether the particles are fermions or bosons? Strange interference pattern of light on top of tower, pattern was seen on air. What was it? Why does gravity travel at the speed of light? What is considered a wavelength? Does Gleason's Theorem Imply Born's Rule? Double slit experiment at home failed What are the strongest objections to be made against decoherence as an explanation of "collapse?" Microcanonical ensemble, ergodicity and symmetry breaking Reason for 6π factor in Stokes' law Loss in energy by light after reflections Doubt with Relativistic Lagrangian Expression
Pandas how to find column contains a certain value Recommended way to install multiple Python versions on Ubuntu 20.04 Build super fast web scraper with Python x100 than BeautifulSoup How to convert a SQL query result to a Pandas DataFrame in Python How to write a Pandas DataFrame to a .csv file in Python