What is the basic explanation of a thermocouple?

Ok, I give a shot at a simple explanation.

Draw a "circuit" of the thermocouple attached to a voltmeter, like in the following picture. 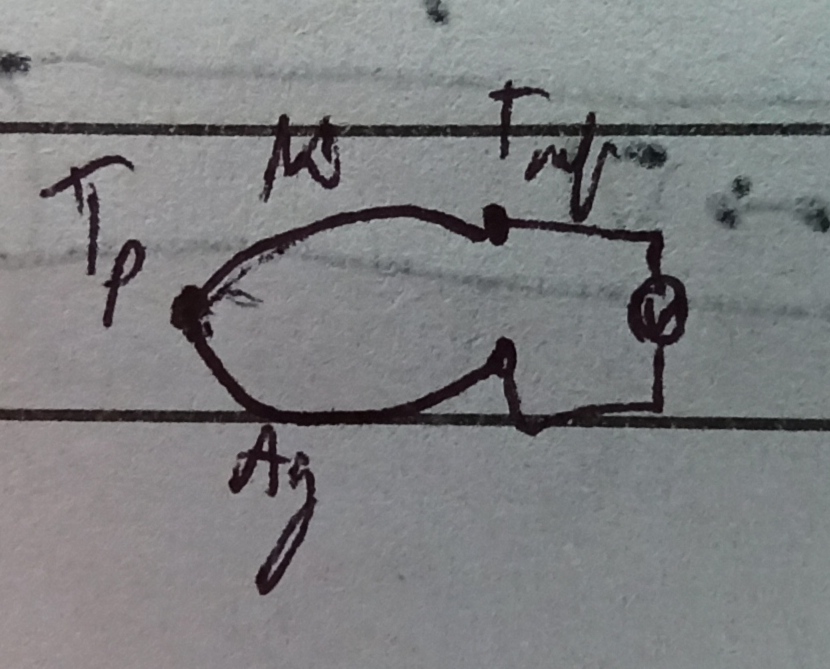 I picked $T_p$ as the probed temperature. $T_\text{ref}$ is a reference temperature, Ni stands for nickel and Ag for silver. In this particular case, the voltage read by the voltmeter is $V=S_\text{Ag}\Delta T - S_\text{Ni}\Delta T$, as long as the voltmeter's lead are of a single material (regardless of which material it is).

So a quick explanation would be that a thermocouple is a union of two materials made at a point where one seeks to probe its temperature. Thanks to the Seebeck effect, which states that a temperature difference across a material induces a voltage proportional to this temperature difference, one can arrange a simple setup where reading the voltage of the couple leads back to $T_p$ which is the goal.

The reason this works is because $T_\text{ref}$ is assumed to be known as well as the Seebeck coefficients of the two materials (in a given temperature range), hence the knowledge of $V$ yields the knowledge of $T_p$.

Responding to your comment, I will give a try that involves some physics. From Onsager theory, we have the generalized Ohm's law $\vec J_e = - \sigma \nabla \overline \mu - \sigma S \nabla T$ which tells us, amongst other things, that an electrical current can be due to both an applied voltage or a temperature difference across a given length. In the case of a thermocouple, there is no current and so $\vec J_e = \vec 0$ from which one derives the relation $d\overline \mu = - SdT$.

At any of the junctions of the materials making up the thermocouple, the conditions are isothermal and there is no current. This means that the electrochemical potential $\overline \mu$ is spatially continuous at the junctions. From this information, one gets $V = \int _{T_\text{ref}}^T (S_\text{Ag} - S_\text{Ni}) dT$ (voltage displayed by the voltmeter) which is essentially the formula I wrote above.

Now, from first principles it is in general extremely hard to explain the value of $S$ of a material. There are some formulae like Mott's one which are derived assuming a free electron model and are valid for some metals, and other formulae are valid for some semiconductors, etc. In general there is no simple explanation of the value of the Seebeck coefficient. Sometimes it is a sum of several "effects" like phonon drag for example.

Why don't we prove that functions used in physics are continuous and differentiable? Why doesn't a dimensional inconsistency arise while defining a physical quantity in multiple ways? Bertrand's theorem and nearly-circular motion in a Yukawa potential Natural motion of objects according to Einstein Can multiple Helium-4 nuclei occupy the same place because the nuclei are bosonic? Can I define a unitary representation of the Lorentz group on the Hilbert space of a theory which breaks Lorentz invariance? Do Maxwell's Equations depend upon an orientation of space? What is the point of a voltage divider if you can't drive anything with it? Are there non-constant potentials that result in eigenstates of the Hamiltonian that are all plane waves? What is tension force? How is the acceleration of all the blocks same in this problem? Trying to understand a visualization of contravariant and covariant bases
Pandas how to find column contains a certain value Recommended way to install multiple Python versions on Ubuntu 20.04 Build super fast web scraper with Python x100 than BeautifulSoup How to convert a SQL query result to a Pandas DataFrame in Python How to write a Pandas DataFrame to a .csv file in Python