What is tension force?

What we call a tension force is actually the net result of the electromagnetic forces which hold the rope together as something tries to pull it apart. At every small cross section of the rope there are forces acting perpendicular to that cross sectional area, and hence act (generally) parallel to the length of the rope. If the rope is not stretching and the weight component of the rope acting parallel to the length is small compared to the forces acting on the ends of the rope, the tension will be (nearly) constant.

And the direction of the forces which the rope exerts on things is always pulling. So, if a mass is hanging vertically in equilibrium from a single rope which is attached to some ceiling point, and its weight is large compared to the weight of the rope, the tension force which the rope exerts on the mass is up (pulling) and is equal in magnitude to the weight of the mass. The rope is also pulling down on the ceiling point with the same magnitude force, the tension.

One way (but not the only way) to think about it is tension is the magnitude with which a rope or cable can pull at any point along the length of the rope. Wherever that point is, the direction of the tension force pulls away from that point. That means that each point in the structure of the rope is in equilibrium, so it doesn't accelerate relative to other parts of the rope.

what exactly is tension force?

Tension force is just a pulling force. It always pull the other object. To be very precise, tension is a scalar quantity. Tension is like what pressure is in 3D.

Why is it just a pulling force?

I am only talking with respect to string. It is only a pulling force as in Newtonian mechanics strings are inextensible and the length of the string is constant. 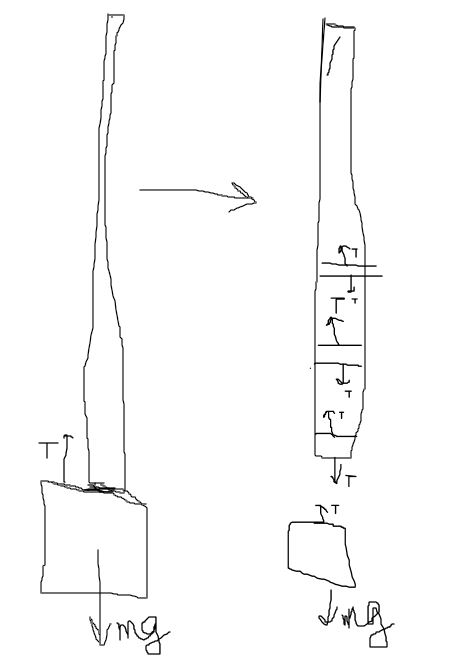 The net force on the string is 0 as it's mass-less.

All the picture credit goes to @satan29.

How is the acceleration of all the blocks same in this problem? Trying to understand a visualization of contravariant and covariant bases How does brain perceive time dilation due to gravity? Is quantum mechanics applicable to only small things? Will cutting sand paper with scissors make the scissors sharper or duller? Can someone provide a physical -- not mathematical -- intuition for the phase in a quantum wavefunction? Inverse and Transpose of Lorentz Transformation Is the statement "The deactivation sensor sends a signal to disarm the bomb" frame-independent in the train-tunnel paradox? In Maxwell's demon, why are all the cold gas molecules on the same side? What does it mean for an operator to have both a continuous and discrete spectrum? Why no gravity lens around planets? Why does a collection of radioactive atoms show predictable behaviour while a single one is highly random?
Pandas how to find column contains a certain value Recommended way to install multiple Python versions on Ubuntu 20.04 Build super fast web scraper with Python x100 than BeautifulSoup How to convert a SQL query result to a Pandas DataFrame in Python How to write a Pandas DataFrame to a .csv file in Python