Chemistry - What is a "hydrogen-like" or "hydrogenic" atom?

A hydrogen-like atom (or ion) is simply any particle with a nucleus and one electron.

That should be sufficient to answer the question at hand, but I thought I should say a bit more, as some of these answers are potentially confusing.

The physical reason, though, is because the Rydberg formula uses energy levels that only depend on the principal quantum number $n$, which has to be a positive integer:

and nowadays we know that this is only true for hydrogen-like atoms;$^*$ the energy levels of multi-electron atoms depend on both $n$ and $l$.$^\dagger$

$^*$ In fact, the energy levels of hydrogen are not only dependent on $n$ (due to various small effects such as – but not limited to – spin-orbit coupling, and hyperfine splitting). Wikipedia has a good overview of the topic here and most QM textbooks have a chapter on the hydrogen atom, where they discuss these perturbations to the Hamiltonian and their effects on the energies. Not surprisingly, the inability to explain this was one of the failures of the Bohr model.

Hydrogen-like atoms are atoms with a single electron "orbiting" a nucleus which has more than one nucleon. As @Xerxes pointed out in a comment, you can in principle have a nucleus made up of particles other than protons and neutrons (nucleons). Positronium might be an extreme example of this.

Wikipedia actually has an entry about Hydrogen-like atoms which goes somewhat beyond what you asked.

Hydrogen-like ions are ions that possess only one electron, just like a hydrogen atom.

The fact that these ions have only one ion in the outermost shell makes it simpler to analyze their radii and energies, as a simple electrostatic model can be used to describe them. Species having multiple electrons are difficult to study, and are beyond the scope of the Bohr model. This is because the inter-electronic replusions are hard to account for in electrodynamic interactions that makes up the atom's bound system.

In the spirit of notable University Of Nottingham chemist Sir Martyn Poliakoff's comment in the Periodic videos episode Helium in Disguise (also YouTube):

Again and again, for scientists, if they hear something surprising that makes them think in a different way, it’s really good.

I'll add to the other excellent answers by listing some less common hydrogen-like "atoms".

Positronium (Ps) is a system consisting of an electron and its anti-particle, a positron, bound together into an exotic atom, specifically an onium.

It has Rydberg states with $E_n \sim -(6.8eV)/n^2$ or half that of normal hydrogen, because the reduced mass is half that for an electron bound to a much heavier item. The longer-lived triplet ${}^3S_1$ state has a mean lifetime of about 142ns, and decays by electron positron annihilation into three gamma-ray photons. It is sometimes studied by slowing and stopping positrons in powdered MgO where they capture an electron and tend to remain relatively unperturbed by the other atoms.

Muonium is an exotic atom made up of an antimuon and an electron, which was discovered in 1960 and is given the chemical symbol Mu. During the muon's 2.2 µs lifetime, muonium can enter into compounds such as muonium chloride (MuCl) or sodium muonide (NaMu). Due to the mass difference between the antimuon and the electron, muonium (μ+e−) is more similar to atomic hydrogen (p+e−) than positronium (e+e−). Its Bohr radius and ionization energy are within 0.5% of hydrogen, deuterium, and tritium, and thus it can usefully be considered as an exotic light isotope of hydrogen.

True muonium or muononium is an exotic atom made up of an antimuon and a muon. It is yet to be observed, but it may have been generated in the collision of electron and positron beams.

Negative muons can, however, form muonic atoms (previously called mu-mesic atoms), by replacing an electron in ordinary atoms. Muonic hydrogen atoms are much smaller than typical hydrogen atoms because the much larger mass of the muon gives it a much more localized ground-state wavefunction than is observed for the electron.

Muonic helium is created by substituting a muon for one of the electrons in helium-4. The muon orbits much closer to the nucleus, so muonic helium can therefore be regarded like an isotope of helium whose nucleus consists of two neutrons, two protons and a muon, with a single electron outside. Colloquially, it could be called "helium 4.1", since the mass of the muon is slightly greater than 0.1 amu. Chemically, muonic helium, possessing an unpaired valence electron, can bond with other atoms, and behaves more like a hydrogen atom than an inert helium atom.

Muonic heavy hydrogen atoms with a negative muon may undergo nuclear fusion in the process of muon-catalyzed fusion, after the muon may leave the new atom to induce fusion in another hydrogen molecule. This process continues until the negative muon is trapped by a helium atom, and cannot leave until it decays. 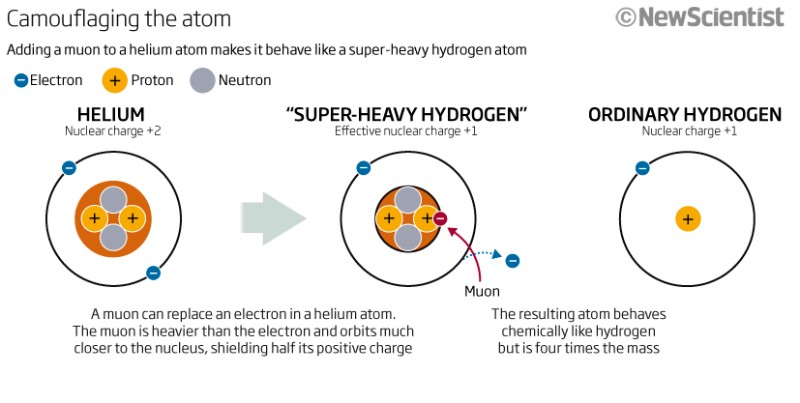 above: From New Scientist.

I think one key aspect that is overlooked in these replies is the Born-Oppenheimer approximation. The nucleus of any atom can be approximated as a point with very few relativistic correction due to its mass. An electron on the other hand is essentially massless (comparatively speaking. I know it is still a fermion and has mass). Once you put more than one electron in any orbital those relativistic corrections have consequences. So ''hydrogen-like'' means any atom that does not need Pauli or Dirac's insight to explain the deviations in the spectra i.e. the bohr model.