What does the "true" visible light spectrum look like?

Most computer monitors aren't capable of displaying any spectral color. Some of the RGB monitors could display at most three of them: some red wavelength, some green and some blue. This is because the gamut of the human vision is not triangular, instead it's curved and resembles a horseshoe: 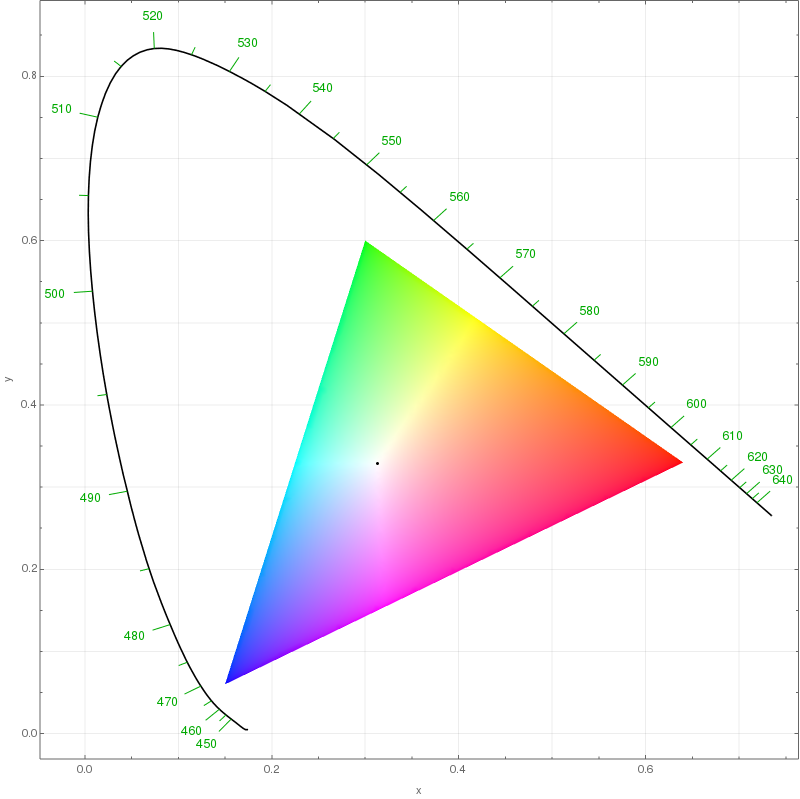 In the image above, the black curve represents the spectral colors, with the wavelengths in nm denoted by green numbers. The colored triangle is the sRGB gamut, the standard gamut that most "usual" computer monitors are supposed to have.

As you can see, the black curve doesn't even touch the triangle, which means that sRGB monitors can't display any of the corresponding colors.

This doesn't mean that you can't see any good representation of the visible spectrum. You can e.g. display what the spectrum would look like if you took a gray card and projected the spectrum onto it, thus getting a desaturated version. CIE 1931 color space, via its color matching functions, lets one find, for each spectral color, corresponding color coordinates $XYZ$, which then can be converted to the coordinates in other color spaces like the above mentioned sRGB.

The inability of the sRGB monitors to display spectral colors manifests in the fact that, after you convert $XYZ$ coordinates to sRGB's $RGB$ ones, you'll get some negative components. Of course, negative amount of light is not something a display device can emit, so it needs some workaround to display these colors (or something close to them). Displaying the spectrum as projected on a gray card is one of these workarounds.

Here's how such a desaturated spectrum (with a scale) would look: 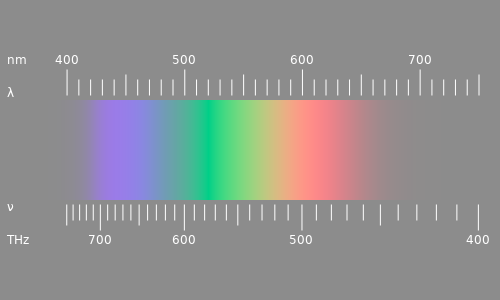 To get this (or any other, actually) image to display "correctly", ideally you need to calibrate your monitor. Some of the consumer devices have better color rendering out of the box, others have quite poor color rendering and show visibly wrong colors. If you don't calibrate, then just be aware of this nuance.

Also, if you happen to be a tetrachromat (virtually never happens in males, rare in females), then the above image will look incorrect to you in any case.

How to see an actual spectrum, without the workarounds discussed above? For this you should use not a computer monitor. Instead you need a spectroscope. These can be found in online stores like AliExpress quite cheap, some using a diffraction grating, others a prism. The ones with grating will give you almost linear expansion in wavelengths, while the ones with a prism will have wider blue-violet part and thinner orange-red part of the spectrum.

If you're really curious, buy a cheap prism, and take it outside in sunlight.

You'll be dispersing the frequencies present in sunlight, and in addition, your eyes are more or less sensitive depending on the frequency, but that's a good start for being able to see what a "real spectrum" of visible light is.

A monitor does not produce all frequencies of light, but rather tricks human perception by sending different proportions of red, green, and blue light. A color-calibrated, wide-gamut display can reproduce the effect of broad spectrum light, but it won't be the real thing.

When you look at images on your computer, you’re seeing light emitted from the LEDs (most likely) in the pixels of your screen. Those pixels generate colors by combining the output of LEDs with only a few different center wavelengths. Want purple? Mix blue and red. Want a slightly different purple? Adjust the proportions of blue and red. Your eyes and brain interpret these combinations of colors as different single colors.

The point is: Your screen is not giving you pure colors of the rainbow. It simply cannot. It’s not designed to. It’s designed to generate colors with linear combinations of other colors. Any generation of a color in the visible spectrum will be an approximation. However, one benefit of this is that your screen can generate colors which do not exist in the rainbow, like pink.

So all the images of spectra you see are different approximations of the actual spectrum you’d see if you put white light through a prism. That’s why they don’t agree. It’s impossible to find exactly what you’re looking for coming from your computer screen.

Why is it said that light can travel through empty space? Why the formula of kinetic energy assumes that the object has started from an initial velocity of zero? Do wormholes really exist? In a microwave oven, why do smaller portions heat up faster? How does Equivalence Principle imply a Curved Space-Time? What does $\exp\left( ax\frac{d}{dx} \right)$ do on $\psi(x)$? Are fundamental forces, forces or net forces? Circular orbit around a point that is not in the center A photon travels in a vacuum from A to B to C. From the point of view of the photon, are A, B, and C at the same location in space and time? Galilean transform as limit of Lorentz one Freezing water: in layers or all at once? Does special relativity imply that I can reach a star 100 light years away in less than 100 years?
Pandas how to find column contains a certain value Recommended way to install multiple Python versions on Ubuntu 20.04 Build super fast web scraper with Python x100 than BeautifulSoup How to convert a SQL query result to a Pandas DataFrame in Python How to write a Pandas DataFrame to a .csv file in Python