What does the cosmic neutrino background look like today, given that neutrinos possess mass?

As far as theory goes, the Cosmic Neutrino Background (CvB) was created within the first second after the Big Bang, when neutrinos decoupled from other matter. Nevertheless, while the universe was still hot neutrinos stayed in thermal equilibrium with photons. Neutrinos and photons shared a common temperature until the universe cooled down to a point where electrons and positrons annihilated and transfered their temperature to the photons. With the continuing expansion of the universe both the photon background and the neutrino background continued to cool down.

From these assumptions one can derive the properties of the Cosmic Neutrino Background today. The calculations are neither particularly lengthy or difficult, but I'll skip them here. As a result of these calculations one expects the CvB to have a temperature of

an average momentum of

and a density of

for each of the three neutrino flavors. This density is many orders of magnitude more abundant in that energy range than neutrinos from any other sources. This number is equally divided into neutrinos and antineutrinos.

These are rather hard predictions of Big Bang cosmology. This makes the CvB so important: if we could measure it, any deviation of these numbers cited above would mean that there is a serious and fundamental flaw in our cosmological models.

However, one has to keep in mind that all these numbers are averaged over the whole universe. Since neutrinos do have a non-zero rest mass, they are indeed affected by gravity. They cannot cluster like Dark Matter, because even though CvB Neutrinos are "slow", they are still too fast (many hundreds of km/s) to form clusters and therefore no viable Dark Matter candidate. But they may form gigantic weakly bound halos around galaxies that go far beyond the Dark Matter clusters. This may lead to a local enhancement of the CvB density due to the gravitational attraction of the massive neutrinos to large-scale structures in the universe. Unfortunately, this density enhancement cannot be quantified yet, because it depends very much on the absolute neutrino mass, which is still unknown today. For a mass of 0.1$~$eV, which you assumed in your question, there would probably be no relevant density enhancement of CvB neutrinos near our galaxy. The neutrinos would be too fast and simply stream out of the gravitational potential. If the neutrino masses turn out to be larger, on the other hand, the effect of gravity can become significant and density enhancement factors of $\approx$100 might be possible.

There would also be a "CvB neutrino wind". Just like the Cosmic Microwave Background, the neutrino background is not co-moving with our reference frame. Rather, our galaxy and the Earth are passing through the gigantic cloud of CvB neutrinos, so the neutrino distribution would not appear completely isotropic to us. It would appear a bit blue-shifted in one direction and a bit red-shifted in the other.

I would like to emphasize though, that a possible CvB detection experiment would probably not yield much information about the properties of the CvB. The only feasible method conceived to detect CvB neutrinos uses the neutrino induced $\beta$-decay of unstable nuclei. This process mainly provides us a yes/no-answer about the existence of the Cosmic Background Neutrinos. It does not tell us anything about the temperature of the CvB. In principle it would be possible to determine the density (via the rate) or even the anisotropy (via an annular rate modulation), but I doubt that it we could get anything better than the right order of magnitude. What one can determine from neutrino induced $\beta$-decay is the absolute neutrino mass. But this is not a property specific to the CvB and can be measured in other ways, too.

I just want to add something to the answers above, because I did not understand this initially.

As far as clustering goes, the crucial point is how slow the neutrinos are travelling with respect to the characteristic escape velocities of galaxies (600 km/s) and clusters (2000 km/s).

If you assume a rest mass of 0.1 eV, use the 1.95K temperature and the Maxwell-Boltzmann distribution, you get an rms speed of 21,000 km/s. But this is wrong.

The neutrinos maintain their relativistic Fermi-Dirac distribution as they cool, with much lower occupation of high energy states. The distribution does not depend on the neutrino mass. $$F(p,T) = \frac{1}{\exp(pc/kT) + 1}$$ As the universe expands, the de Broglie wavelength of particles is stretched by a factor equivalent to the scale factor of the universe $a \propto (1+z)^{-1}$. Thus the momentum $p \propto (1+z)$. The energy of relativistic particles also goes as $(1+z)$, but once neutrinos become non-relativistic (see below), their energies ($=p^2/2m_{\nu}$) fall as $(1+z)^{2}$ (see Rahvar 2006).

Neutrino masses are not fully constrained. At least two of the three flavours must have masses $0.05<m_{\nu}c^2 <2$ eV that make them non-relativistic at the current epoch. The total neutrino mass (all three flavours) is probably less than 2 eV from beta decay experiments; but some cosmological constraints using galaxy clustering data and the cosmic microwave background suggest this could be as low as $<0.5$ eV (Guisarma et al. 2013).

The following plots from Ringwald (2009) illustrate calculations of the neutrino momentum spectrum and the consequent way those neutrinos will be clustered in our Milky Way galaxy as a function of radius, for several possible neutrino rest masses. There is not much effect until neutrino masses exceed 0.1 eV and their average speed becomes comparable to the escape velocity of the Galaxy. Above this, then the local neutrino density becomes very significantly larger than the average of 56 cm$^{-3}$ per neutrino flavour.

You can also see from the upper plot that the momentum distribution is characteristic of a partially degenerate fermion gas, that becomes more degenerate as the neutrinos become more massive and more clustered. 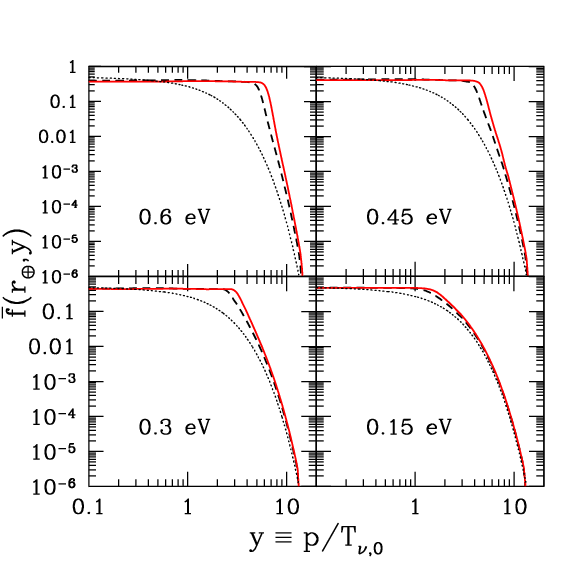 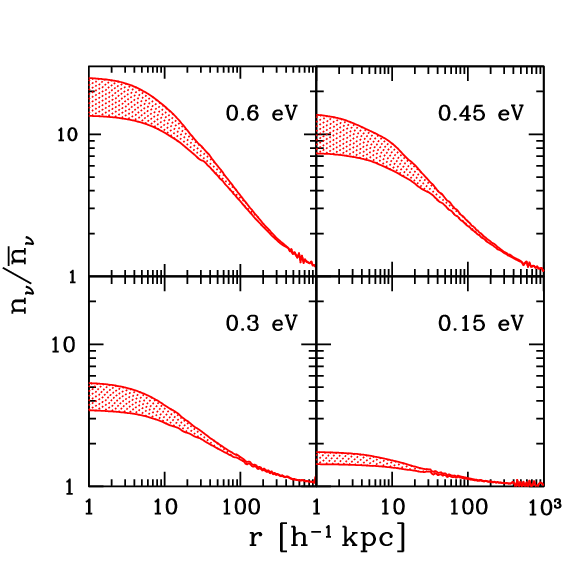 A bigger annual modulation would be caused by gravitational focusing (Safdi et al. 2014) by the Sun and also depends upon whether the neutrinos are bound to the Galaxy or not. The Earth is bathed in a higher relic neutrino density when it is "downwind" of the Sun. Bound neutrinos are expected to be orbiting in the Galactic potential and the Sun moves through these at a speed of $\sim 220$ km/s. Considering the inclination of the ecliptic plane to the Galactic plane, it turns out the focusing effect is maximised in March, with an amplitude of a few tenths of a percent. If the neutrinos are less massive and unbound, then the Sun's motion of 370 km/s with respect to the comoving rest frame defines the wind direction, and the orbital geometry means that the modulation would be maximised in September, with an amplitude that is quite dependent on the neutrino mass, but could be as high as 1 percent for a 0.35 eV rest mass.

Your post reminds me of this paper by Wigmans (also via arXiv) which I learned about during a colloquium in the distant past. Wigmans points out a narrow and interesting region in the parameter space for neutrinos in the mass region 0.1-1 eV. A longer paper (arXiv) by the same author; you'll enjoy mining citations.

Such neutrinos, redshifted to the CνB temperature of 1.9 K, would have typical speeds of under 100 km/s, slower than the escape velocity of some stars. Cold neutrinos might therefore accumulate in gravitational wells, resulting in substantial density enhancement over the 100 ν/cm³ average you expect over intergalactic space. If this cold neutrino density enhancement occurs near neutron stars, which serve as the local source of cosmic rays above the GZK limit, there should be a "knee" and an "ankle" in the cosmic ray spectrum which depends on the ratio of protons to alpha particles and heavier nuclei. Those features are confirmed by other high-energy cosmic ray observatories.

(I'm just the tiniest bit murky on how the cold neutrinos get trapped without scattering, but I'm prepared to believe it's discussed in the literature.)

Neutrino masses higher than 2 eV are ruled out by previous studies of the tritium β-decay spectrum, and Wigmans's mass range is within the proposed sensitivity of KATRIN. (Note that 0.5 eV is much larger than the neutrino mass splitting observed via flavor mixing, so it doesn't matter whether the mass hierarchy is "normal" or "inverted.") If the neutrino mass is much lower than 0.1 eV, then the neutrinos are too fast for gravitational binding except on the galactic scale.

Note also that, just as a degenerate electron gas has a lower number density than a degenerate neutron gas as the same temperature, due to Heisenberg relation $\Delta x \Delta p \gtrsim \hbar$ between momentum and size, a cold gas of massive neutrinos becomes degenerate at very low number densities. This estimate seems to suggest that for zero-temperature neutrinos with mass 0.1 eV, Pauli blocking means that there will always be neutrinos with enough speed to escape from the Milky Way galaxy, forbidding any smaller-scale clustering. If neutrinos are light enough, you probably live in a degenerate gas of relic Big-Bang neutrinos.

Why is a wave pulse a superposition of sine waves? $\pi, ~\sigma$ - atomic transitions with respect to a quantization axis Is there an electric field around neutral atoms? If particles are points, then aren't atoms empty space? How to show mathematically that the electric field inside a conductor is zero? Is it possible that all "spontaneous nuclear decay" is actually "slow neutrino" induced? Why is the vibration in my wire acting so oddly? Do massless particles really exist? What's the definition of distance in curved space-time in general relativity? Why can't a nucleus become a black hole? How did physicists know that only negative charges move? Where are all the slow neutrinos?
Pandas how to find column contains a certain value Recommended way to install multiple Python versions on Ubuntu 20.04 Build super fast web scraper with Python x100 than BeautifulSoup How to convert a SQL query result to a Pandas DataFrame in Python How to write a Pandas DataFrame to a .csv file in Python