Chemistry - What does the circle inscribed in a benzene ring represent?

The circle, if anything, represents the inability of our everyday physical intuition to cope with the quantum phenomena. See, you would often encounter those two pictures with "double bonds this way" and "double bonds that way", intended to give a vague impression that the molecule switches quickly between the two, but that's not true.

It does not switch; it just stays there, in some sense "halfway between" these structures. There is no movement of double bonds, and in fact there are no double bonds. (Also, there is no movement of electrons either. They just sit there on their molecular orbitals, which by itself is an approximation, though a pretty decent one). All $\ce{C-C}$ bonds in benzene are the same; they are neither double nor ordinary. Read the Wikipedia page on aromaticity, or just look at this picture from it: 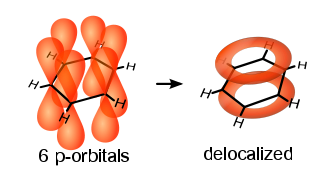 That's what the circle stands for.

Do any single one of them actually represent benzene? No! If it did, then the $\ce{C-C}$ bond lengths would differ from each other. In reality, it is observed that all the bond lengths are equal.

An electron is described by the wavefunction $\psi$ where $$\psi(x)\equiv \langle x|\psi\rangle= \textrm{probability amplitude of finding the electron at} \, x;$$

Also, from the First Principles of Quantum Mechanics:

Consider hydrochloric acid. How can it be represented by Lewis structure?

However, we know that $\ce{HCl}$ is neither 100% ionic nor 100% covalent. To properly describe the wavefunction of $\ce{HCl}$, quantum superposition is applied viz.

A better description of the wavefunction for the molecule is a superposition of the covalent & ionic descriptions, & we write (with a slightly simplified notation) $$\psi= \psi_{\ce{H-Cl}} + \lambda\psi_{\ce{H^+ Cl^-}}$$ with $\lambda$ some numerical coefficient. In general, we write $$\psi = \psi_\text{covalent} + \lambda \psi_\text{ionic}$$ [...]According to the general rules of quantum mechanics, in which probabilities are related to squares of wavefunctions, we interpret the square of $\lambda$ as the relative proportion of the ionic contribution. If $\lambda^2$ is very small, the covalent description is dominant. If $\lambda^2$ is very large, the ionic description is dominant.$^{\ddagger}$

Resonance is nothing but quantum 'superposition of the wavefunctions representing different electron distributions in the same nuclear framework.'

In the same way, we can describe benzene as the following (un-normalised) wavefunction :

Remember, the wavefunction on the left is real and all in the right are fictitious.

Molecular orbitals are one-electron wavefunctions which are formed due to linear combination of atomic or hybrid orbitals. Unlike in VBT where bonding occurs due to the coupling between atomic orbitals of the participating atoms and thus remain localised between those two atoms, in MOT, all atomic orbitals apart from those two atoms participate in the combination and thus the MOs are spread over all the nuclei of the molecules.

Delocalisation is thus inherent in the approach of MOT. The bonding influence of a single electron pair is spread over the entire molecule and not just the adjacent participating atoms of the molecule.

Now, let's come to the case of benzene.

All the unhybridised p orbitals of $\ce{C}$ atoms in $\ce{C6H6}$ combine to form MO. Since there are six such orbitals, six MOs would be formed.

The (un-normalised) wavefunction thus can be written as:

Three bonding MOs and three antibonding MOs are formed; the former being lower in energy: 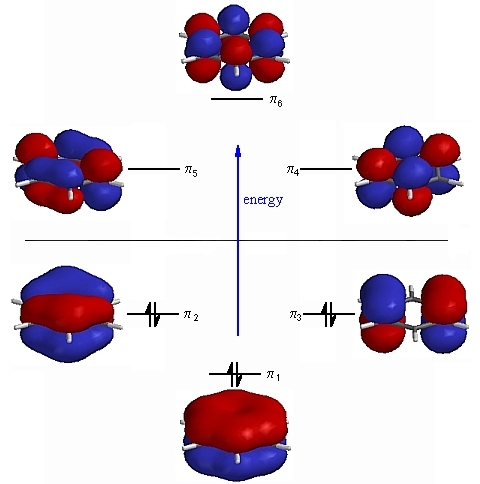 There are two pairs of degenerate orbitals; one is lower in energy while the other is in higher level. The electrons occupy the MOs of lower energy level.

Each MO is spread either all around, or partially around, the $\ce{C6}$ ring which corresponds to delocalised $\pi$ bonding. Thus, each electron pair helps in binding together several of the $\ce C$ atoms.

But the crux of the point is, the bonded electron pairs never remain confined or localised between two participating atoms; it spreads over the whole molecule; it delocalises.

The circle in that structure you mentioned represents this delocalisation of $\pi$ bond over the entire ring.