Chemistry - What causes the really bad smell of rotten potatoes?

My first guess was that it was putrescine and other polyamines---but the smell of putrefying potatoes actually comes from methyl mercaptan, dimethyl sulfide, and dimethyl trisulfide. Check it: 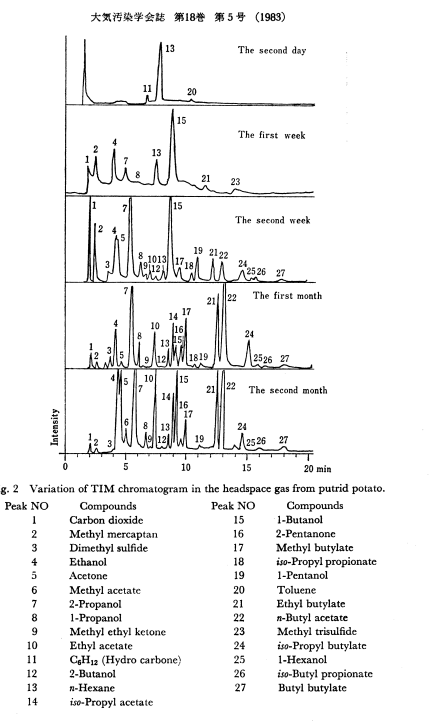 Notice that the headspace composition changes quite a bit with time. Most of the headspace chromatography studies I found dealt with early detection of disease organisms in infected potatoes, rather than potatoes in full putrefaction mode. You'll also find many references to solanine poisoning from potatoes; solanine is a toxic glycoalkaloid, is nonvolatile, and has nothing at all to do with the foul smell and toxic gas produced by putrid potatoes.

Methyl mercaptan ($\rm CH_3SH$) has an odor described as "rotting cabbage" by ATDSR; it's one of the major contributors to the smell of farts (oh, sorry, "flatus" if we're being polite). It has an odor detection threshold as low as 1 ppb.

Dimethyl sulfide ($\rm (CH_3)_2S$) is responsible for the smell of the sea (in low concentrations); it too has a cabbagy smell.

Dimethyl trisulfide ($\rm CH_3SSSCH_3$) is present in relatively smaller amounts but it has an even stronger odor. The detection threshold is around 1 part per trillion, and it is apparently a strong insect attractant.

(To keep the notes below in context, in my original answer I said that a plot point in "The Walking Dead" was that zombies couldn't smell delicious humans if they were wearing coats smeared with rotting flesh. I suggested that when the zombie apocalypse arrives, packing your pockets with putrid potatoes might work, too. Now I'm not so sure. Can zombies distinguish between polyamines and sulfur compounds? Perhaps they're stench connoisseurs.) 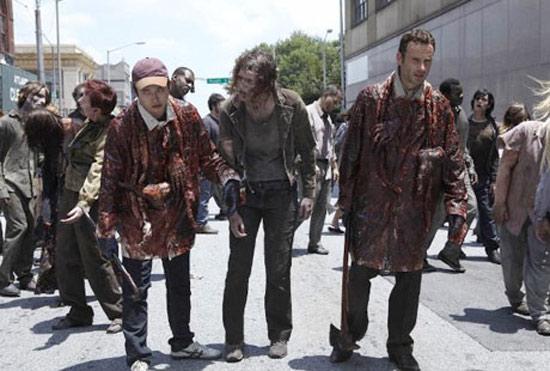 It is a combination of potato and a fungus or bacterium that causes a potato to rot and produce the offensive odor. A major contributor to the odor is dimethyl disulfide which has been identified as a key component of the emitted volatiles (see here)

Although the above reference doesn't mention it (at least not in the abstract) dimethyl disulfide is often accompanied by hydrogen sulfide, dimethyl sulfide and dimethyl trisulfide, the trisulfide being particularly odiferous.

Not only is the odor of rotting potatoes extremely unpleasant, but it has been reported to be lethal. Certainly eating rotten potatoes can be lethal (solanine poisoning).