Chemistry - Under what circumstances would azeotrope exist in non ideal solutions? (when would the dew point curve and the bubble point curve meet?)

E.g. ethanol and isopropanol form azeotropes with water, but methanol does not.

Azeotropes exist if there is large enough deviation from the Raoult law. It means if the azeotrope point of the diagram is pushed enough away from the endpoint connections.

For near ideal solutions, like n-pentane + n-hexane. there is no bottleneck and onle one convex/concave chart segment.

Back to the meeting of boiling and condensation curves, they meet at the pure solvent points and eventually at the azeotrope point, if it exists.

Existance of such minimums ( or maximums ) ob the vapour diagram means there is an azeotrope. An azeotrope behaves like if it were the 3rd substance, with the same composition of liquid and vapour above it, so the curves meet there.

You can create simulations yourself by defining nonideal vapour pressure equations as $p_i(T)<>p_{i,0}(T) \cdot x_i$. It cannot be exactly calculated, as neither the mixture of pure solvent and azeotropic mixture has the ideas behaviour.

Binary Mixture Which is an Ideal Liquid 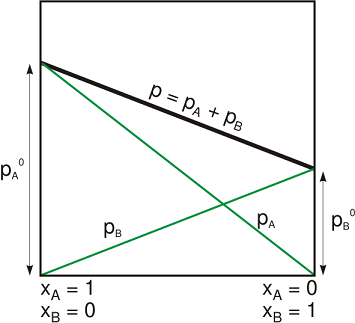 Binary Mixture Which is an Non-Ideal Liquid 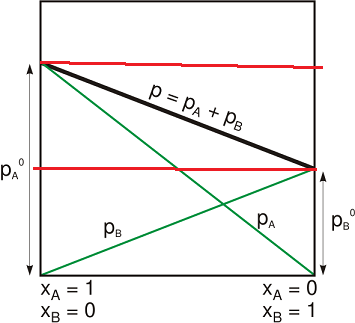 So the correct statement is that if the dew point curve goes outside the bounded region, then there must be an azeotrope.

For non ideal solutions, the dew point curve and the boiling point curve must meet at some point.

is just wrong. A lot of ideal behavior can occur with the dew point curve and the boiling point curve in the bounded region.

In chemistry there is usually some weird outlier for any general statement. I can't think of a binary system which has an azetrope where the dew point curve and the boiling point curve stay the bounded region but I'd bet that there is at least one known.

Edit - I realize now that if the dew point curve crosses the ideal line then there must be an azeotrope at the crossing point.