HP D2700 enclosure and SSDs. Will any SSD work?

Are there any SAN vendors that allow third party drives?

So, the move from G6 and G7 HP ProLiants to the Gen8 variants forced a disk carrier form-factor change. HP went to the SmartDrive carrier with the Gen8 product, and that's created a whole set of issues that impact SSD compatibility.

I like the idea of choosing the most appropriate options for my environments and applications, within reason. With G7's, I could use HP's SanDisk/Pliant SAS enterprise SSDs when needed, but also Intel or other low-cost SandForce-based SSDs where it made sense. If using an external enclosure like a D2700 or D2600, I could also use sTec SSDs (which offer another quality SAS SSD option). Drive carriers for the old form-factor were easily obtained.

With Gen8 servers, much of this isn't possible. From the difficult access to the SmartDrive carriers to restrictive firmware and disk validation techniques to the obscenely high price of the HP-branded SSDs ($2500+ per drive), I think HP have priced themselves out of the market.

Their rebranded drives aren't stellar performers, but have tremendous endurance. That's not needed in every environment. Getting the best performance out of HP SSDs on current HP Smart Array controller also requires tuning or even additional HP SmartPath licensing. Previous controllers like the Smart Array P410 were limited by IOPS and other constraints.

A good development that may affect your application on Gen8 servers is the HP SmartCache SSD tiering. Much like LSI's Cachecade, this allows you to add SSD read caching and benefit from lower latencies where it matters. Also see: How effective is LSI CacheCade SSD storage tiering?

In general, I'm not concerned about SSD reliability in RAID setups with disk form-factors. PCIe-based SSDs introduce other concerns. I haven't had any endurance problems, but check: Are SSD drives as reliable as mechanical drives (2013)?

So what can you do?

1746-Slot z Drive Array - Unsupported Storage Connection Detected - SAS connection via expander is not supported on this controller model. Access to all storage has been disabled. 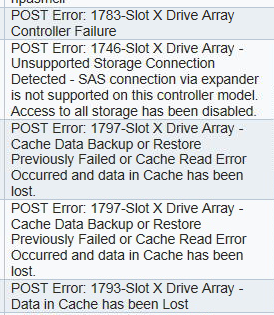 Here's an update to summarize my takeaways from this question. Thanks for the contributions!

It's fair to say that the original question presumes an OEM storage solution (HP SSDs in this case) provides a supported or "guaranteed" working solution in terms of component compatibility and system performance. This obviously comes at a premium price, and the perceived value informs how reasonable the premium is.

While I had really discarded the notion of using SSDs in this hardware refresh, the press on the Intel S3700, specifically, made an SSD solution attractive enough to consider. Looking at the equivalent HP products, I found (1) they aren't currently available, and (2) the expected price premium is 2.4x the Intel product. So, the question becomes how much effort would it take to integrate and validate the Intel solution? Understanding this leads to a very product-specific solution that runs counter to the aim of serverfault, so I'll generalize my thinking process using the answers provided:

Re-thinking the deployment with this post in mind, I considered building availability nodes with single FusionIO cards. This took the solution cost from "can't consider" down to "let's investigate further." Finally, when the actual quote came in at a better-than-expected level, I was sold.

So the bottom line is that we have two Gen8 servers sporting HP-branded FusionIO cards running in the sandbox. Endurance will be far beyond our expected use, the cost was lower than for a 15K SAS disk solution, and we'll substantially reduce power consumption and rack space. The redundancy model is different, sure, but the only thing I expect people will miss are all the blinking LEDs.

My original thinking regarding SSDs for a mission-critical database system was to wait a few years, as there will be many more mature and proven solutions at better price points. No doubt that will still be the case, but I was surprised to find something today that looks like it will do the job well.

NetworkManager is not changing /etc/resolv.conf after openvpn dns push Device /dev/sdb1 not found (or ignored by filtering) How to prevent gpg from creating .gnupg directory in user's home directory Is it possible to on-line shrink a EXT4 volume with LVM? How to change rc.d startup order in FreeBSD? Why does OpenStack distinguish images from snapshots? `mysql_upgrade` is failing with no real reason given Users unable to send over SMTP after upgrade to Exchange 2013 What exactly does netsh int ip reset reset? Setting Nginx to catch all unhandled vhosts Using a non-root to deploy a git repo to the web root When shall I use linked vs full VM clones?
Pandas how to find column contains a certain value Recommended way to install multiple Python versions on Ubuntu 20.04 Build super fast web scraper with Python x100 than BeautifulSoup How to convert a SQL query result to a Pandas DataFrame in Python How to write a Pandas DataFrame to a .csv file in Python