Just to (hopefully) get the ball rolling, here's something I scribbled down. I am sure people here will have better answers. And I have not done a lot of literature research to see whether the steps are plausible, so there might be fatal flaws... but hopefully not; as far as I know/can tell, everything here is relatively sensible.

Retrosynthesis first. I chose a Horner–Wadsworth–Emmons reaction to make the (E)-double bond, and something similar to the Reissert synthesis for the indole. It's not exactly the same because I didn't acylate the benzylic carbon, but the initial disconnection is similar. This leads to the key building blocks:

I chose the C(sp2)-C(sp3) bonds in 2 to disconnect. One can be made by SNAr with the amazing SNAr substrate 1-fluoro-2-nitrobenzene (5), and the other by Pd cross-coupling (I'm guessing cheaper ways probably exist). I've never actually seen SNAr reactions with enolates as nucleophiles, but I guess that if it doesn't work, SRN1-type conditions should still make that step possible:

As for 3, I figured it could be made from a symmetrical intermediate:

Synthesis of 3, starting from cyclopentadiene:

Next, the synthesis of 2, starting from methylglyoxal:

The indole core can be made with one of numerous methods; having had classes taught by Dr. Richard Larock, my first inclination was to use the Larock indole synthesis. The Larock indole synthesis uses an N-alkylated/acylated/tosylated 2-iodoanilines and a di-substituted alkyne to produce 1,2,3-trisubstituted indoles in one step. However, care must be taken to ensure appropriate regioselectivity of the product. The use of a TMS-substituted phenylacetylene produces a 2-trimethylsilyl-3-phenylindole (Larock, JOC, 1998, 63 (22), 7652).

The main complexity of the molecule is found in the side-chain, containing a syn-1,3-diol with alkene and carboxylate functionality; installation of a chiral alcohol $\beta$ to a ketone would allow diastereoselective formation of the diol.

The side chain may be made in a few steps from the cheap and commercially available 2,2,6-trimethyl-4H-1,3-dioxin-4-one (1), which is first deprotonated and reacted with TMSCl to produce compound 2. A Mukaiyama aldol-type reaction, mediated by a titanium (IV) compound, e.g. titanium tetrachloride or Ti(OiPr)$_3$Cl, between 2 and acrolein produces the racemic alcohol 3.

Refluxing 3 in methanol and toluene with catalytic pTSA removes the acetal-like protecting group to form the methyl $\beta$-ketoester 4. The Narasaka–Prasad reduction on 4 uses the boron reagent diethylmethoxyborane (available from Sigma-Aldrich) as a chelating reagent to permit the diastereoselective reduction with sodium borohydride to the alkenyldiol 5 (relative stereochemistry is shown).

It should be noted that the aldol reaction to produce 3 may also be performed enantioselectively, as in Singer and Carreira, JACS 1995, 117, 12360, to give the desired enantiomeric alcohol; compound 4 retains this stereochemistry, and the diol 5 would then be the single diastereomer shown. Alternatively, chiral resolution could be performed at this point, or the racemic compound could be used to produce racemic Fluvastatin. 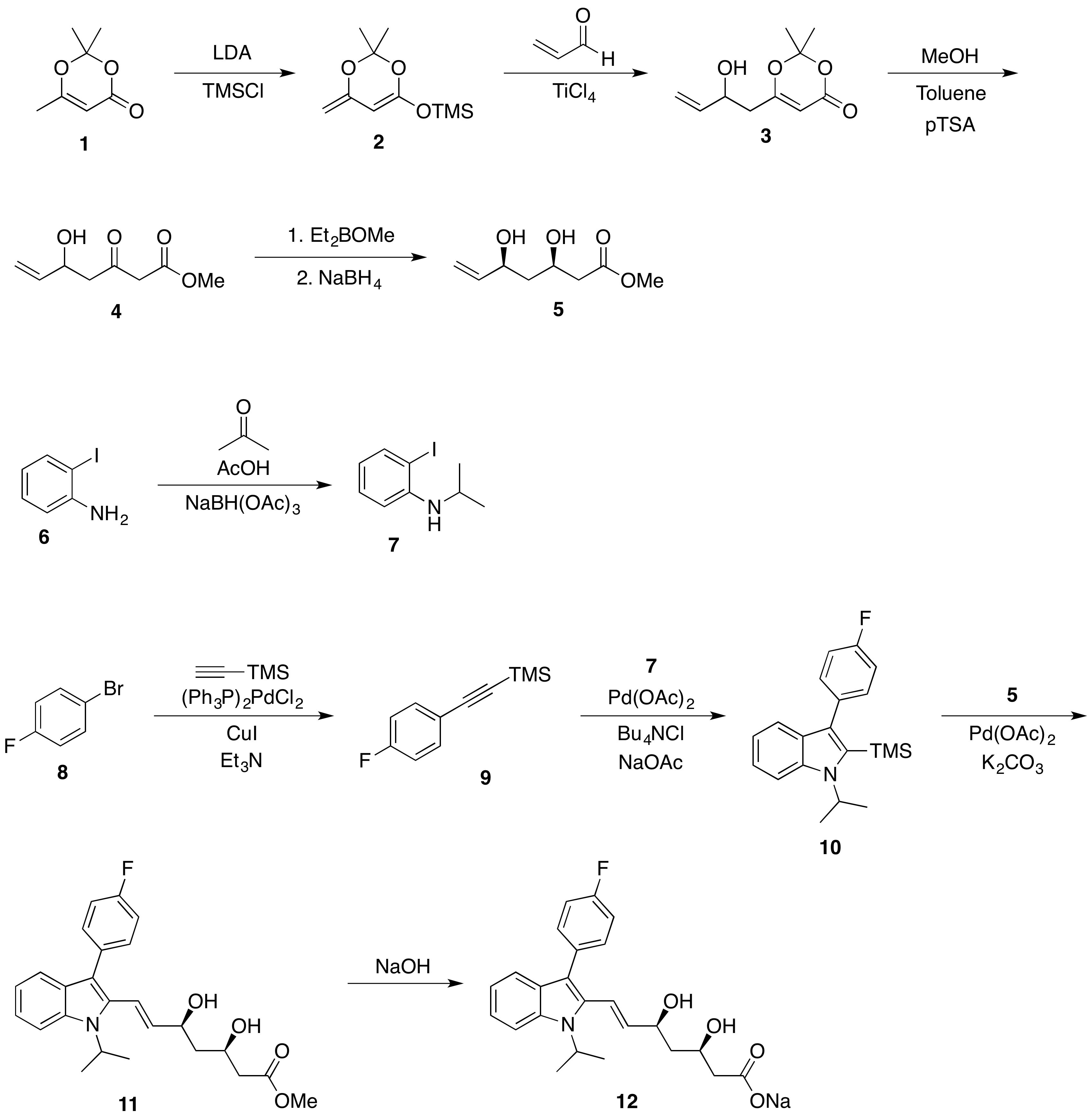 As the Larock indole synthesis allows for the use of a 2-iodoaniline and a trimethylsilyl phenylacetylene derivative, the main core is synthesised using this reaction. A palladium- and copper-catalyzed Sonogashira coupling between 1-bromo-4-fluorobenzene (6) and ethynyltrimethylsilane gives the TMS-substituted 4-fluorophenylacetylene 7. Meanwhile, N-isopropyl-2-iodoaniline (9) is synthesized from 2-iodoaniline (8, from Sigma-Aldrich) and acetone via formation of the imine in acetic acid, followed by the in situ reduction with sodium triacetoxyborohydride.

The palladium-catalyzed Larock indole synthesis is then used to produce indole 10 from alkyne 7 and aniline 9. The 2-TMS-substituted indole is capable of undergoing a Heck reaction (see Larock, JOC, 1998, 63 (22), 7652) with alkenyldiol 5 to form 11, the methyl ester of Fluvastatin. Ester hydrolysis with sodium hydroxide in water gives the sodium carboxylate, Fluvastatin, 12, in nine steps.

I thought given the challenge, it was only fair that I 'wasted' some time thinking about this myself. The following route is hopefully plausible, even if not 100% thought through. Comments welcomed, and hopefully provides some competition to Ortho's great attempt.

The synthesis proposed here disconnects fluvastatin into two main components: an indole core, and a side chain containing the stereocentres.

Fragment union is proposed to take place via selective cross metathesis (mainly because @Orthocresol made use of a HWE and I thought some variety would be nice [though seriously, cross metathesis is great for not having to use pre-functionalised precursors]).

The indole core itself is proposed to be brought together using a modern variant of a Bischler Indole synthesis by cyclisation of a linear precursor under L.A. conditions, avoiding the potential regioselectivity issues of many indole syntheses involving carbonyl condensations.

For the side-chain, a vinylogous Mukaiyama aldol reaction should provide the required stereochemistry, using a copper-bisoxazoline catalyst to control the absolute facial selectivity.

Synthesis of the Indole core

Starting from commercially available fluorobenzene 1 (Aldrich: 500G/16.30GBP) a Friedel Crafts acylation using the ethylene glycol (Aldrich: 1000mL/52.60GBP) derived acyl chloride in the presence of a Lewis acid catalyst could be carried out to give the acylated ring 2. Regioselectivity of the Friedel-Crafts is well precedented based on directing effects of the fluorine, with the 4-position both activated electronically and sterically most accessible. Due to the availability of the starting materials, poor regioselectivity at this stage not crucial, and the isomers could be separated.

Subsequent cleavage of the PMB under oxidative conditions furnishes the free alcohol 3 which may undergo an Appel-type iodination (could also do a Finkelstein via formation of the tosylate), displacement, and reductive amination with acetone to provide the indole precursor 6.

Upon treatment with a Lewis acid catalyst and heat, 6 should undergo (what I think I can call) a Bischler indole synthesis to furnish the indole core of fluvastatin 7, via this method no regioselectivity issues arise, since the two reacting partners are tethered together, with only the 5 membered ring being favoured.

Failing the milder Lewis acidic conditions, polyphosphoric acid (PPA) is common, and given the lack of delicate functionality in the molecule, this should pose no issue. 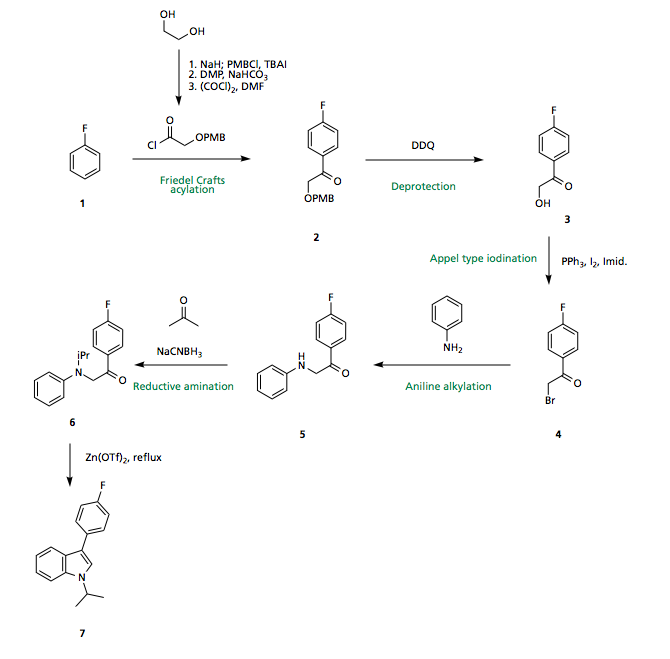 Completion of the synthesis

With the indole core 7 in hand, functionality must be installed at the 2-position. Standard Vilsmeyer-Haack conditions afford aldehyde 8 which may undergo Tebbe olefination (or similar) to provide a terminal olefin 9 capable of undergoing (E) selective cross metathesis with side chain 18 (synthesis described below). Final ester saponification using NaOH provides the sodium salt of Fluvastatin 11. 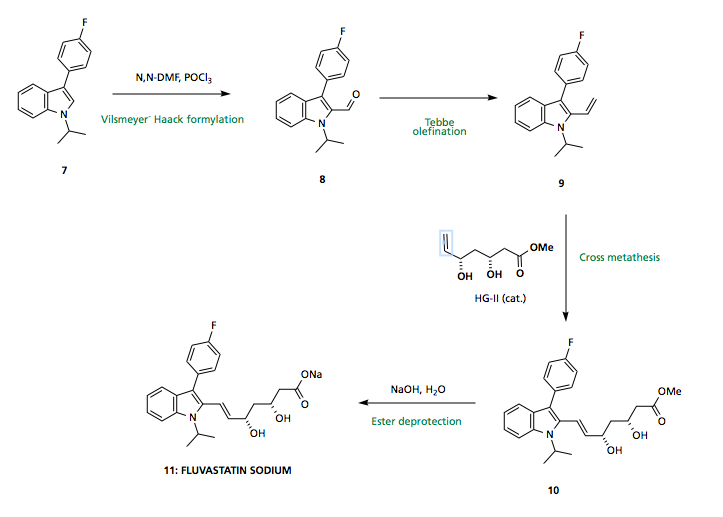 Stereoselective synthesis of the side-chain

The crucial step of this synthesis is the setting of the 1,3-syn diol with complete absolute and relative stereochemistry.

Chan's diene 12 has been shown to undergo enantio- and diastereo-selective Mukaiyama aldol reaction to furnish the 1,3-syn diol 13 using a copper-bisoxazoline catalyst. Protection of the diol as the acetonide, reductive debenzylation, DMP oxidation and Tebbe olefination then affords the required terminal olefin 18 for the planned cross metathesis. 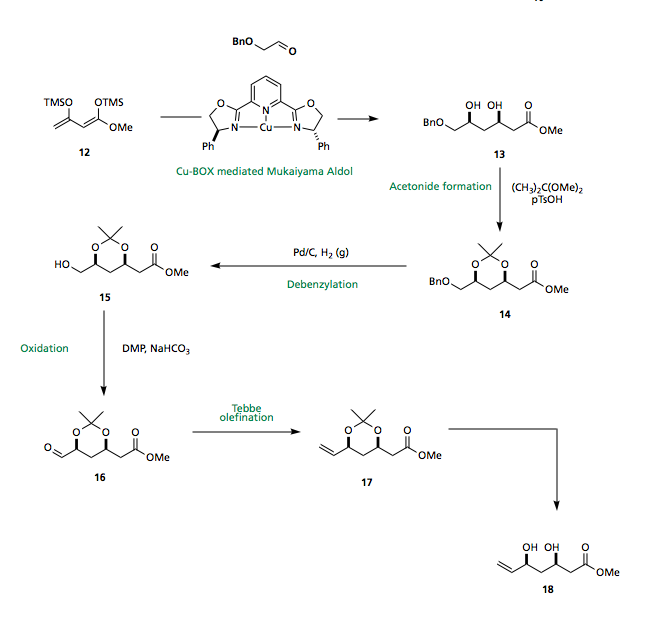 Based on the proposed synthesis, Fluvastatin Sodium 11 would be synthesised in 19 steps overall, with 13 steps in the longest linear sequence.

Then see Facile and Highly Enantioselective Synthesis of (+)- and (−)-Fluvastatin and Their Analogues Journal of Organic Chemistry, volume 75, pages 7514–7518.

(Step 6: preparation of the chiral Schiff base from 3-tert-Butyl-2-hydroxybenzaldehyde and valinol)

And for alternatives generally see:

Section 9.1 of Fluvastatin in Pubchem

I'm stuck with the lateral chain, but here are my two cents for the formation of the indole with just a few steps/reagents (I admit I'm quite a newbie, yet an enthusiast in organic chemistry).

Maybe help is not admitted, but I hope my idea could be integrated by others:

A typical Fischer synthesis for the indole might be performed with said compound and (the diazonium salt of) aniline.

The product is brominated with $\ce{PBr3}$. This results in 2-bromo-3-(4-fluorophenyl)-1H-indole

The amine might be alkylated by reaction with a 2-halopropane.

A Grignard reagent could then be formed, and by reaction with a haloalkene, a Kumada reaction could attach the side chain. Yet, I admit that I didn't come up with a decent way of preserving the stereochemistry of the side chain.