Create your shortcut and then right click to get the properties dialog and set the "Start in:" property to be your folder. 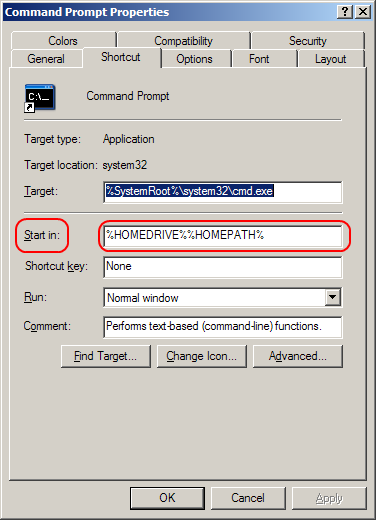 If you are running the shortcut as an administrator you should add your desired path to the target (instead of "start in"), for example:

Or you could just use a target string similar to this:

Obviously C:\Windows\System32\cmd.exe is to run cmd. The /k carries out the command by string and continues. The string is the "c: & cd c:\drv\bat". Within the string, the c: just changes the drive letter. The & ties both commands together. And the cd c:\drv\bat is basically a change directory. Also one thing to note, the cd c:\drv\bat should also change drives.

There's more than one way to skin this cat, for sure.

A batch file could also do it for you. This will start you off in the Program Files directory on the C drive:

Especially make sure to use the /D switch, if you're changing to a different drive than where CMD normally starts you.

The Open Command Window Here PowerToy for Windows XP is also rather handy for going straight from an Explorer session, into a CMD console at a certain directory.

You can use the AutoRun string value in one of the following Registry keys, to essentially automate the above for all CMD sessions.

For all users on this machine:

If the AutoRun value doesn't exist, create it as a REG_SZ type (also known as String Value). For Data, you can either put the path to a batch file like the one above (remove the ECHO and CMD lines) or just insert the CD command as shown in the above example.

The up-side of pointing the Registry to a batch file, instead of just adding the command, is that you can add in as many AutoRun commands as you like to the batch file. This way you can create custom prompt formats or script other tasks you want done at every launch of CMD.

One thing to keep in mind if you make these Registry changes though, is that they may affect the behavior of other batch files. Particularly, batch files may find themselves not starting in the directory they were originally written for.

As always, backup your Registry before making any untested changes.

Can you run AD on a non-Windows server?kubernetes client-go plugin exec command not found on Windows 10How can I connect to Postgres running on the Windows host from inside WSL2?Windows 2019: can't figure out why my drive is fullHow to get all processes under a session of a particular process that is using a port in Windows cmdMicrosoft Windows Server 2019 standard evaluation won't accept product code for brand new windows server 2019 essentialsA network file on windows is different for different usersHow to migrate physical server to VMware VMPrint Spooler Crashing After KB4561608 with Ricoh PrintersHow do I install an app from Windows Store using Powershell
Pandas how to find column contains a certain valueRecommended way to install multiple Python versions on Ubuntu 20.04Build super fast web scraper with Python x100 than BeautifulSoup